Africa's Population Is Projected To Blow Past China's And India's

Business Insider,
26 January, 2012
ExxonMobil is bullish on energy, which may surprise no one.  Specifically, ExxonMobil sees global energy demand rising by 30% by 2040.
One reason for this is global population growth.  According to World Bank projections cited in ExxonMobil's 2012 Outlook For Energy, the global population will grow from around 7 billion today to around 9 billion people.
A key bullish trend is the growth of the working-age population (ie those between the ages of 15 and 64) in India and Africa.
It's also interesting to see that Africa's population is expected to blow past those of the OECD, China, and India, which are all seeing lower birth rates. 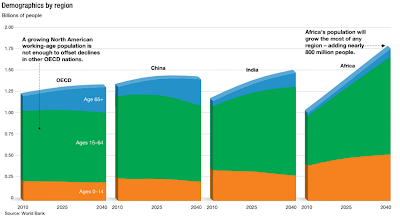 Posted by seemorerocks at 10:37