IAEA team in Iran for nuclear talks
al-Jazeera
A team of six inspectors from the UN's International Atomic Energy Agency (IAEA) has arrived in the Iranian capital, Tehran.
Iran has been accused by Western countries of developing nuclear weapons, which it denies. The IAEA team is in the country for three days to visit uranium enrichment sites and for talks aimed at allaying these concerns.
But upon arrival, the team was greeting by angry demonstrators holding images of Iranian nuclear scientist Mostafa Ahmadi Roshan who was killed in a recent bombing.

Comments from Mike Ruppert:
In the wake of the failed U.S. move to attack Iran and overthrow Bashar al-Assad in Syria, Iran has emerged as a true world power, secure in itself and now able to function uninhibitedly on the world stage while the U.S. and Europe shoot blanks. It's a fact now. Get used to it. And hope that the Iranian government shows more concern for all of mankind than the U.S. has. Europe and the west deserve, and have begged for, what they get. It's been on the map for a long time. -- MCR 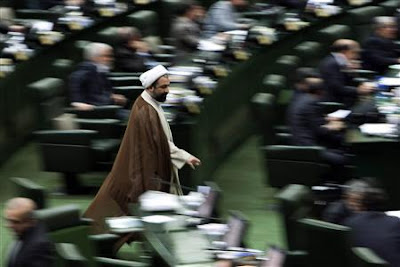 Iran to Selectively Stop Selling Oil to Certain Countries
Iran sent conflicting signals in a dispute with the West over its nuclear ambitions on Sunday, vowing to stop oil exports soon to "some" countries but postponing a parliamentary debate on a proposed halt to such sales to the European Union.
Reuters,
29 January, 2012,


The Islamic Republic declared itself optimistic about a visit by U.N. nuclear experts that began on Sunday but also warned the inspectors to be "professional" or see Tehran reducing cooperation with the world body on atomic matters.
The International Atomic Energy Agency (IAEA) inspection delegation will seek to advance efforts to resolve a row about nuclear work which Iran says is for making electricity but the West suspects is aimed at seeking a nuclear weapon.
Tensions with the West rose this month when Washington and the European Union (EU) imposed the toughest sanctions yet in a drive to force Tehran to provide more information on its nuclear program. The measures take direct aim at the ability of OPEC's second biggest oil exporter to sell its crude.
In a remark suggesting Iran would fight sanctions with sanctions, Iran's oil minister said the Islamic state would soon stop exporting crude to "some" countries.
Rostam Qasemi did not identify the countries but was speaking less than a week after the EU's 27 member states agreed to stop importing crude from Iran from July 1.
"Soon we will cut exporting oil to some countries," the state news agency IRNA quoted Qasemi as saying.
Iranian lawmakers had been due to debate a bill on Sunday that could have cut off oil supplies to the EU in days, in a move calculated to hit ailing European economies before the EU-wide ban on took effect.


But Iranian MPs postponed discussing the measure.
"No such draft bill has yet been drawn up and nothing has been submitted to the parliament. What exists is a notion by the deputies which is being seriously pursued to bring it to a conclusive end," Emad Hosseini, spokesman for parliament's Energy Committee, told Mehr.
Iranian officials say sanctions have had no impact on the country.


"Iranian oil has its own market, even if we cut our exports to Europe," oil minister Qasemi said.
Another lawmaker, Mohammad Karim Abedi, said the bill would oblige the government to cut Iran's oil supplies to the European Union for five to 15 years, the semi-official Fars news agency reported.
REFINERS
By turning the sanctions back on the EU, lawmakers hope to deny the bloc a six-month window it had planned to give those of its members most dependent on Iranian oil - including some of the most economically fragile in southern Europe - to adapt.
The Mehr news agency quoted Foreign Minister Ali Akbar Salehi as saying during a trip to Ethiopia: "We are very optimistic about the outcome of the IAEA delegation's visit to Iran ... Their questions will be answered during this visit."
"We have nothing to hide and Iran has no clandestine (nuclear) activities."
Striking a sterner tone, Iran's parliament speaker, Ali Larijani, warned the IAEA team to carry out a "logical, professional and technical" job or suffer the consequences.
"This visit is a test for the IAEA. The route for further cooperation will be open if the team carries out its duties professionally," said Larijani, state media reported.
"Otherwise, if the IAEA turns into a tool (for major powers to pressure Iran), then Iran will have no choice but to consider a new framework in its ties with the agency."
Iran's parliament in the past has approved bills to oblige the government to review its level of cooperation with the IAEA. However, Iran's top officials have always underlined the importance of preserving ties with the watchdog body.
Before departing from Vienna, IAEA Deputy Director General Herman Nackaerts said he hoped the Islamic state would tackle the watchdog's concerns "regarding the possible military dimensions of Iran's nuclear program."
PARLIAMENT DEBATE
The head of the state-run National Iranian Oil Company (NIOC) said late on Saturday that the export embargo would hit European refiners, such as Italy's Eni, that are owed oil from Iran as part of long-standing buy-back contracts under which they take payment for past oilfield projects in crude.
"The European companies will have to abide by the provisions of the buyback contracts," Ahmad Qalebani told the ISNA news agency. "If they act otherwise, they will be the parties to incur the relevant losses and will subject the repatriation of their capital to problems."
Italy's Eni is owed $1.4-1.5 billion in oil for contracts it executed in Iran in 2000 and 2001 and has been assured by EU policymakers its buyback contracts will not be part of the European embargo, but the prospect of Iran acting first may put that into doubt.
Eni declined to comment on Sunday.


The EU accounted for 25 percent of Iranian crude oil sales in the third quarter of 2011. However, analysts say the global oil market will not be overly disrupted if parliament votes for the bill that would turn off the oil tap for Europe.
Potentially more disruptive to the world oil market and global security is the risk of Iran's standoff with the West escalating into military conflict.
Iran has repeatedly said it could close the vital Strait of Hormuz shipping lane if sanctions succeed in preventing it from exporting crude, a move Washington said it would not tolerate.
"CONSTRUCTIVE SPIRIT"
The IAEA's visit may be an opportunity to defuse some of the tension. Director General Yukiya Amano has called on Iran to show a "constructive spirit" and Tehran has said it is willing to discuss "any issues" of interest to the U.N. agency, including the military-linked concerns.
But Western diplomats, who have often accused Iran of using such offers of dialogue as a stalling tactic while it presses ahead with its nuclear program, say they doubt Tehran will show the kind of concrete cooperation the IAEA wants.
They say Iran may offer limited concessions and transparency to try to ease intensifying international pressure, but that this is unlikely to amount to the full cooperation required.
The outcome could determine whether Iran will face further isolation or whether there are prospects for resuming wider talks between Tehran and the major powers on the nuclear row.
Salehi said Iran "soon" would write a letter to the E.U.'s foreign policy chief Catherine Ashton to discuss "a date and venue" for fresh nuclear talks.
"Iran's top nuclear negotiator Saeed Jalili in this letter, which may be sent in the coming days, also may mention other issues as well," Salehi said, without elaborating.
The last round of talks in January 2011 between Jalili and Ashton, who represents major powers, failed over Iran's refusal to halt its sensitive nuclear work.
"The talks will be successful as the other party seems interested in finding a way out of this deadlock," Salehi said.
Posted by seemorerocks at 11:53