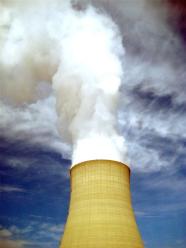 Google,
30 January, 2012
CHICAGO (AP) — A nuclear reactor at a northern Illinois plant shut down Monday after losing power, and steam was being vented to reduce pressure, according to officials from Exelon Nuclear and federal regulators.
Unit 2 at Byron Generating Station, about 95 miles northwest of Chicago, shut down at 10:18 a.m., after losing power, Exelon officials said. Diesel generators began supplying power to the plant, and operators began releasing steam to cool the reactor from the part of the plant where turbines are producing electricity, not from within the nuclear reactor itself, officials said.
The steam contains low levels of tritium, a radioactive form of hydrogen, but federal and plant officials insisted the levels were safe for workers and the public.
The U.S. Nuclear Regulatory Commission declared the incident an "unusual event," the lowest of four levels of emergency. Commission officials also said the release of tritium was expected.
Exelon Nuclear officials believe a failed piece of equipment at a switchyard caused the shutdown but were still investigating an exact cause. The switchyard is similar to a large substation that delivers power to the plant from the electrical grid and from the plant to the electrical grid. Smoke was seen from an onsite station transformer, Nuclear Regulatory Commission spokeswoman Viktoria Mitlyng said, but no evidence of a fire was found when the plant's fire brigade responded.
Mitlyng said officials can't yet calculate how much tritium is being released. They know the amounts are small because monitors around the plant aren't showing increased levels of radiation, she said.
Tritium molecules are so microscopic that small amounts are able to pass from radioactive steam that originates in the reactor through tubing and into the water used to cool turbines and other equipment outside the reactor, Mitlyng said. The steam that was being released was coming from the turbine side.
Tritium is relatively short-lived and penetrates the body weakly through the air compared to other radioactive contaminants.
Releasing steam helps "take away some of that energy still being produced by nuclear reaction but that doesn't have anywhere to go now." Even though the turbine is not turning to produce electricity, she said, "you still need to cool the equipment."
Candace Humphrey, Ogle County's emergency management coordinator, said county officials were notified of the incident as soon as it happened and that public safety was never in danger.
"It was standard procedure that they would notify county officials," she said. "There is always concern. But, it never crossed my mind that there was any danger to the people of Ogle County."
Unit 1 was operating normally while engineers investigate why Unit 2 lost power, which comes into the plant from the outside power grid, Mitlyng said. She said Nuclear Regulatory Commission inspectors were in the control room at Byron and in constant contact with the agency's incident response center in Lisle, Ill.
In March 2008, federal officials said they were investigating a problem with electrical transformers at the plant after outside power to a unit was interrupted.
In an unrelated issue last April, the commission said it was conducting special inspections of backup water pumps at the Byron and Braidwood generating stations after the agency's inspectors raised concerns about whether the pumps would be able to cool the reactors if the normal system wasn't working. The plants' operator, Exelon Corp., initially said the pumps would work but later concluded they wouldn't.
Here is the video that alerted me to this.
Posted by seemorerocks at 18:37