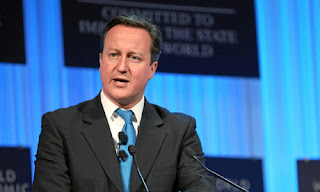 the Guardian,
27 January, 2012
The prime minister has abandoned his pledge to block the eurozone from using common EU institutions to police a new regime of fiscal integration and stiff German-style rules for the embattled single currency.
Ahead of Monday's summit of EU leaders, which is due to finalise "political agreement" on the fiscal compact treaty, the government signalled that it would not challenge a role for the European commission and, more sensitively, would also allow resort to the European court of justice (ECJ) in Luxembourg to enforce new debt ceilings and fines for fiscal miscreants in the eurozone.
Last month David Cameron shocked the rest of Europe by vetoing new EU laws on fiscal rigour, forcing the other member states instead to turn the pact into an international treaty between participating governments outside the EU treaties. Cameron also vowed to resist a role for EU institutions on the grounds that they served all 27 member states.
Berlin insists that the Luxembourg court should be empowered to rule on whether the new "debt brakes" are being properly enshrined in national law across the eurozone and applied.
A senior German official said the European commission would act as "referee" in deciding whether eurozone members were breaching the new rules. A commission ruling would be accepted by eurozone governments unless overturned by "reverse majority voting" and any signatory government could then take the perceived sinner to the European court.
Senior diplomatic sources in Brussels made clear on Friday that while Britain still had reservations about these provisions, there would be no attempt to block them and no quick legal challenge.
Cameron is understood to have made it clear to José Manuel Barroso, the president of the European commission, in a telephone call on Wednesday that Britain would no longer object to using the ECJ to enforce the new treaty. "There were a number of issues in the heat of the moment," one EU source said of the prime minister's threat in December to block the use of EU institutions to police the fiscal compact. "But they quickly disappeared."
Cameron's concession marks a significant watering down of his previous position and represents a victory for Nick Clegg, who has been urging the prime minister to recover ground after wielding the veto. The deputy prime minister lobbied hard inside Whitehall for Cameron to drop his objections to the use of EU institutions to enforce the compact.
The prime minister raised concerns about the use of the ECJ as recently as 6 January. He told the Today programme on Radio 4: "You can't have a treaty outside the European Union that starts doing what should be done within the European Union and that goes back to the issue of safeguards.
"There are legal difficulties over this. One of the problems is that the European court of justice, we all think it is a great independent arbiter, but the European court of justice tends to come down on the side of whatever 'more Europe' involves. Let me be very clear that they shouldn't do things outside the European Union that are the property of the European Union."
The abrupt change of heart by Cameron may have been prompted by German anger over the British veto. Wolfgang Schäuble, the German finance minister, highlighted concerns in Berlin about Britain when he blamed Cameron for blocking the EU from embedding the eurozone fiscal compact in the Lisbon treaty.
Asked in Davos on Friday about the failure to agree a revision of the Lisbon treaty, Schäuble said: "I would like to give you the number of David Cameron. Of course, this is not a joke. It would be much better, and better to understand for everyone outside of Europe, if we were to do what we will now have to do in our fiscal compact in the framework of European treaties."
Tory Eurosceptics warned Cameron against diluting his opposition to the use of the ECJ. Bill Cash, the veteran Conservative Eurosceptic who chairs the commons European scrutiny committee, said: "There mustn't be any backsliding. There are serious concerns about the lawfulness of these proposals. The institutions are simply not allowed to use the European commission and the [European] court of justice in an unlawful manner."
Posted by seemorerocks at 09:48