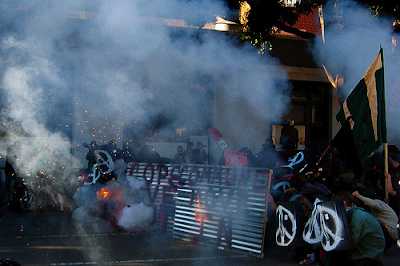 Violent police clashes again rocked the city of Oakland January 28th (#J28) as Occupy Oakland protestors attempted to occupy a vacant building. Their announcement, via a letter to the Mayor referring to the action as Move-In Day, declares their intent to use the building:
“As a social center, convergence center, headquarters, free kitchen, and place of housing for Occupy Oakland. Like so many other people, Occupy Oakland is homeless while buildings remain vacant and unused. For Occupy this is in large part because of yourselves, having evicted us twice from public space that was rightfully ours. For others it is because of the housing bubble, predatory lending, the perpetual crises of capitalism, and far reaching histories of imperialism and systemic violence.”

“As a social center, convergence center, headquarters, free kitchen, and place of housing for Occupy Oakland. Like so many other people, Occupy Oakland is homeless while buildings remain vacant and unused. For Occupy this is in large part because of yourselves, having evicted us twice from public space that was rightfully ours. For others it is because of the housing bubble, predatory lending, the perpetual crises of capitalism, and far reaching histories of imperialism and systemic violence.”

By the end of a long day of marches and failed occupation attempts, three hundred people, from a crowd that swelled at times to 2,000, were arrested. Much of the corporate media reporting on the start of the violence points the finger squarely at the protestors who are alleged to have begun the violence by pelting officers with rocks, bottles and even Improvised Explosive Devices. The claim that peaceful protestors used IEDs is on it’s face false and inflammatory, as first hand accounts and live streaming video footage of the event seems to show that protestors only threw some debris as a reaction to being pelted with explosive percussion grenades, rubber bullets, and tear gas canisters:

Via Occupy Oakland’s twitter feed:
#OccupyOakland #OO OPD claim they ordered us to disperse, after blocking us in & arresting us. Chanting "this is a hostage situation."
"For their first attempt at a kettle, the cops charged the group with police lines from the front and back. They ran towards us aggressively. Us being 1000+ peaceful marching protesters. The group was forced to move up a side street. The police moved quickly to surround the entire area; they formed a line on every street that the side street connected to. Police state status: very efficient. They kettled almost the entire protest in the park near the Fox theater. AFTERWARDS, as in after they surrounded everyone, they declared it to be an unlawful assembly BUT OFFERED NO EXIT ROUTE. Gas was used, could of been tear or smoke gas."
Similar claims that law enforcement "had to deploy gas in order to stop the crowd and people from pelting us with bottles and rocks." after the violent clearing of the original Occupy Oakland camp had to be walked back, because there was no evidence that any such violence by Occupy had occurred:
“Oakland PD's Chief of Staff, Sgt. Chris Bolton conceded that the department was unable, at this time, to substantiate claims made by Jordan that gas was deployed in order to protect law enforcement personnel from violent demonstrators, despite the Chief's unqualified claim that evening that "the deployment of gas was necessary to protect our officers and protect property around the area and to protect injuries to others as well."


Instead, Bolton softened Jordan's initial claim. The sergeant described it as "the Chief's preliminary belief.”
The claims of the Oakland PD are especially hard to swallow after internal emails show that interim police chief Johnson lied to paint Occupy Oakland as a crime problem in order to garner support for their actions:
“In the days leading up to the Nov. 2 march on the Port of Oakland, city leaders warned about the drain on police resources.
When Jordan received an update that crime was actually down 19 percent in the last week of October, he wrote an email to one of Mayor Jean Quan's advisers.
"Not sure how you want to share this good news," he wrote. "It may be counter to our statement that the Occupy movement is negatively impacting crime in Oakland."
Police and the city said Occupy has had an ongoing impact on their ability to respond to crime.
In all of the emails there was not a single one written by Quan.”
Indeed it seems that the Interim Police Chief is not the man to solve the problems plaguing the Oakland Police Department. The Oakland PD is now facing a Federal Receivership in March.
While several cities have had to have Federal Monitors installed, this would be the first time in United States history that a department has been completely turned over to Federal control. The Federal Judge ruling in the case expressed his astonishment that the OPD is continuing using controversial and violent tactics in the face of reforms demanded almost a decade ago that still have not been implemented:
"The court remains in disbelief that Defendants have yet - nine years later - to achieve what they themselves agreed was doable in no more than five years," U.S. District Court Judge Thelton Henderson wrote.”
This may be the only way to correct the course of a police department that has long since gone off the rails and has not found the leadership from the Police Chief or the Mayor to make the badly needed reforms.  As the San Francisco chronicle noted:
“It's a step away from surrendering responsibility for the city's police to federal management. If the city doesn't clean up its act - which doesn't look likely given all the other crises Oakland now faces - the judge made it clear that receivership will be the next step.”
I lived in Oakland during the time of the  Oscar Grant murder and subsequent protests, and personally throw my support behind this action to get the department functioning for the people again. Even in basic everyday interactions, the civility required by the men and women on the force is lacking. This is creating a gap between the police and citizens that endangers all, and the department has had more than enough time to right it's own ship.
Occupiers across the country are mounting solidarity actions today (#J29) to show support for Oakland. The Rise Up Festival announced in the Move in Day letter is confirmed to still be on for today, according to Occupy Oakland’s twitter feed. The group is also asking for supporters to donate as much as they can to the Occupy Oakland bail fund.
Jennifer Slattery is a dedicated human rights activist, former private investigator, and a  member of the Occupy Movement. She lives in NY, and would be happy to answer any and all questions you might have:occupierjenvs@gmail.com

Anonymous Message To The Citizens Of Oakland
Citizens of Oakland -
Anonymous has been watching. Since the inception of Occupy Oakland,
We have been actively monitoring your behavior, and exposing the identities and sensitive
information of Officers of the Oakland Police Department;
as they have continued to act in an unprofessional and violent manner.
You tear gassed Us. You shot Us with your weapons. You arrested Us. You beat Us.
You also did this to Our Friends, and to Our Families.
We watched as you cut budgets, cut Our jobs, closed Our schools,
Our parks, and Our libraries, while leaving your own salaries alone.
We are shocked and disgusted by your behavior.
Before you commit atrocities against innocent people again, think twice.
You should have expected Us.
Posted by seemorerocks at 19:22