This seems to be a general problem - with the closure of an oil refinery in Britain and numerous closures in North America.  Along with the oil embargo against Iran supply cannot keep up with demand; and with Peak Oil no new refineries will be built. 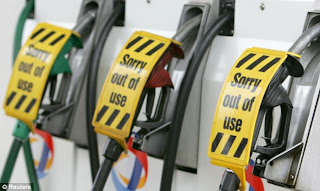 Bloomberg,
28 January, 2012
Chevron Corporation, the second-largest U.S. energy company, posted its biggest quarterly earnings decline in two years after refining losses undercut gains from record crude prices. The shares fell more than 3 percent.
The company’s U.S. refineries lost an average $2.2 million a day during the final three months of 2011 as crude-processing margins shrank and maintenance work at a California plant curbed fuel output, the company said in a statement today.
“They were hit by a huge drop-off in refining margins at the same time they had a very large maintenance project at a California refinery,” Gianna Bern, president of Brookshire Advisory & Research in Chicago, said today in a telephone interview. “We’re going to see a lot more of this to come as refining margins come under continued pressure all over the globe.”
Chief Executive Officer John Watson has been selling oil refineries and filling stations in Europe and Africa to focus on higher-profit crude production and natural-gas liquefaction projects.
Net income declined to $5.1 billion, or $2.58 a share, from $5.3 billion, or $2.64, a year earlier, San Ramon, California- based Chevron said in its statement. Per-share profit was 32 cents below the average of five analysts’ estimates compiled by Bloomberg.
Production Decline
Chevron fell 2.5 percent to $103.96 at the close in New York, after earlier falling to $103.12 for the biggest intraday drop since Dec. 14. Oil and gas production from Chevron’s wells declined 5.2 percent to the equivalent of 2.64 million barrels of crude a day.
Sales rose 11 percent to $60 billion during the quarter. For the full year, net income climbed 41 percent to a company record of $26.9 billion.
Chevron added the equivalent of 1.67 billion barrels in reserves last year, enough to replace 171 percent of the oil and gas the company pumped last year, according to today’s statement. That was the best reserves performance since 2005.
The company plans to drill exploratory wells this year in shale formations in Poland, Canada and the Utica deposit in the U.S. Northeast, Watson told analysts and investors during a conference call today. Even as other international energy companies have driven up the price of U.S. shale assets, Chevron remains “very positive” on that facet of the business, he said.
Brazil, Nigeria Problems
Chevron’s 2011 performance was marred by controversy over oil seeps off the coast of Brazil and a rig fire in Nigeria that killed two workers, Watson said.
Chevron didn’t put its “best foot forward” in the days immediately following the Brazilian seeps triggered by drilling at the company’s Frade project, Watson said today. Since then, the company has sought to improve communications with Brazilian regulators incensed by the incident, he said.
In Nigeria, two rigs have been mobilized to drill a relief well at the site of an offshore gas well that has been burning since it erupted on Jan. 16, Watson said today. The size of the flame has been reduced and an investigation is underway to determine the cause, he said.
Commodity Prices
Brent oil futures, the benchmark for two-thirds of the world’s crude, climbed 25 percent to a record fourth-quarter average of $109.02 a barrel. Chevron gets 74 percent of its oil outside the U.S.
Gas futures traded in New York dropped 13 percent from a year earlier to average $3.48 per million British thermal units, the lowest fourth-quarter average since 2001. Intensive drilling techniques that enabled explorers to tap shale formations helped boost total U.S. gas production by 7.4 percent in 2011, swelling supplies and depressing prices, according to Energy Department figures.
Rising labor and raw-material costs eroded some of Chevron’s gains from higher crude prices during the fourth quarter, Brian Youngberg, an analyst at Edward Jones & Co. in St. Louis, said today in an interview. Chevron’s oil and gas business earned $23.62 per barrel of output, down from $25.94 during the July-to-October period, he said.
Exxon Mobil Corp. (XOM), based in Irving, Texas, is the largest U.S. energy company. Exxon Mobil will report its fourth-quarter results Jan. 31.
Posted by seemorerocks at 16:59