Iran actions against the EU

More confirmation of the story I covered last night.  It would serve them right!
PREEMPTIVE STRIKE: Iran Could Turn Off EU Oil Supply Early 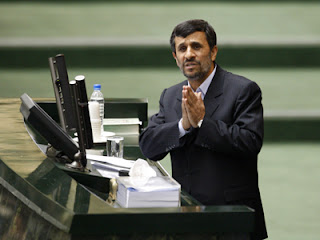 Business Insider,
26 January, 2012
In a pre-emptive strike on the European Union, Iran is set to immediately halt exports to the region in advance of the oil embargo imposed on it, der Spiegel reports.
The European Union sanctions on Iranian oil, announced earlier this week, will only come into effect on July 1, in an attempt to give countries time to look for alternate sources.
However, the Iranian government has proposed a bill — which will be voted on in parliament (the Majlis) this weekend — that could make things difficult for struggling southern European economies like Italy, Greece, and Spain, which depend so heavily on its oil.
Hossein Nejabat, a member of the Majlis Commission on Energy, said that the countries inclined to impose sanctions needed to realize they would only backfire on them, Iran's Press TV reported.
And he could be right. According to Iranian lawmakers, the EU nations account for only 18 percent of Iran's oil sales, and it is not impossible to imagine they could find other buyers. Europeans argue that the continent is one of the major customers of Iranian oil, with 500,000 barrels being shipped in daily, according to der Spiegel.
The IMF has also warned of the consequences of the embargo, saying it could drive up prices by 20 to 30 percent.
Posted by seemorerocks at 10:18