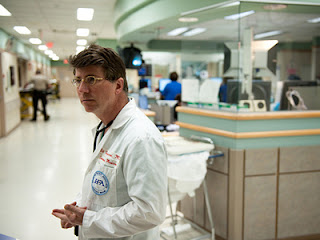 Business Insider,
30 January, 2012
Bank of America isn't the onlybusiness going to shady lengths to keep its customers hush-hush about poor service.
The Washington Post reports doctors have been asking their patients sign agreements barring them from writing negative posts on consumer review websites like Yelp, DoctorBase and RateMDs.com.
Though few of us research our doctors online, according to a 2010 Pew survey, the medical profession's reputation is under siege, with hospitals anxiously rolling out luxe ammenities to woo wealthy patients, while the rest of America struggles to make healthcare payments amidst rising premiums.
Keeping business afloat and one's good name intact seems crucial, however, many doctors using these agreements which prohibit patients from publishing negative reviews online and elsewhere may be unnecessary.
In 2009, Tara Lagu, a research scientist at Baystate Medical Center in Boston examined 33 consumer rating sites and found that 88 percent of the reviews for 300 Boston-area doctors were postive. The main complaints were wait times and parking, and few discussed "specific aspects of care," Lagu told the Post.
But while this bodes well for doctors, it doesn't mean consumers shouldn't do their homework or agree to sign one of the "gag-orders." Legal battles often ensue when a patient agrees to stay mum, and then posts a negative review online, as one patient the Post spoke to learned the hard way. Doing so can also deprive other consumers from making informed decisions.
If patients want to sound off on a sub-par doctor, they should decline to sign the gag-order and talk to other doctors about their experience. Once they've gathered enough evidence, they can go to their state's medical society or licensing board to file a grievance. For more information on how to file a medical complaint, click here.
Read the Washington Post's article on doctors' do-not-talk contracts HERE
Posted by seemorerocks at 12:13