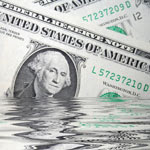 Business Insider,
28 January, 2012
With its announcement this week that it will keep interest rates near zero until at least late 2014, the Federal Reserve has put another large crack into the foundations underlying the US dollar. In a misguided attempt to provide clarity and transparency, Ben Bernanke has instead laid out a simple road map for economists and investors to follow.
The signposts are easily understood: the Fed will stop at nothing in pursuing its goals of creating phantom GDP growth, holding down unemployment, propping up stock and housing prices, and monetizing government debt. To do so, it will continue to pursue a policy of negative interest rates, while ignoring the collateral damage of unsustainable debt, virulent inflation, misallocated resources and credit, suffering yield-dependent retirees, and a devalued U.S. currency.
Not surprisingly, precious metals and foreign currencies rallied strongly on the news - with gold up more than 4.3% and the Dollar Index down nearly 1.6% in the days following the announcement. The Dollar Index is now down more than 3.5% from its highs in mid-January.
In coming to the momentous decision to extend the Fed's prior low-rate promises by another 18 months, Bernanke and his cohorts relied on a somber view of the economy that is at odds with the sunnier view presented the night before by President Obama in his State of the Union address. To justify holding rates so low for so long, the Fed is choosing to ignore the fact that CPI inflation is currently running north of 3%. Instead, it has conveniently chosen to look at a hand-picked alternative measure, the chain-weighted core PCE, which comes in just a shade below the Fed's arbitrary 2% target. How convenient.
After some changes in key membership at the Federal Reserve's policy-setting Open Markets Committee, in which a few long-time hawks were put out to pasture, the Fed has now established itself at the extreme dovish end of the policy spectrum. Among other central banks around the world, it may now be outflanked only by some very profligate ones in South America and sub-Saharan Africa. Unfortunately, the FOMC has its hands on the wheel of the world's reserve currency, and therefore its decisions may lead the planet into financial chaos as long as other nations are content to follow the Fed farther and farther into a swamp of liquidity. To paraphrase Pete Seeger's protest of the escalation of the war in Vietnam, "we are waist deep in the Big Muddy and the damn fool yells 'press on.'"
The only bright side of the announcement is that it provides precious-metal and foreign-equity investors a fairly good sense that they are on the right side of history. In order to keep rates low, especially at the long end of the yield curve where it matters most, the Fed must continually print money to buy U.S. Treasuries. This will likely push more investors into gold and away from dollar-denominated assets.
As a testament to their own faith in themselves to forecast economic conditions, 6 of the 17 voting FOMC members indicated that they would have preferred to keep rates close to zero at least through 2015. Some even had the audacity to prefer no change until 2016! This comes from the body that couldn't predict the 2008 financial crisis, even while it stared at them from point-blank range. To look into a completely uncertain future and determine that negative interest rates can persist for another four years without igniting inflation is to me the height of economic insanity. Sadly, the inmates have the keys to the institution.
The lunacy persists in the rest of the government as well, with Congress and the White House still failing to address our nation's long-term debt issues. The Fed's commitment gives these politicians a "Get Out of Jail Free" card to continue avoiding responsibility. The deficits will be monetized, so no real efforts need be made to cut spending or raise taxes on middle-class Americans. Central to these plans is the assumption that the rest of the world will happily park their savings in U.S. dollars forever. If the latest announcement does not disabuse the world of this notion, I don't know what will.
As long as interest rates remain far below the rate of inflation, the U.S. economy will fail to equitably restructure itself for a lasting recovery. As a secondary effect, U.S. savers will likely continue to suffer from a lack of yield and a weakening currency. In the end, the collapse of the U.S. economy will be that much more spectacular due to the great lengths we have gone to postpone it.
Original article HERE:
Posted by seemorerocks at 07:32