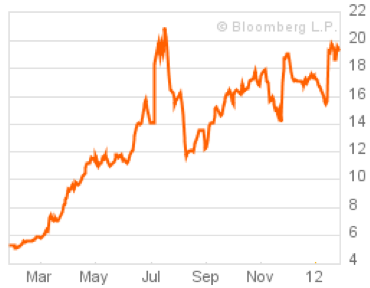 Portugal has not seen the same reprieve on short-term (here, 3-year) borrowing costs since December as have Italy and Spain.
Portugal is stealing some of Greece's limelight right now, with yields on three-year government bonds topping 21% today.
That's a record high for the troubled country, which is struggling to pay off a mountain of debt with an economy that's expected to contract by 3.1% this year.
Portugal received a €78 billion ($102.6 billion) bailout package from the European Union, European Central Bank, and International Monetary Fund last year, but now analysts and politicians are speculating that it will need at least another €30 billion ($39.5 billion) in order to stave off a credit crunch, at least according to a powerful lobbyist who has been involved in the bailout talks .
Continuing tight credit conditions and worsening economic prospects "are increasing the perception that Portugal might not be able to avoid a default."
What's more, Portugal is (unsurprisingly) denying any possibility that it will ask for or get more aid. "I can reaffirm that Portugal will not ask for a renegotiation of its bailout, we will neither ask for more money nor for more time," said Prime Minister Pedro Passos Coelho earlier this week.
While on some level it is crucial for the country to sustain the idea that it is meeting its debt obligations until it has more aid in the bag, the truth might be that the gig is up; it's just unlikely that Portugal will continue to meet its debt and deficit goals amid mounting pressures, even if it complies with the troika plan.
This is much the same psychological development that took place in Greece last summer, as EU politicians realized that a managed default might be the best way to return Greek debt levels to sustainability.
Incidentally, Portugal's debt crisis is caused by much the same problems as Greece—overspending and vague public-private sector cooperation that encouraged investment bubbles. Not to mention that the Portuguese, tired of austerity and deflation, might eventually choose default as the most friendly alternative to a decade or more of recession.
But investors are not truly concerned about Portugal alone; its 2010 GDP was just €172.7 billion ($227 billion) according to Eurostat estimates. Instead, Portugal could be the instigator of larger problems. According to Global Post, French banks like Credit Agricole, Societe Generale, and BNP Paribas own a combined €6.3 billion ($8.3 billion) in Portuguese debt, while troubled Greek bank Commerzbank owns €1.4 billion ($1.8 billion).
While a Greek default may already be priced in, a Portuguese one likely is not. If Portugal goes, it might be the trigger for a downward spiral of contagion that would be difficult to stop.
Original article with references available HERE

Portugal 10 Year Yield Passes 15% For The First Time, Is Where Greek 10 Year Was In August
Zero Hedge,
16 January, 2012
As the world awaits resolution out of Greece and the debt exchange offer which even if passed today would have to cram 6 months of actual work into 54 days, the global bond vigilantes are not sticking around, and continue to attack the next weakest link - Portugal, whose 10 Year bonds just passed 15% in yield, and were trading well below 50 cents of par with CDS hitting a new record of 1350 bps.
Naturally this has brought out the ECB's crack bond buying team (only at a central bank does a "trader" need only know how to buy, selling skills are optional) which tried to put the genie back in the bottle but now it is too late.
After all, vigilantes are just wondering what form the Portuguese restructuring will take place considering that unlike Greece the bulk of its bonds have strong protections.
So if one does use Greece as a benchmark how long does Portugal have? As the third chart shows, the last time 10 year GGBs passed 15% was back in August. So Portugal has 6 months. Give or take.
Portugese 10 Year Bond Yield: 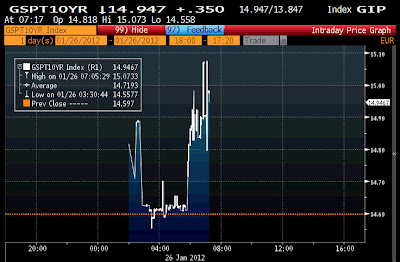 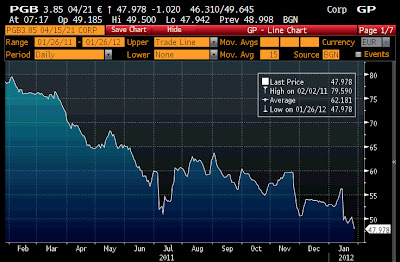 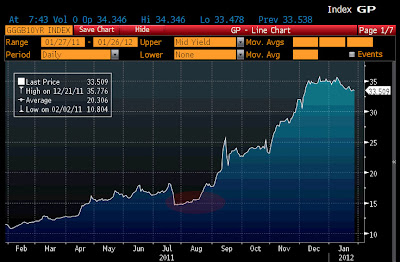