Antibiotics were once the wonder drug. Now, however, an increasing number of highly resistant -- and deadly -- bacteria are spreading around the world. The killer bugs often originate in factory farms, where animals are treated whether they are sick or not. By SPIEGEL Staff
der Spiegel,
27 January, 2012
The pathogens thrive in warm, moist environments. They feel comfortable in people's armpits, in the genital area and in the nasal mucous membranes. Their hunting grounds are in the locker rooms of schools and universities, as well as in the communal showers of prisons and health clubs.
The bacteria are transmitted via the skin, through towels, clothing or direct body contact. All it takes is a small abrasion to provide them with access to a victim's bloodstream. Festering pustules develop at the infection site, at which point the pathogens are also capable of corroding the lungs. If doctors wait too long, patients can die very quickly.
This is precisely what happened to Ashton Bonds, a 17-year-old student at Staunton River High School in Bedford County, in the US state of Virginia. Ashton spent a week fighting for his life -- and lost. This is probably what also happened to Omar Rivera, a 12-year-old in New York, who doctors sent home because they thought he was exhibiting allergy symptoms. He died that same night.
The same thing almost happened at a high school in the town of Belen, New Mexico. Less than two weeks ago, a cheerleader at the school was hospitalized after complaining about an abscess. Twelve other female students had been afflicted with suspicious rashes. All the students tested positive for a bacterium that the US media has dubbed the "superbug."
The school administration in Belen believes that the bacterium was spread on mats in the school's fitness and wrestling rooms. The facility was thoroughly disinfected 40 times, and yet the fear remains.
Fears of a Pandemic
Microbiologists refer to this bacterium as community-acquired methicillin-resistant Staphylococcus aureus, or ca-MRSA. The terrifying thing about it is its resistance to almost all common antibiotics, which complicates treatment. And, in contrast to the highly drug-resistant hospital-acquired MRSA (ha-MRSA) strains, which primarily affect the elderly and people in hospitals and nursing homes, ca-MRSA affects healthy young people. The bacterium has become a serious health threat in the United States. Doctors have already discovered it in Germany, although no deaths have been attributed to it yet in the country.
The two bacteria, ha-MRSA and ca-MRSA, are only two strains from an entire arsenal of pathogens that are now resistant to almost all available antibiotics. Less than a century after the discovery of penicillin, one of the most powerful miracle weapons ever produced by modern medicine threatens to become ineffective.
The British medical journal The Lancet warns that the drug-resistant bacteria could spark a "pandemic." And, in Germany, the dangerous pathogens are no longer only feared "hospital bugs" found in intensive care units (ICUs). Instead, they have become ubiquitous.
About two weeks ago, consumers were alarmed by the results of an analysis of chicken meat by the environmentalist group Friends of the Earth Germany (BUND), which found multidrug-resistant bacteria on more than half of the chicken parts purchased in supermarkets.
The dangerous bacteria have even been detected on one of Germany's high-speed ICE trains. Likewise, more than 10 percent of the residents of German retirement homes have been colonized by MRSA bacteria. In their case, every open wound is potentially deadly. The pathogens have also been found on beef, pork and vegetables.
Another alarming finding is that about 3 to 5 percent of the population carries so-called ESBL-forming bacteria in the intestine without knowing it. Even modern antibiotics are completely ineffective against these highly resistant bacteria. 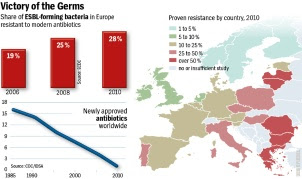 Diminishing Defenses
When the neonatal ICU at a hospital in the northern German city of Bremen was infested with an ESBL-forming bacterium last fall, three prematurely born babies died.
Infestation with multidrug-resistant bacteria is normally harmless to healthy individuals because their immune systems can keep the pathogens under control. Problems arise when an individual becomes seriously ill.
"Take, for example, a person who is having surgery and requires artificial respiration and receives a venous or urinary catheter," explains Petra Gastmeier, director of the Institute of Hygiene and Environmental Medicine at Berlin's Charité Hospital. "In such a case, the resistant intestinal bacteria can enter the lungs, the bloodstream and the bladder."
This results in urinary tract infections, pneumonia or sepsis, which are increasingly only treatable with so-called reserve antibiotics, that is, drugs for emergencies that should only be administered when common antibiotics are no longer effective.
The Spread of Killer Bugs