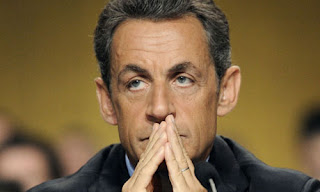 BBC,
30 January, 2012
The 0.1% levy will be introduced in August regardless of whether other European countries follow suit.
The tax is part of a package of measures set out by the president to promote growth and create jobs.
Mr Sarkozy faces a presidential election in April, but is currently trailing in the opinion polls behind his Socialist rival, Francois Hollande.
In an interview with French television, Mr Sarkozy said he hoped the tax would push other countries to take action.
"What we want to do is create a shockwave and set an example that there is absolutely no reason why those who helped bring about the crisis shouldn't pay to restore the finances," he said.
"We hope the tax will generate one billion euros ($1.3bn, £0.8bn) of new income and and thus cut our budget deficit."
Mr Sarkozy gave no further details on the tax, but a government source later told Reuters news agency it would target shares and not bonds.
French and German proposals for an EU-wide financial transaction tax were among the reasons the British Prime Minister David Cameron vetoed EU treaty changes at a summit in Brussels in December.
Mr Cameron argued that such a tax would penalise the City of London where 75% of European financial transactions take place.
Competitiveness
Among the other measures announced by Mr Sarkozy are an increase in sales tax of 1.6% which will be used to fund a reduction in the charges paid to the government by employers.
The intention is to create employment and discourage industry from moving abroad.
The president also said that labour laws would be freed up to allow companies and trades unions to negotiate on pay and conditions at a local level.
This measure appears intended to end the 35-hour working week for which France has often been criticised by economists.
All these ideas on restoring French competitiveness are directly inspired by Germany, says the BBC's Hugh Schofield in Paris.
Mr Sarkozy is reportedly hoping to rush the measure through the French parliament before the presidential vote.
However, with the election less than three months away and Mr Sarkozy a long way behind Mr Hollande in the opinion polls it is far from clear whether these ideas will ever see the light of day, our correspondent adds.
President Sarkozy received a boost on Saturday from Germany's governing Christian Democratic Union (CDU), which said that Chancellor Angela Merkel would appear at French election rallies to give her backing to Mr Sarkozy's campaign.
Posted by seemorerocks at 20:08