Breakup of the Eurozone

The Report That Will Blow Up The Eurozone 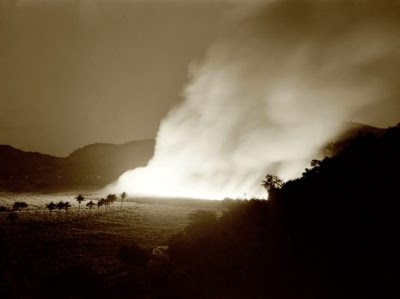 Business Insider,
28 january, 2012
From Automatic Earth
No, I’m not talking about the fact that Germany and Holland want to take over as the de facto government in Greece, as Noah Barkin writes for Reuters (that they want to do it through Brussels is a mere technicality).
Germany wants Greece to give up budget control
Germany is pushing for Greece to relinquish control over its budget policy to European institutions as part of discussions over a second rescue package, a European source told Reuters on Friday.
"There are internal discussions within the Euro group and proposals, one of which comes from Germany, on how to constructively treat country aid programs that are continuously off track, whether this can simply be ignored or whether we say that's enough," the source said.
The source added that under the proposals European institutions already operating in Greece should be given "certain decision-making powers" over fiscal policy. "This could be carried out even more stringently through external expertise," the source said.
The Financial Times said it had obtained a copy of the proposal showing Germany wants a new euro zone "budget commissioner" to have the power to veto budget decisions taken by the Greek government if they are not in line with targets set by international lenders.
"Given the disappointing compliance so far, Greece has to accept shifting budgetary sovereignty to the European level for a certain period of time," the document said. Under the German plan, Athens would only be allowed to carry out normal state spending after servicing its debt, the FT said.
Ilargi: Nor do I mean the report from the Kiel Institute for the World Economy that Ambrose Evans-Pritchard cites for the Telegraph, and which implies a second bailout for Portugal is looming near:
Investors fear mounting losses in Portugal as second rescue looms
Portugal is fighting a losing battle to contain its public debt and may be forced to impose haircuts of up to 50pc on private creditors, according to a top German institute.
A report for the Kiel Institute for the World Economy said Portugal would have to run a primary budget surplus of over 11pc of GDP a year to prevent debt dynamics spiralling out of control, even in a benign scenario of 2pc annual growth.
"Portugal's debt is unsustainable. That is the only possible conclusion," said David Bencek, the co-author, warning that no country can achieve a primary budget surplus above 5pc for long. "We won't know what the trigger will be but once there is a decision on Greece people are going to start looking closely and realise that Portugal is the same position as Greece was a year ago."
Yields on Portugal's five-year bonds surged on Thursday to a record 18.9pc, reflecting fears that the country will need a second rescue from the EU-ECB-IMF Troika. Three-year yields hit 21pc.
Ilargi: Or even the true meaning behind the steep drop in the Baltic Dry Index, on which Sebastian Walsh reports for Financial News:
Chart of the Day: The Baltic Dry Index
Statistics from the Office of National Statistics this morning showed that the UK went into reverse in the last quarter of 2011, when the economy shrank by 0.2% – but as the Baltic Dry Index shows, the global economy is looking even more worrying.
The index – often used as a proxy for the health of the global economy as it reflects the prices charged for shipping commodities such as metals, coal or grain around the world – has fallen by 61% since October. The index was at 842 at yesterday’s close – down from its 12-month high of 2173 last October.
Nick Bullman, managing partner at risk consultant Check Risks, said the index is a good way of looking at the risks to the global economy, "as it tends to be where they hit first". 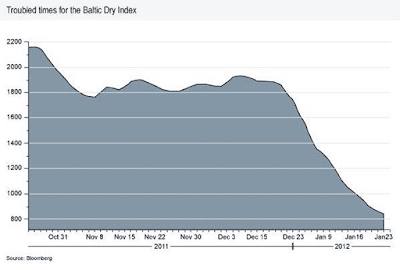