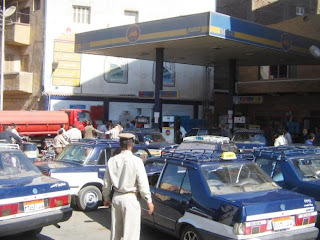 Egypt Independant,
27 January, 2012
The escalating fuel crisis pushed bakeries to close their doors on Thursday, as protesters in several governorates blocked railways and clashed in queues outside gas stations and butane gas depots.
In Minya, a police officer suffered a facial injury while trying to prevent people from cutting in line at a gas station.
In Malwai, a city south of Minya, hundreds demonstrated to demand butane cylinders. Protesters blocked the railroad.
Diesel shortages caused 50 bakeries in Minya governorate to shut down. The governor, Serag Eddin al-Roubi, said in a statement Thursday that 76,000 liters of gas would be provided to offset the shortage.
The absence of butane cylinders for more than a week in Kafr al-Sheikh Governorate motivated citizens to block the railroad.
Butane cylinder prices skyrocketed in Alexandria, reaching LE30 on the black market, while cars, which lined up outside gas stations, caused traffic jams on the main coastal.
Taxi drivers in Qena raised the fare for passengers due to the amount of time they spent waiting in line at gas stations. Clashes erupted between gas station workers and drivers due to the shortages.
The Ministry of Supply and Domestic Trade has intensified raids on gas stations suspected of criminal activity and curtailed black market sales of butane cylinders.
The Petroleum Ministry said it has supplied extra gas to governorates in Upper Egypt, especially Sohag and Minya, in an attempt to alleviate the crisis.
Posted by seemorerocks at 20:52