Occupy protesters take to the streets 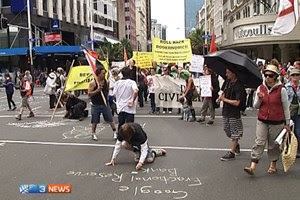 3News,
28 January, 2012
Occupy Auckland protesters marched up Queen St this afternoon expressing their anger about the eviction from the town square last week.
It was not long however until the peaceful protest became heated and marchers stormed their way back into Aotea Square where they reoccupied the area they were forced to leave by police and security guards just three days ago.
The Occupy movement members took to the city's main street this afternoon to protest against what they believe was an unlawful eviction.
Traffic was halted for the protest, with almost 100 protesters clogging the streets, much to the dislike of motorists
The march turned to a run, as the protesters raced to break down the fences.
The Occupy Auckland group set up camp in Aotea Square 106 days ago to protest against corporate greed and corruption.
A general meeting at the square is being held tonight to decide what the occupiers next move will  be.
Posted by seemorerocks at 21:51