A tiny piece buried somewhere amongst other stories....
What’s 10 million lives compared with Holywood or the Republican primaries?!
10 million face drought in the Sahel 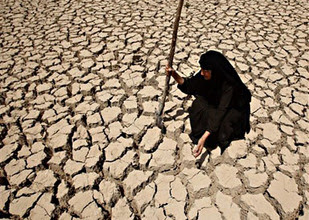 UPI,
28 January, 2012
NIAMEY, Niger, Jan. 28 (UPI) -- An estimated 10 million people across Africa's arid Sahel region are feeling the effects of drought, humanitarian agencies say.
A survey by the U.N. Children's Fund estimated there will be 1 million cases of severe malnutrition caused by the drought, with between 25 percent and 60 percent of those people likely to die without emergency assistance, the Los Angeles Times reported.
UNICEF plans to feed 1 million people in the Sahel, most of whom reside in Niger, the hardest-hit country, but have yet to raise the funds needed.
"We want to deal with a million [acute malnutrition] cases to prevent as many deaths as possible," David Gressly, UNICEF's West Africa director, said Thursday. "We need to look at this both in terms of the medium-term and long-term responses to turn this situation around."
Niger is still recovering from droughts in 2005 and 2010.
"The cycles are getting closer together, and that's a concern because households don't have time to recover from the previous crisis," Gressly said. "Mortality rates might be higher, simply because households have been under stress for so long."
The other countries affected are Chad, Mali, Mauritania, northern Nigeria, Senegal, Cameroon and Burkina Faso.
Gressly said UNICEF is determined not to let the drought deteriorate into famine, which happened in Somalia more than a year ago, resulting in a high death rate.
"The difference is we are acting much more quickly this time," he said. "I think everyone has learned from the Horn of Africa and are taking the early indicators much more seriously."
Posted by seemorerocks at 12:46