Experts Are Terrified By Greece And Its Debt Problems 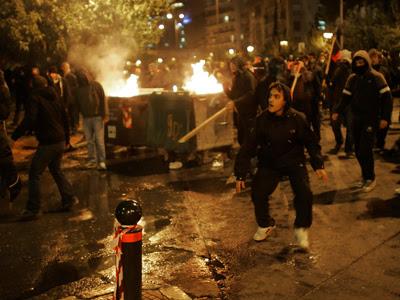 Business Insider,
27 January, 2012
Remember Greece?
It's been two years since a financial crisis erupted in the birthplace of drama, and the final act is still unfinished. A second week of talks in Athens ended Friday with no deal between the country, the European Union and private holders of Greek bonds.
Remarkably, even after the crisis became such an international worry last year that the leaders of France and Germany were actually referred to as "Merkozy," the European debt bomb could still explode, with Greece as the fuse.
Economists and investors see a Greek default as the biggest test of the world financial system since the crisis that followed the collapse of Lehman Brothers investment house in 2008.


It is also the biggest threat to what has been a successful start to the year in the U.S. stock market. The Standard & Poor's 500 index has gained 4.7 percent, roughly half its average for a full year, in just four weeks.
"If talks break down next week and it looks like they can't reach a deal, it raises all sorts of risks," says Jeffrey Kleintop, chief market strategist at LPL Financial. "The stock market could probably lose half its gains for the year."
On paper, it's hard to see how Greece could take down financial markets in the U.S., the world's biggest economy, with $15.2 trillion in goods and services churned out every year.
Consider:
— Greece's economy weighs in at euro220 billion, according to the International Monetary Fund's estimates. That translates to $285 billion, which puts Greece's economy on par with Maryland's. The U.S. sells about $1.6 billion in weapons, medicine and other products to Greece each year, a minuscule 0.07 percent of exports.
— U.S. banks say Greece on its own poses no danger to them. Unlike European banks, they're not major lenders to Greek businesses and aren't saddled with Greek government debt. In its most recent report, JPMorgan Chase, the largest bank in the U.S., said it had just $4.5 billion at risk in Greece, Ireland and Portugal combined. That's about what the bank makes in revenue in two and a half weeks.
— Many worry that U.S. banks would struggle to cover the insurance contracts they sold on Greece's euro350 billion, or about $460 billion, in government debt. But the amount of insurance taken out on that debt totals $68 billion, according to the clearinghouse for the contracts. That's hardly enough to pull down the banking system. And the banks have offset all but $3.2 billion of those contracts with other contracts. In other words, pocket change.
"The direct impact of a Greek default is almost zero," Jamie Dimon, CEO of JPMorgan Chase, told CNBC on Thursday.
So what's everybody — well, everybody but Jamie Dimon — worried about?
A breakdown in talks could trigger steep losses in stock markets in Europe and the U.S. Just as in 2008, banks could stop lending to each other, and the credit freeze could cause a market panic.
More importantly overseas, it could cause borrowing rates for Portugal and Italy to jump, pushing those much larger countries closer to defaults of their own.
That's only the beginning. A Greek default could unleash a host of larger problems. Some are already anticipated while others are likely to blindside even the closest observers, says Nick Colas, chief market strategist at ConvergEx Group. "In any complex system, you're going to have unintended consequences," he says.
He compares it to the collapse of Lehman Brothers: Analysts saw it coming, but the fallout in still caught them by surprise. A money market mutual fund found that it couldn't redeem its customers' money. Money market funds, which many considered as safe as savings accounts, suddenly looked suspect until the Federal Reserve backed them up.
At a conference on sovereign debt this week in New York, Steve Hanke, professor of economics at Johns Hopkins University, predicted that even commodity prices would plunge in response to a messy Greek default.
If Greece goes under, traders seeking safety would immediately sell euros and buy dollars, Hanke said. The dollar would soar and prices for commodities like oil and wheat, which are bought and sold in dollars around the world, would collapse. A single dollar would buy much more oil or wheat.
"If the bomb is set off by Greece, commodity prices will collapse," Hanke said.
Hanke, who has advised governments around the world on managing their currencies, argued that Greece appears bound to collapse under its debts as its economy shrinks. "Greece is doomed," he said.
So investors will be watching what happens this week in Athens. At the sovereign debt conference, Hans Humes, president of Greylock Capital Management, said this week could bring "the precedent-setting moment." He warned that if the banks and investment funds that hold Greek bonds take steep losses, then Portugal, Italy and other countries shouldering heavy debt burdens can be expected to follow Greece's lead.
It's comparable to a messy default. Traders will respond by immediately selling government bonds from those countries, Humes said. Borrowing costs will rise, and Europe's debt crisis will turn much worse.
Humes has been involved in the negotiations on the side of creditors holding Greek bonds so he has a stake in the game. But it's a scenario other money managers often cite.
"There's a fear that other countries won't negotiate at all. They'll just say, 'We'll pay you back at 50 percent or maybe less," Kleintop says.
To Colas, the deepest concern isn't how the S&P 500 reacts or whether the dollar rises if Greece drops the European currency. It's the possibility for panic, especially a run on European banks.
What if people across France and Germany crowd into banks to pull their deposits? Banks, after all, are some of the largest buyers of government debt.
"Human emotions can drive things off the rails," Colas says.
Posted by seemorerocks at 21:34