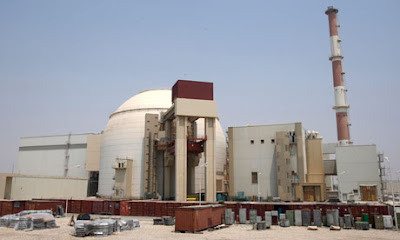 the Guardian,
27 January, 2012
Iran is due to open talks with UN nuclear inspectors on Sunday in an attempt to allay their suspicions of a covert Iranian weapons programme, the first such discussions in more than three years.
The three days of meetings in Tehran between Iranian nuclear officials and a team from the International Atomic Energy Agency (IAEA) represent the only diplomatic progress in more than a year, as tensions mount over Iran's nuclear programme and western attempts to cut off the country's oil trade.
Diplomats familiar with the visit said that the IAEA team would seek assurances that they will be able to interview key Iranian scientists suspected of past involvement in weapons research, visit sensitive sites and see documents concerning the procurement of dual-use technology. The Iranian government denies it is seeking to make nuclear weapons, insisting its research is for scientific or civil power-generating purposes.
Diplomats and analysts have played down prospects of a quick breakthrough.
If the talks were to collapse, the pressure on Iran could intensify. The IAEA has warned that Tehran could be referred to the UN security council for possible further punitive measures if it fails to cooperate.
On Thursday the Iranian president, Mahmoud Ahmadinejad, said Tehran was ready to resume broader talks with the international community, broken off over a year ago, but the office of Catherine Ashton, the EU foreign policy chief who coordinates a six-nation group handling negotiations over Iran's nuclear programme, said that Tehran had made no formal move towards restarting the dialogue.
The IAEA team, led by the agency's chief inspector, Herman Nackaerts, and an assistant director general, Rafael Grossi, is seeking Iranian explanations for evidence, described as "credible" in an IAEA report in November, pointing to past experimentation on nuclear weapons design.
"We are not saying that Iran has one, two or three nuclear devices. We are saying that Iran has, at different stages of development, technology that is directly linked to the development of a nuclear device," Grossi, an Argentinian diplomat, told the Buenos Aires Herald.
At the Tehran meeting, he said that the IAEA team would "try to draft a road map to see how we tackle specific issues, including those related to the PMDs".
The PMDs, or possible military dimensions, refer to evidence of Iranian experimentation with hemispheric arrays of high explosives of the kind used in implosive nuclear warheads, and other apparently weapons-related research. The IAEA report said that most of the evidence suggested a centrally organised weapons programme up to 2003, with less solid signs of more diffuse work, such as computer modelling, since then.
Iran has dismissed some of the evidence as fabricated and previously claimed some of the experiments referred to in IAEA reports were for non-military purposes. It has, however, prevented IAEA inspectors from talking to Mohsen Fahkrizadeh, the scientist reported to have led the most sensitive research, and his assistants. Tehran broke off the last substantive talks on the subject with the IAEA in the summer of 2008.
Olli Heinonen, Nackaerts' predecessor who led the 2008 talks, said: "They didn't provide access to the people we wanted to see. They gave some documentation in May but we were not really happy with it, when we couldn't talk to the people involved face-to-face. I went back in summer to tackle it again and there was an unwritten understanding that in September there would be a series of meetings. But then the Iranians stopped it. They made a policy decision not to go for it."
Heinonen, who is now at the Belfer Centre for Science and International Affairs at Harvard, said he expected that the IAEA team going to Iran would discuss a work plan with the Iranians.
"The important thing is that Iran gives unfettered access to people, sites and information. The first step is to agree on the process. We will probably not see an outcome for some months to come."
Speaking earlier this month, Grossi said that if Iran refuses to discuss the suspected weapons work, the IAEA secretariat would "call the board of governors, who will take the issue to the security council."
"It would be very serious for Iran as, up until now, China and Russia have blocked sanctions on the grounds that Tehran is cooperating with the agency. If the IAEA tells the world that Iran is not cooperating, Russia and China will be left without justification for their support," he said.
Russia and China have refused to support US and EU sanctions on Iran's oil trade, due to come into effect in five months time. The threatened embargoes have raised tensions in the highly militarised Gulf, which Iranian officials have threatened to block by closing the narrowest point, the Strait of Hormuz. An American aircraft carrier, the USS Lincoln has recently arrived in the Gulf, accompanied by British and French warships, and Iran's Revolutionary Guard have announced new naval exercises there next month.
Posted by seemorerocks at 09:43