This is Peak Oil 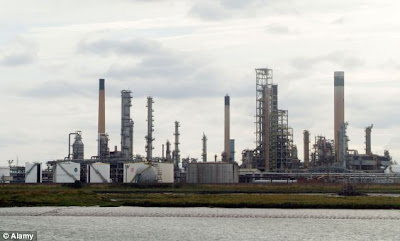 Bloomberg,
25 Janaury, 2012
The European Union’s embargo on Iranian oil threatens to accelerate refinery closures in Europe, the head of Italy’s refiners’ lobby said.
“Asian countries not applying the embargo could buy the Iranian oil at a discount and sell cheap refined products back to us,” Piero De Simone, general manager of Unione Petrolifera, said in an interview in Rome yesterday. “Italy already risks the closure of five refineries and at a European level we’re talking about 70 possible shut downs.”
The European Union this week agreed to ban oil imports from Iran starting in July as part of measures to target financing for the country’s nuclear program. The policy comes as refiners fight overcapacity and falling fuel demand. Petroplus Holdings AG, which has five plants across Europe, yesterday declared insolvency after banks called in loans.
While refiners will replace Iranian imports with Saudi Arabian and Russian oil from the Urals, De Simone says he is concerned Asian refiners will use cheap Iranian crude to undercut competitors.
“The Iranians will have to unload their production somewhere and I’m sure they’ll find buyers,” he said. “The last thing we need is more unfair competition. Either we do something at a European level or we risk a precipitous end similar to Petroplus’s for many European refineries.”
Refining margins from processing Brent into gasoline, diesel and other fuels in northwest Europe fell to loss of 26 cents a barrel in December from a profit of 51 cents a month earlier, according to a Jan. 18 report by the International Energy Agency.
For article GO HERE
Posted by seemorerocks at 16:42