Peru's vanishing fish stocks 'devastated' by corruption and growing fishmeal demand
Soaring global demand for fishmeal primarily for animal feed or fish farms, including salmon, is wrecking havoc on the once abundant fish stocks of the southern Pacific 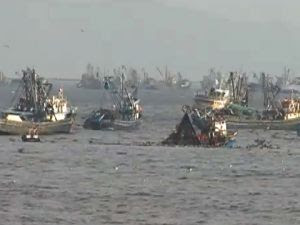 The Ecologist,
28 January 2012
The fish stocks of the southern Pacific and in particular Peru are being plundered by widespread cheating and overfishing, according to a new investigation.
Peru is the world’s second largest fishing nation after China, with the majority of its catch converted into fishmeal, a feed for farmed fish and pigs. More than a million tons a year exported mostly to Asia, in a trade worth $1.6 billion.
For article GO HERE
U.S. Cattle Inventory Drops to Lowest Since 1952 on Drought
U.S. cattle inventories fell to the lowest in 60 years after a drought in the South scorched pastures, prompting ranchers to shrink herds

Bloomberg,
28 January, 2012
As of Jan. 1, beef and dairy farmers held 90.77 million head of cattle, down 2.1 percent from a year earlier, the U.S. Department of Agriculture said today in a report. That’s the fewest since 1952. Ten analysts in a Bloomberg News survey were expecting a 1.5 percent decline.
“We had one of the biggest droughts in Texas this past year,” Chad Henderson, a market analyst at Prime Agricultural Consultants Inc. in Brookfield, Wisconsin, said in telephone interview before the report. “Guys have been ripping up pasture and planting crops. It’ll take years for this thing to build back up.”
Cattle futures in Chicago surged to a record $1.29675 a pound on Jan. 25. Texas, the top state producer, had its driest year on record in 2011, according to the National Weather Service. The drought destroyed pastures, forcing ranchers to sell or slaughter animals rather than incur feed costs driven up by corn, the main ingredient, which reached an all-time high in 2011.
For article GO HERE
Posted by seemorerocks at 21:16