From Mike Ruppert:
I am not as alarmed as Zero Hedge about this and there's good reason for that. It has been made abundantly clear that Russia and China will immediately respond militarily against the west if Iran is attacked by the US or Israel. Japan, India, Korea,  and China have refused to participate in the scheduled July embargo against Iranian oil. It will never happen because there is one key fact I am absolutely sure of. -- There is absolutely nothing that can replace Iranian oil in the global supply chain. I think Zero Hedge needs to firmly understand that. This is Peak Oil and there is zero swing production capacity anywhere to replace it. Every nation is not being caught on their own lies about production and reserves.
Iran  just turned the tables on Europe by moving towards something it can do, which is to shut off supplies to Europe. The rest of the world would still gulp down all Iranian production. Europe has no luxury of getting oil someplace else, especially with the puppet regime in Libya so vulnerable. I believe these renewed escalations are saber rattling with Europe and the U.S. essentially saying the same thing that the rest of the world said to the U.S.... If anyone cuts off anybody's oil supplies anywhere it will mean nuclear war.
Peak Oil overrides everything.
And I believe Iran will stand down on its threat to embargo Europe. I am not treating these developments as reasons to get fearful over an attack on Iran or closure of Hormuz again. If that situation changes I'll tell you but my personal anxiety levels are not elevated with these developments.  -- MCR
I hope you're right!
Iran Blinks, Delays Vote On European Crude Export Halt Even As US Escalates Military Developments Against Country 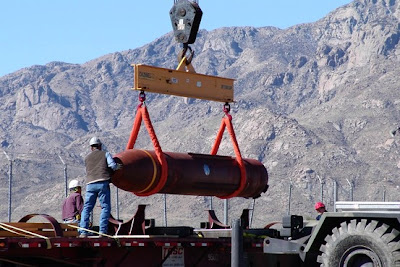 Zero Hedge,
29 January, 2012
After it was the west backing down from further unnecessary escalation with Iran two weeks ago, when Israel and the US delayed indefinitely joint naval operations in the Arabian Gulf, it is now Iran's turn to blink.

Following reports that Iran would pass a law halting crude exports to European countries, in advance of the full-blown embargo expected to take place some time by June, or as soon as European countries have found alternative supplies, we now learn that "Iran's parliament on Sunday postponed the debate over the bill."

This is happening just as nuclear inspectors are arriving in the country "to probe allegations of a secret atomic weapons program." Yet does this mean that Iran has just exposed a major weakness that the West will immediately pounce on? It is still unclear - Reuters reports that "Iran's oil minister said on Sunday the Islamic state would soon stop exporting crude to "some" countries, the state news agency IRNA reported."

Naturally the vague, open-endedness of this statement makes it quite clear that it was Iran's turn to de-escalate this time around. Or does this simply mean that Iran has been unable to conclude alternative oil trade arrangements with China, Russia and India just yet?
According to Reuters:  "Soon we will cut exporting oil to some countries," Rostam Qasemi was quoted by IRNA as saying."
Yet instead of taking this cue to attempt some additional deescalation in its own part, the US has decided to double down in further belaboring already tense relations.
On one hand, WaPo reported late on Friday that the Navy wants a commando "mothership" in the Middle East, something which Iran will be delighted to hear.
The Pentagon is rushing to send a large floating base for commando teams to the Middle East as tensions rise with Iran, al-Qaeda in Yemen and Somali pirates, among other threats.
In response to requests from U.S. Central Command, which oversees military operations in the Middle East, the Navy is converting an aging warship it had planned to decommission into a makeshift staging base for the commandos. Unofficially dubbed a “mothership,” the floating base could accommodate smaller high-speed boats and helicopters commonly used by Navy SEALs, procurement documents show.
Lt. Cmdr. Mike Kafka, a spokesman for the Navy’s Fleet Forces Command, declined to elaborate on the floating base’s purpose or to say where, exactly, it will be deployed in the Middle East. Other Navy officials acknowledged that they were moving with unusual haste to complete the conversion and send the mothership to the region by early summer.
Navy documents indicate that it could be headed to the Persian Gulf, where Iran has threatened to block the Strait of Hormuz, a crucial shipping route for much of the world’s oil supply. A market survey proposal from the Military Sealift Command, dated Dec. 22 and posted online, states that the floating base needed to be delivered to the Persian Gulf.
U.S. military officials declined to say what prompted them to give the Ponce a sudden new lease on life. But contract and bidding documents underscore the urgency of the project.
One no-bid contract for engineering work states that the military was waiving normal procurement rules because any delay presented a “national security risk.” Other contract bids are due Feb. 3. The Navy wants the conversion work to begin 10 days later on the Ponce, which is docked in Virginia Beach
Also on Friday, the WSJ reported that the Pentagon seeks a mightier bomb vs Iran, one whose name could have only been inspired by the Adult Entertainment Expo: the "Massive Ordnance Penetrator."
Pentagon war planners have concluded that their largest conventional bomb isn't yet capable of destroying Iran's most heavily fortified underground facilities, and are stepping up efforts to make it more powerful, according to U.S. officials briefed on the plan.
The 30,000-pound "bunker-buster" bomb, known as the Massive Ordnance Penetrator, was specifically designed to take out the hardened fortifications built by Iran and North Korea to cloak their nuclear programs.
But initial tests indicated that the bomb, as currently configured, wouldn't be capable of destroying some of Iran's facilities, either because of their depth or because Tehran has added new fortifications to protect them.
Doubts about the MOP's effectiveness prompted the Pentagon this month to secretly submit a request to Congress for funding to enhance the bomb's ability to penetrate deeper into rock, concrete and steel before exploding, the officials said.
The push to boost the power of the MOP is part of stepped-up contingency planning for a possible strike against Iran's nuclear program, say U.S. officials.
Alas, in light of these two additional escalating developments, we are rather confident that Iran's latest gambit to show a modicum of goodwill behind the scenes will soon be extinguished.
Posted by seemorerocks at 10:02