Fitch downgraded the sovereign credit ratings of Belgium, Cyprus, Italy, Slovenia and Spain on Friday, indicating there was a 1-in-2 chance of further cuts in the next two years. 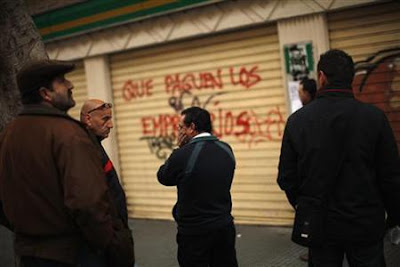 Reuters,
27 January,2012
In a statement, the ratings agency said the affected countries were vulnerable in the near-term to monetary and financial shocks.
"Consequently, these sovereigns do not, in Fitch's view, accrue the full benefits of the euro's reserve currency status," it said.
Fitch cut Italy's rating to A-minus from A-plus; Spain to A from AA-minus; Belgium to AA from AA-plus; Slovenia to A from AA-minus and Cyprus to BBB-minus from BBB, leaving the small island nation just one notch above junk status.
Ireland's rating of BBB-plus was affirmed.
All of the ratings were given negative outlooks.
Fitch said it had weighed up a worsening economic outlook in much of the euro zone against the European Central Bank's December move to flood the banking sector with cheap three-year money and austerity efforts by governments to curb their debts.
"Overall, today's rating actions balance the marked deterioration in the economic outlook with both the substantive policy initiatives at the national level to address macro-financial and fiscal imbalances, and the initial success of the ECB's three-year Long-Term Refinancing Operation in easing near-term sovereign and bank funding pressures," Fitch said.
Two weeks ago, Standard & Poor's downgraded the credit ratings of nine euro zone countries, stripping France and Austria of their coveted triple-A status but not EU paymaster Germany, and pushing struggling Portugal into junk territory.
With nearly half a trillion euros of ECB liquidity coursing through the financial system, some of which has apparently gone into euro zone government bonds, and with hopes of a deal to write down a slab of Greece's mountainous debt, even that sweeping ratings action had little market impact.
The euro briefly pared gains against the dollar after Fitch cut the five euro zone sovereigns but soon jumped to a session high of $1.3208, according to Reuters data, its highest since December 13.
Italy is widely seen as the tipping point for the euro zone. If it slid towards default, the whole currency project would be threatened.
Italian Prime Minister Mario Monti, a technocrat who has won plaudits for his economic reform drive, said he reacted to Fitch's downgrade of Italy with "detached serenity."
"They signal things that are not particularly new, for example, that Italy has a very high debt as a percentage of GDP and they signal that the way the euro zone is governed as a whole is not perfect and we knew that too," he said during a live interview on Italian television.
"They also say things that give a positive view of what is being done in Italy because there is much appreciation for policies of this government and this parliament," he said.
Fitch said of Italy: "A more severe rating action was forestalled by the strong commitment of the Italian government to reducing the budget deficit and to implementing structural reform as well as the significant easing of near-term financing risks as a result of the ECB's 3-year Longer-term Refinancing Operation."
Posted by seemorerocks at 20:09