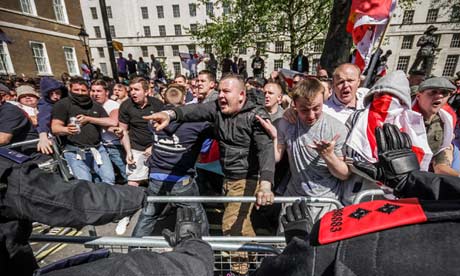 
Fears that Muslim communities across the country are facing a sustained wave of attacks and intimidation have intensified after it emerged that almost 200 Islamophobic incidents had been reported since the murder of British soldier Drummer Lee Rigby in Woolwich, south-east London, last week.

That number includes attacks on 10 mosques and follows a weekend of protests by far-right groups, the largest of which saw hundreds of English Defence League supporters stage a protest outside Downing Street that ended with bottles being thrown and 13 arrests. Four men have been charged with offences including possession of a bladed article, possession of class A drugs and public order offences following the EDL protest and a counter demonstration.
The Tell Mama hotline for recording Islamophobic incidents said 193 incidents had been reported by Monday evening, with more expected to come in. Before the death of Rigby, the service recorded an average of three or four incidents a day.
In Grimsby on Tuesday, two men reported to be former soldiers were remanded in custody at the town's magistrates court after a mosque was petrol bombed. Stuart Harness, 33, and Gavin Humphries, 37, were charged with arson with intent to endanger life. No pleas were entered and the pair are due to appear at Grimsby crown court next month.
The Tell Mama co-ordinator, Fiyaz Mughal, from Faith Matters, said he feared there would be an escalation in attacks on Muslim communities. "These things are cumulative and I do not see an end to this cycle of violence," said Mughal. "There is an underlying Islamophobia in our society and the horrendous events in Woolwich have brought this to the fore and inflamed the situation."
The latest round of Islamophobic attacks came as counter-terrorism police launched an investigation at a prison in east Yorkshire after three Muslim inmates assaulted two prison officers and held one of them hostage.
The police and the Ministry of Justice would not comment on the motive for the attack at Full Sutton prison on Sunday, but a spokeswoman for the north-east counter-terrorism unit said it was leading the investigation "given the potential nature of the incident".
"t will take time to establish the full details," the terrorism unit said. "The motivation behind this incident is for the investigation to establish and is one of a number of lines of inquiry."
Officials said none of the inmates involved were serving time for terrorism-related offences. Michael Spurr, chief executive of the National Offender Management Service, said: "This was a serious incident and my first thought is with the officer who was taken hostage – we will do all we can to help him recover from this experience." Both of the prison officers have been discharged from hospital.
Police were also investigating graffiti daubed on two privately funded war memorials in central London. The word "Islam" was quickly covered up after the graffiti was discovered early on Monday at the RAF Bomber Command memorial in Green Park and the Animals in War memorial in nearby Hyde Park.
Meanwhile, online activists Anonymous announced on Tuesday they were planning to attack the EDL.
The hacking collective that has become known around the world for a series of high-profile hacks and distributed denial-of-service (DDoS) attacks on government, religious and corporate websites, said it was planning to kick off its campaign by publishing details of the far-right group's supporters and donors.
In a statement accompanying the launch of #OpEDL, Anonymous claimed the EDL had attempted to exploit the events in Woolwich to spread division and persecute innocent Muslims.
"[You] have used this as another excuse to further spread your campaign of hate, bigotry, and misinformation. Under the guise of national pride you have instigated crimes against the innocent and incited the subjugation of Muslims," it said.
The statement added: "We will not allow your injustices, your lies, and your stupidity, to further radicalise our youth into fearing and despising their fellow man ... We do not forgive, we do not forget. Expect us !"
A 50-year-old man who was arrested in Welling, south-east London, on Monday on suspicion of conspiracy to murder, in connection with the death of Rigby, has been bailed, the Metropolitan police said night.