With the news that concentrations of carbon have reached 400 ppm, a level we haven't seen since homeo sapiens has been walking this earth, it is time to address some of the people that I have held in high regard.

These include George Monbiot and Bill McKibben of 350.org.

James Hansen recently said that if the Canadian tar sands were to be mined, it would be 'game over' for climate change.

Well guess what? – tar sands are being mined.

One of the latest reports (and each one keeps getting more dire than the one before it) says that temperatures on the planet could increase by 4C by the year 2030. (For details on this go to Guy McPherson's article HERE)

This is simply not consistent with life as we know it – including human life – let alone any sort of human civilisation.

That is why there has been increasing talk of the possibility of near-term human extinction.

Since the news of the rapid changes in the Arctic (including a whole range of positive feedbacks) has come out some of the responses of those who have been in the spotlight over climate change for some time.

George Monbiot is clearly grasping at straws to maintain civilisation as he would like it. After becoming converted to nuclear power, and then renouncing Peak Oil, he is now saying that 400 ppm is only of 'symbolic' importance, and what we have to do is get back to 350 ppm.

Sorry George, the horse has bolted, and the C02 that's in the atmosphere will stay there for a long time (all the more so that the Amazon is becoming a carbon emitter rather than a carbon sink – something that was predicted some years ago.(see also HERE)

What is it about these people that they can't recognise that the dire predictions they warned of, are coming to pass.

Instead, every new disaster becomes yet another 'wake-up call'.

This poster from 350.org is a clear example. 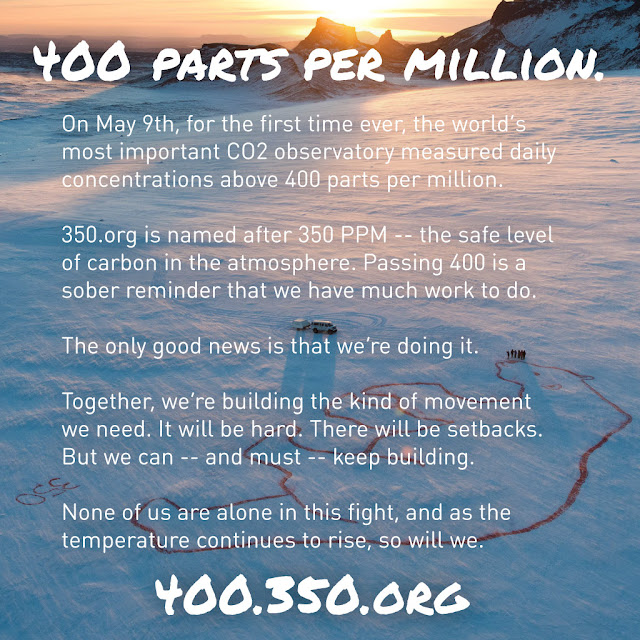 'The good news is that we are doing it'

"We're building a worldwide movement to solve the climate crisis'

Do they not know the difference between a crisis and a predicament?

This is getting into the are of cognitive dissonance when people who were formerly at the forefront of getting the message out about climate change ignore the clear signs and are putting out the 'good news' (whatever that is).

I will be the first to admit that we have to acknowledge uncertainty.

We don't KNOW how events will transpire

But, based on all the best evidence it clearly looks as if it's game's up for the climate.

Don't get me wrong - I'm not against actions such as demonstrating against the Keystone XL pipeline.

Resistance is to the prevailing paradigm is all that we have.

The problem comes when these organisations start to use their power to form public opinion to send people to sleep.

'Go out and demonstrate, change your light bulbs, fill out another petition - help to build a movement to finally persuade the politicians that they need to act'.

Perhaps the secret is the building a worldwide movement bit?

Just a small amount of research has revealed that 350.org gets corporate funding, including from the Rockefeller Brothers.

There might perhaps be an inbuilt incentive to keep the message within 'acceptable bounds'.

Don't people need to be warned about what's coming? - economic, financial, social, and finally political collapse; the end of human, industrial civilisation (whether we want it or not), and finally - the possibility of near-term extinction.

I get the feeling about the Monbiots and the McKibbens that their ideas are still stuck in the 90's when we may have had a chance of turning things round.

What I admire in Guy McPherson is his intellectual independence: his outlook has not remained static but evolved in line with the evidence that is available - and that evidence has got more and more dire.

It is time, not to advocate for more political action, but to unblinkingly look reality in the eye, and to fully acknowledge both our own, and our species' mortality (let alone the wholesale destruction of other species and everything that they need to survive on this planet.

That would be a start.

The following would be fairly typical of a mainstream presentation of climate change by Bill McKibben - on Democracy Now! - with which I have also become disenchanted.

Watch and then make up your own mind.