Extreme weather across the globe

I hope you had a merry Christmas without extreme weather, record-breaking temperatures.

This is (with the exception of the last story) all from ONE day, and from ONE source - the BBC

More than 150,000 people in Paraguay, Argentina, Uruguay and Brazil have been driven from their homes by some of the worst flooding in years.
Heavy summer rains have caused rivers to swell across a vast area.

In Paraguay, the most affected country, President Horacio Cartes declared a state of emergency, freeing up $3.5m (£2.3m) in relief funds.

The Paraguay river in the capital, Asuncion, is just 30cm (12in) away from overtopping its banks.

That could lead to widespread flooding in the Asuncion area. 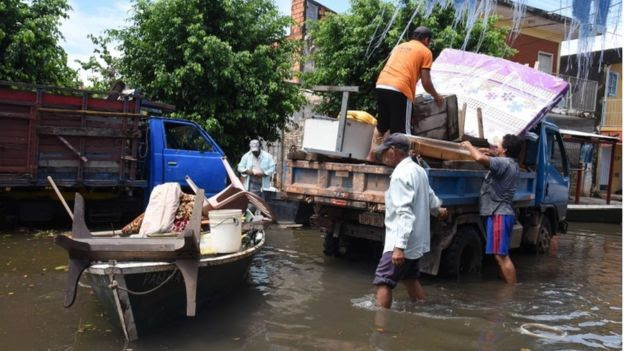 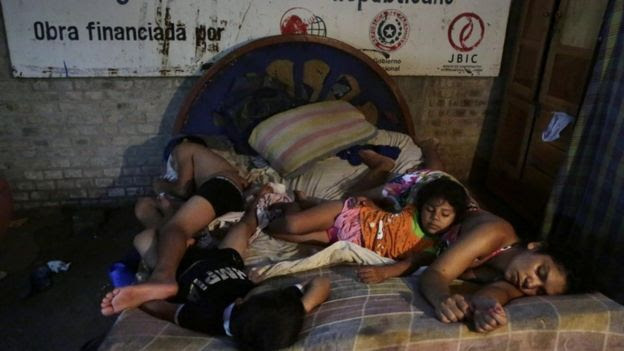 
Nearly 200 electricity pylons have been damaged or destroyed by strong winds.
Four people were killed in the country by fallen trees.

In northern Argentina, some 20,000 people have been evacuated.

At least two people have died in the floods, which have mostly affected the provinces of Entre Rios, Corrientes and Chao.

In the southern Brazilian state of Rio Grande do Sul, nearly 1,800 families in dozens of towns had been forced to leave their homes.

Heavy rain began to fall in the region on 18 December, swelling the Uruguay and Quarai rivers.

South of the Brazilian border, in Uruguay, thousands of people have been made homeless in the past few days.

But most of them have now returned home.

Dry weather is forecast for the Brazilian-Uruguayan border region in the next few days, but in Paraguay and Argentina water levels are still expected to rise. 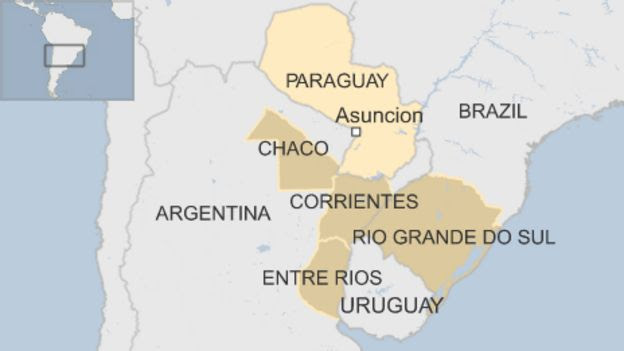 Heavy rain has caused more flooding in northern England, with homes evacuated in Lancashire and Yorkshire, and rivers overflowing in Manchester and Leeds.

Damage has included the destruction of a former pub in Greater Manchester, and a large hole has appeared in the M62.

Over 400 flood alerts and warnings - more than 20 of them severe - are in place for England, Scotland and Wales.

In pictures: North of England flooding

The River Irwell and River Roch have both overflowed, causing flooding in Salford, Manchester city centre and Rochdale, while roads in central Leeds, where a severe warning is in place on the River Aire, are also under water.

While there would be more rain in the north during Sunday, it would not be as intense or prolonged as the downpours on Boxing Day, he added.
Key developments: 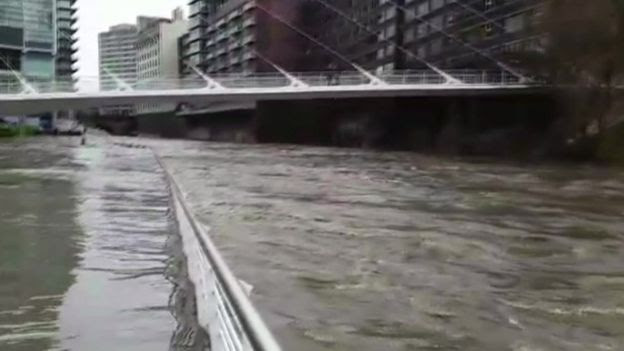 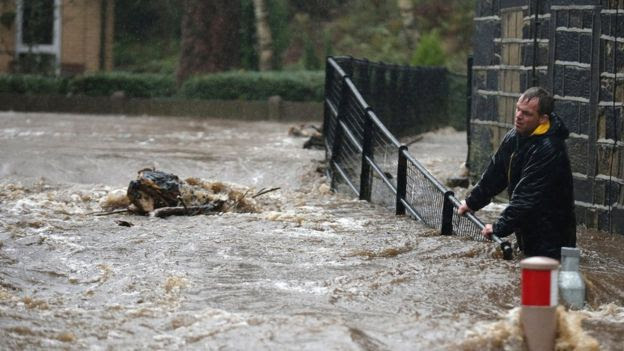 US storms: At least 14 dead in trail of destruction

A clear-up has begun after a violent storm left at least 14 people dead and destroyed homes in several US South and Midwest states on Christmas Eve.

Mississippi was worst hit, with seven people dead, while six others were killed in Tennessee.

A seven-year-old boy, who was inside a car picked up and tossed in the storm, was among the dead.

At least 20 tornadoes have been reported, knocking down trees and leaving thousands without power.

Search teams have been combing through damaged buildings in the affected states, the situation complicated by the fact many people may be away for Christmas.

"Santa brought us a good one, didn't he?" said Bobby Watkins in rural Benton County, Mississippi. 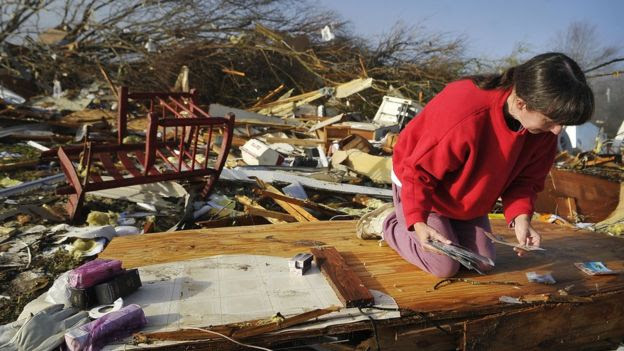 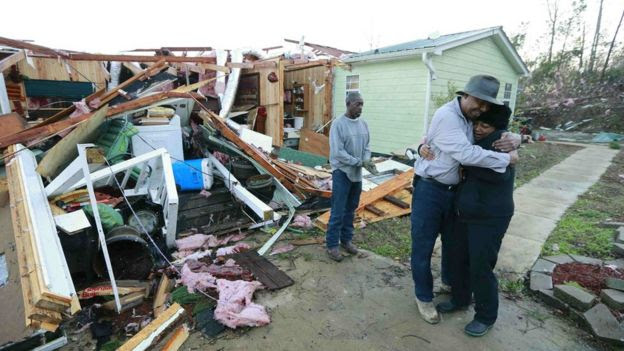 
One large tornado reportedly touched land in Mississippi and tore a path more than 100 miles (160 km) long to Tennessee.

A state of emergency has been declared by the Mississippi governor.
In Georgia, the heavy rain caused flash floods and a landslide, jamming roads with traffic.

The threat of tornadoes eased as the line of storms moved east on Thursday, but heavy rain and thunderstorms still caused flooding and travel chaos in Georgia, Alabama and the Carolinas. 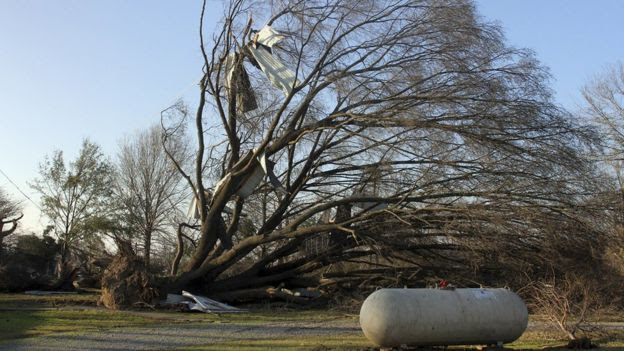 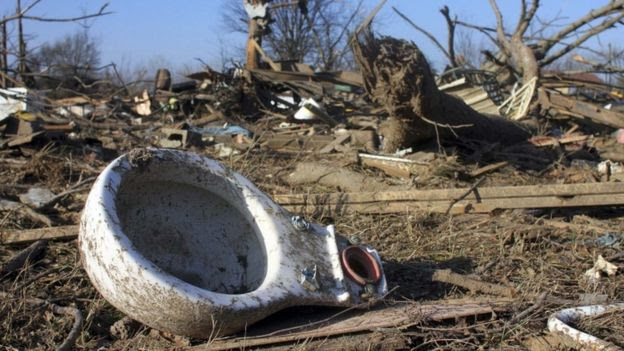 Meteorologists blame unseasonably high temperatures for the severity of the storm

The National Weather Service warned severe storms and heavy rains were also possible in Oklahoma, Arkansans, Texas and Louisiana over the weekend in its latest update.

While extreme weather in the US before Christmas is not unknown, meteorologists say that unseasonably high temperatures contributed to the severity of the storm.

Officials said 98 homes had been razed in Wye River and 18 at Separation Creek. No injuries are reported.

Hundreds of firefighters have been battling the blaze along the famous Great Ocean Road in Victoria's south-west, popular with holidaymakers.

A change to cooler weather and rain has greatly reduced the threat, but some emergency warnings remain in place.

Some 1,600 residents and tourists from the popular tourist spot of Lorne were evacuated on Friday amid fears that a wind change would push the fire towards the town, but were allowed to return on Saturday.

Many of those forced to leave their homes had to spend Christmas night in hastily-arranged shelters. 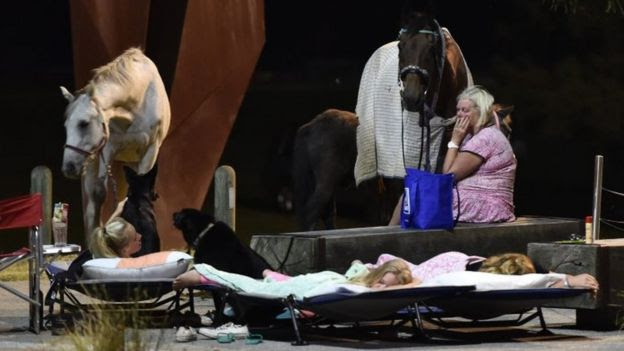 
More than 500 firefighters, 60 tankers and 18 aircraft have been involved in fighting the flames.

Victoria Emergency Management Commissioner Craig Lapsley said they were "working around the clock to bring this fire under control".

He warned that although the immediate threat had eased, the fire had the "potential to burn" for weeks to come.

Thousands of tourists typically descend on the area in the days after Christmas to visit coastal towns.

But many residents and holidaymakers were forced to flee, as festivities were abandoned when the scale of the threat became apparent.

"They (residents) were all prepared, putting their barbecues on, they were cooking away, and all of a sudden they could see the smoke coming over the hill," local resident Patrick Carey said. 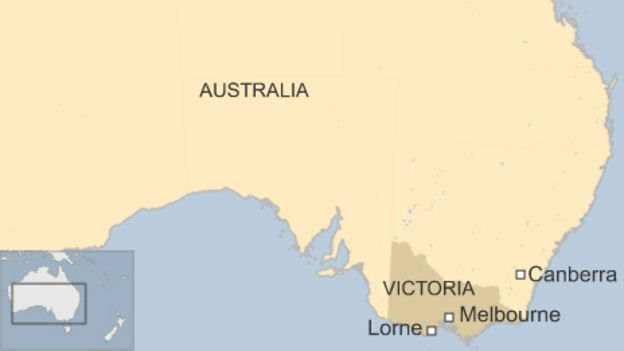 Anyone still planning to travel to the area is being asked to check emergency warnings and to avoid the Great Ocean Road if possible.

The Falls Music and Arts Festival, which is held annually near Lorne, may not go ahead because of the fires, its organisers said.

The fire began with a lightning strike on 19 December and has been fanned by strong winds and intense heat in recent days, burning across 2,200 hectares (5,437 acres) so far.

Victoria is one of the most fire-prone regions in the world.

Many bushfires are started by lightning strikes, while others are sparked accidentally by campers or discarded cigarettes.

Some are the work of arsonists.

In 2009, more than 170 people died in Victoria during Australia's worst ever bushfire disaster.

One of the longest-tracked tornadoes ever observed in December carved its way from northwest Mississippi into southwest Tennessee on Wednesday. The twister, likely to be rated at least an EF3 after damage surveys on Thursday, was part of an unusually far-flung year-end outbreak of severe storms that extended from the Gulf Coast to the Great Lakes. Although several tornadoes were reported as far afield western Illinois and central Indiana--and even Michigan experienced its first December tornado on record--the bulk of the 29 preliminary tornado reports received by NOAA’s Storm Prediction Center (SPC) came from northern Mississippi and adjacent areas. At least 10 deaths were reported by midday Friday, most of them tornado-related.

By far the most destructive storm of the day was the long-lived supercell that produced the long-track tornado noted above, as well as several others. Greg Carbin, warning coordination meteorologist at SPC, speculates that this storm was in a small region where instability from warm, moist surface air and very high vertical wind shear came together for nearly ideal supercell conditions. “Elsewhere, there were numerous supercell structures and fast-moving line segments producing damage,” says Carbin. “However, based on my interpretation of the character of radar reflectivity during the event, many of the storm updrafts were ‘stretched out’ by the intense vertical shear across the region.”

BANGKOK/MANILA, Dec 23 (Thomson Reuters Foundation) - Successive storms across the Philippines, including Typhoon Melor, have temporarily uprooted 1.7 million, aid workers said, as President Benigno Aquino distributed food on Wednesday in areas hardest hit by the disaster.
At least 41 people were killed when Typhoon Melor struck central Philippines on Dec. 15, inundating villages, damaging crops and disrupting power supplies to six provinces.
Known locally as Nona, Melor damaged or destroyed about 200,000 homes mostly in the provinces of Oriental Mindoro, Northern Samar and Sorsogon, the International Federation of Red Cross and Red Crescent Societies (IFRC) said.
Damage to agriculture and infrastructure is estimated at $99 million, according to the IFRC, which has appealed for $3.8 million to deliver emergency assistance to survivors.

Posted by seemorerocks at 09:20