.
The fire has so far destroyed more than fifty homes and thousands of hectares of forest, and is now approaching the towns of Lorne, Cumberland River and Allenvale.

Residents and holiday makers in the three towns have been asked to pack up and leave and head for a community centre in the town of Torquay.

Reports from the area say the out of control blaze along the state's scenic Great Ocean Road could reach the towns in a few hours.

The Country Fire Authority (CFA) expected many more homes to be burnt and said a lot of areas could not be reached by firefighters. 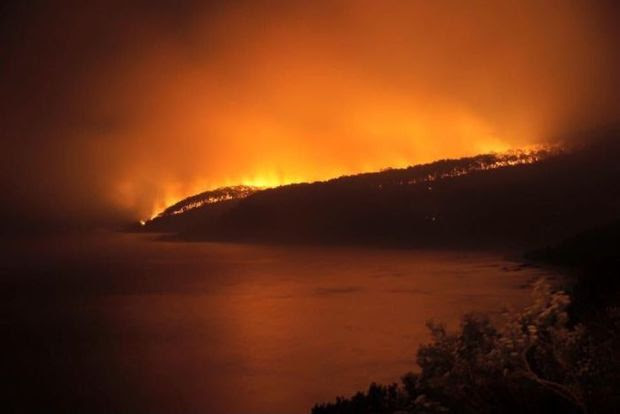 The towns of Wye River, Grey River, Kennett River and Separation Creek have been evacuated. 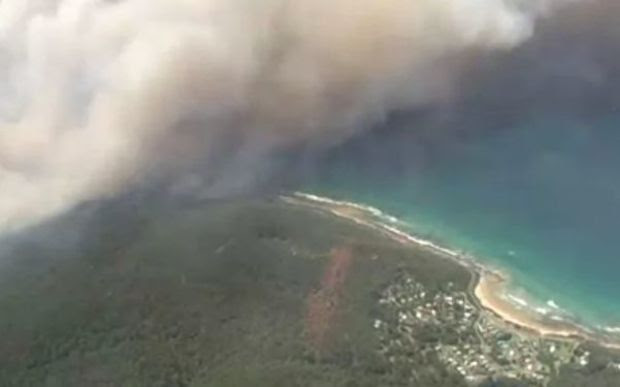 Homes have been lost in Wye River and Separation Creek.

No injuries or fatalities have been reported.

A cool change from South Australia is bringing strong winds which is expected to make the situation worse, but rain is expected overnight.

The Great Ocean Road between Skenes Creek and Torquay is closed and Victoria Police said road blocks would be in place for quite some time, possibly days

Many people who have evacuated from their homes gathered at the Apollo Bay Leisure Centre.

Tom Jacobs lives in Separation Creek and had taken shelter there.
"We took our two dogs, a cat and a chook and the car is with us," Mr Jacobs told the ABC.

He later received confirmation his home was safe. His dad, Peter Jacobs, is a volunteer firefighter and said it was the worst fire he had ever seen.

Bruce Hutchinson from Kennett River also sought refuge at an evacuation centre. When the ABC spoke to him in the afternoon, he did not know if his home survived the fire.

"It's been a very draining situation. Sorry if I'm breaking down a bit, but we're just keeping our fingers crossed," he said.

The area along the state's surf coast is a very popular spot with holidaymakers during the Christmas and New Year period.

A steady trail of cars was seen entering Apollo Bay as people in the area moved from the fire's path, with many mingling at the local beach.

Volunteer Patrick Carey said it was a normal Christmas Day for many until the smoke loomed large on the horizon.

"They were all prepared to put their barbecues on, they were cooking away, and all of sudden they could see the smoke coming over the hill, they thought it was still four hours away according to what they'd heard," he said.

"Then all of a sudden, it was an hour away and then it was half an hour away. So they just dropped everything, stopped cooking and headed here." 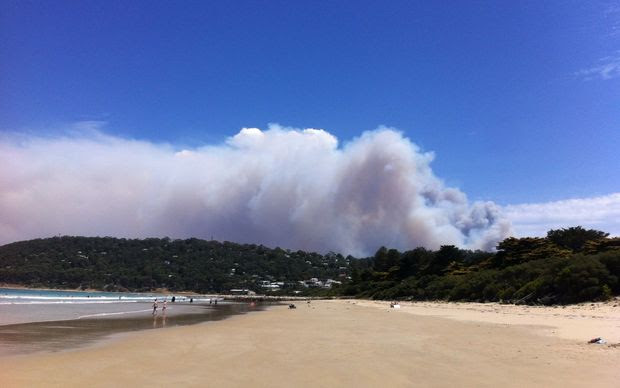 
* WHAT WE KNOW ABOUT JAMIESON TRACK BUSHFIRE * 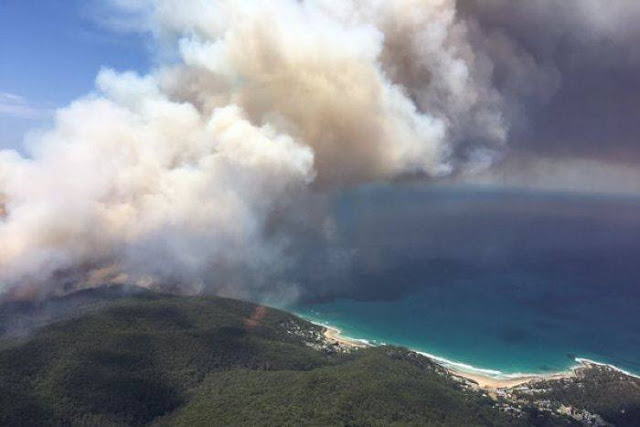 - town of Lorne being evacuated.

- cool change from SA bringing strong winds, which will make the situation worse.

- gone past Separation Creek and Wye River and heading down the coast to Kennett River.

- wind change expected which may push flames northeasterly towards Lorne.

- no injuries or fatalities reported.