A brutal sell-off in oil prices has forced Saudi Arabia’s government to post the largest budget deficit in its history, as the state’s revenues have crumbled.

The country’s deficit rose to 367bn riyals (£66bn), after government spending rose 13pc above officials’ plans in the wake of declining oil prices and a war with Yemen. A Saudi official said that the deficit was “considered an acceptable figure” under the circumstances.

Stock markets reacted positively to the government’s spending plans, as investors had feared far worse news was to come, anticipating an overshoot well in excess of 13pc. The total deficit stood at 16pc of the economy’s size, while analysts had expected a gap of 20pc. The Tadawul All Share Index made a daily gain of 0.7pc. 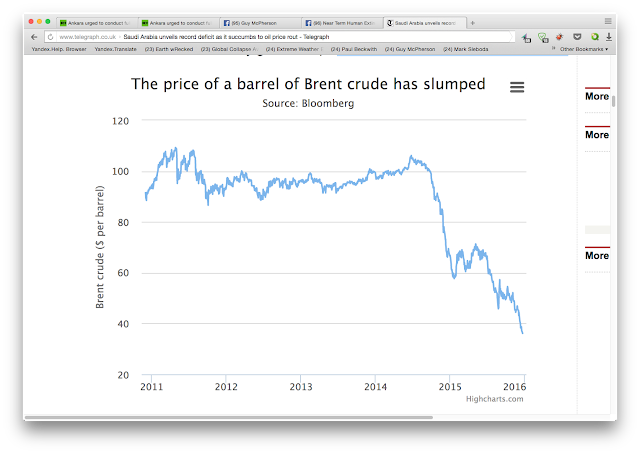 The Saudi government has planned to narrow the deficit to 327bn riyals in 2016, by cutting back spending from 975bn riyals to 840bn riyals. The state has had to resort to tapping its foreign reserves and borrowing from debt markets to finance running costs this year, as it also adopted “some procedures” to cut back spending.

It is the first time that the Saudi government has announced its spending plans at a press conference, as officials briefied the media on the extraordinary rise in the government deficit. The country's government has been dependent on oil for around 80pc of its revenues.

The price of Brent crude, an oil benchmark, has dropped from $115 (£77) a barrel last summer to touch an 11-year low of $36 in recent days. Saudi’s massive investment spending is unlikely to be sustained with oil prices at such low levels.

It came as a leading Russian official condemned the Saudi government for “destabilising” oil prices. Alexander Novak, the Russian energy minister, was reported by news agency Tass as saying that an increase in Saudi oil production was “effectively destabilising the situation on the market”.