Raining at the North Pole - in winter This storm in the far North Atlantic is the same storm that caused two tornado outbreaks and widespread flooding in the United States. Now, it’s pushing temperatures at the North Pole well above average. (earth.nullschool.net)

A powerful winter cyclone — the same storm that led to two tornado outbreaks in the United States and disastrous river flooding — has driven the North Pole to the freezing point this week, 50 degrees above average for this time of year.

From Tuesday evening to Wednesday morning, a mind-boggling pressure drop was recorded in Iceland: 54 millibars in just 18 hours. This triples the criteria for “bomb” cyclogenesis, which meteorologists use to describe a rapidly intensifying mid-latitude storm. A “bomb” cyclone is defined as dropping one millibar per hour for 24 hours.

NOAA’s Ocean Prediction Center said the storm’s minimum pressure dropped to 928 millibars around 1 a.m. Eastern time, which likely places it in the top five strongest storms on record in this region.

[Rivers are rising to record levels in the Midwest, flooding is ‘major to historic’]

“According to the center’s records, the all-time strongest storm in this area occurred on Dec. 15, 1986, and that had a minimum central pressure of 900 millibars,” Mashable’s Andrew Freedman reported on Tuesday. “The second-strongest storm occurred in January 1993, with a pressure of 916 millibars.” 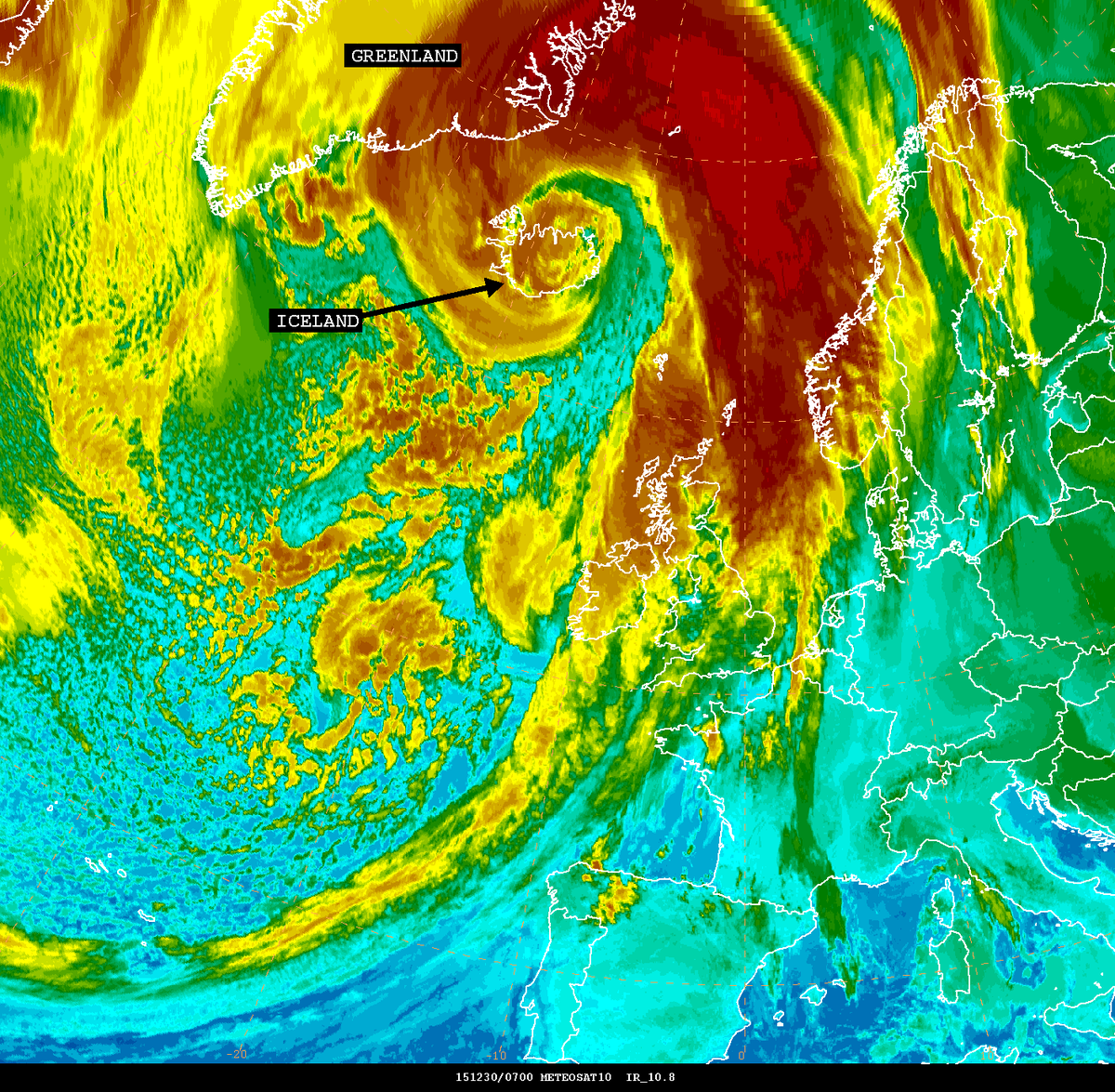 As this storm churns north, it’s forcing warm air into the Arctic Circle. Over the North Sea, sustained winds from the south are blasting at 70 mph, and gusting to well above 100 mph, drawing heat from south to north.

Although there are no permanent weather stations at the North Pole (or really anywhere in the Arctic Ocean), we can use weather forecast models, which ingest data from satellites and surrounding surface observations, to estimate conditions at Earth’s most northern location.

On Wednesday morning, temperatures over a vast area around North Pole were somewhere between 30 and 35 degrees Fahrenheit, and for at least a brief moment, surpassed the 32-degree threshold at exactly 90 degrees North, according to data from the GFS forecast mdoel.

Temperatures in the Arctic Circle were hovering around 32 degrees on Wednesday morning, using data from the GFS model. (weatherbell.com)

“Consider the average winter temperature there is around 20 degrees below zero,” wrote the Capital Weather Gang’s Jason Samenow on Monday. A temperature around the freezing mark signifies a departure from normal of over 50 degrees, and close to typical mid-summer temperatures in this region.
In other words, the area around the North Pole was about as warm as Chicago on Wednesday, and quite a few degrees warmer than much of the Midwest.

[Fallstreak holes punch through clouds like swiss cheese over the Southeast]
Meanwhile in habitable areas around the North Atlantic, winds are howling and waves are rocking the coastline. In Britain, a week of excessive rainfall has pushed rivers and streams well beyond their banks, stranding vehicles and buckling bridges.

In a blog post on Monday, the U.K. Met office said that December has been a record-breaking month for rainfall in parts of the United Kingdom. A Christmas weekend storm brought up to 8 inches of addition rainfall on saturated soil. The Met Office listed just a small portion of the December records that were set this weekend, in some cases blowing away the previous December records by 10 inches. 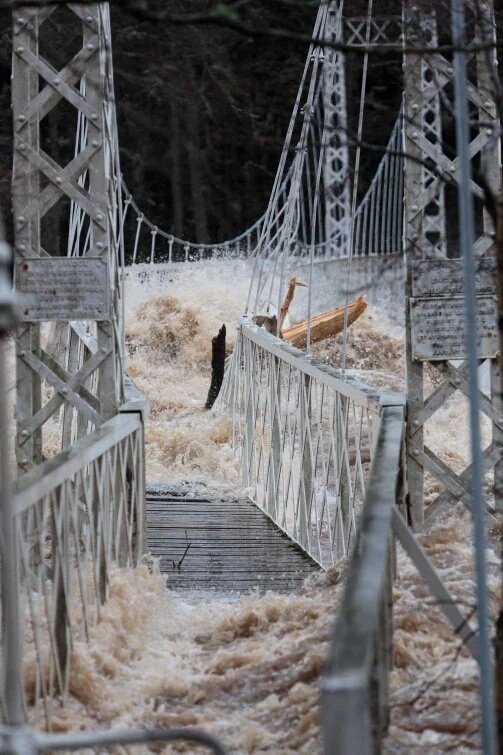 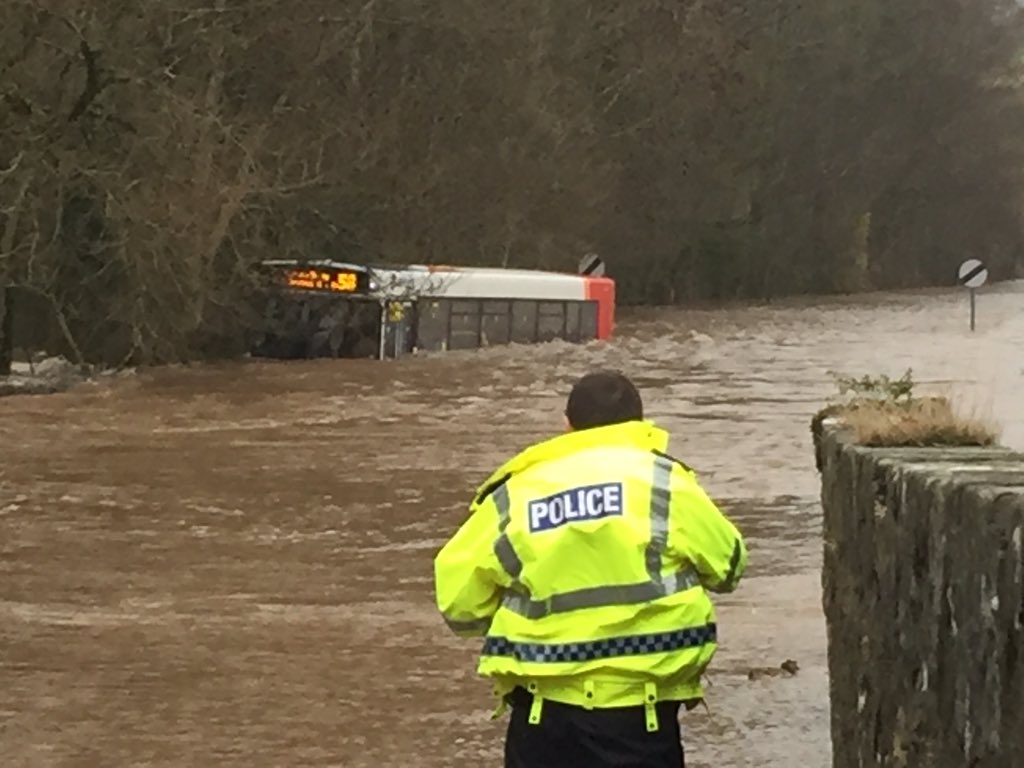