The Empire's "war on homelessness"


On any given night in the United States, there are an estimated 578,000 people who are sleeping without a roof over their head. 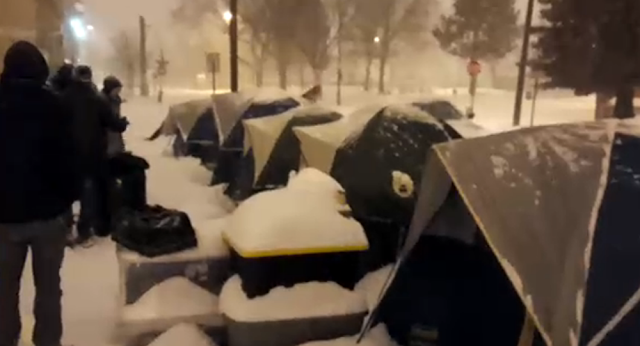 Instead of embracing the spirit of the season and being a little more giving and compassionate than normal, 15 American cities are trying to sweep their homeless members of the community out of public view, NPR reported.

Throughout the month of December, Portland, Maine has been rapidly tearing down homeless encampments. Earlier this year, the city cut funding for both shelters and expenses to provide those who couldn’t get into shelters with motel rooms.
In Seattle, Washington, the mayor declared a “war on homelessness,” and has lived up to it. There are two “legal” homeless encampments in the city, which house up to 100 people. All others have been torn down by police. Law enforcement destroyed 80 encampments in 2012, 131 in 2013, 351 in 2014, and 527 as of November 2015, the Seattle Times reported.
Eureka, California has cracked down so hard that the homeless are literally sleeping in a swamp. Leaving the camp requires high boots or hip waders, but it is the only place in the city that police do not enforce camping laws.
Also in California, in a town called Mendota, the main homeless encampment was torn down just around Thanksgiving, by request of the local water district.


Phoenix, New Orleans, Washington, DC, Boise, Kissimmee, Tucson, Salinas, Honolulu, Dallas, and Oakland were also listed in the report on cities giving those who are already having a tough time an even harder one this holiday season.
Posted by seemorerocks at 17:21