A new report by the Pulitzer-winning veteran journalist Seymour Hersh says the Joint Chiefs of Staff has indirectly supported Bashar al-Assad in an effort to help him defeat jihadist groups. Hersh reports the Joint Chiefs sent intelligence via Russia, Germany and Israel on the understanding it would be transmitted to help Assad push back Jabhat al-Nusra and the Islamic State. Hersh also claims the military even undermined a U.S. effort to arm Syrian rebels in a bid to prove it was serious about helping Assad fight their common enemies. Hersh says the Joint Chiefs’ maneuvering was rooted in several concerns, including the U.S. arming of unvetted Syrian rebels with jihadist ties, a belief the administration was overly focused on confronting Assad’s ally in Moscow, and anger the White House was unwilling to challenge Turkey and Saudi Arabia over their support of extremist groups in Syria. Hersh joins us to detail his claims and respond to his critics 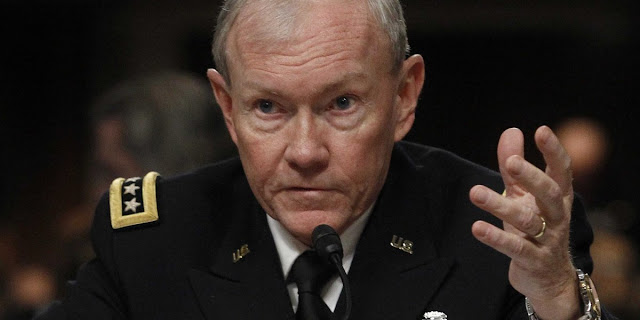 President Obama’s top military commander secretly orchestrated intelligence sharing with military leaders in Germany, Israel and Russia to thwart the president’s policy to remove Bashar Assad from power in Syria and lay the groundwork for Russia’s military entrance into the Syrian civil war, because he believed Obama’s anti-ISIS strategies were hopelessly misguided.

That is just one of the astounding takeaways from a 6,800-word expose by venerated investigative reporter Seymour M. Hersh, that was just published in the London Review of Books. Hersh, whose sources include top senior aides to the Pentagon’s Joint Chiefs of Staff, which commands all U.S. military forces, also described in great detail how Turkey’s president Recep Erdoğan has deceived the White House by siding and arming ISIS and other extremist Islamic militias in Syria, in a gambit for Turkey to emerge as a regional power akin to the Ottoman Empire.

The broad contours of this cloak-and-dagger tale were confirmed by Saturday’s Democratic Party presidential debate. One of the key foreign policy questions was whether the Syrian dictator had to be removed to defeat ISIS. Bernie Sanders said no, voicing the same argument Hersh reported was put forth by recently retired Joint Chiefs chairman Martin Dempsey: removing Assad would create a vacuum that Islamic extremists would fill. Ex-Secretary of State Hillary Clinton said Assad had to go, but intriguingly noted that Turkey was not helping matters. This separation of Assad’s fate from fighting ISIS is now moving into the presidential race, but if Hersh’s account is correct it mirrors the thinking of the top Pentagon commander who felt he had to act on his own because Obama wouldn’t listen to the military's advice.

According to Hersh, the president’s policy—that Assad must leave office, and that moderate rebels in Syria could be armed in order to defeat him—was built on major flaws. That was the conclusion Dempsey and the various intelligence teams that prepared reports for the Joint Chiefs made. There were no moderates in the Syrian civil war, as repeatedly proven by failed CIA attempts to arm and train forces that took American weapons and sold them to Assad’s fiercest opponents, either Jabhat al-Nusra or the Islamic State. Moreover, removing Assad would likely lead to a situation similar to what has been seen in Libya and Iraq, where America's removal of those dictators created a vaccum that was filled by warring factions and fundamentalists. Hersh quotes Lieutenant General Michael Flynn, director of the Defense Intelligence Agency from 2012 to '14, who said of the White House, “They did not want to hear the truth.”

So the Joint Chiefs, under Dempsey, found a way around the president. Hersh writes, “The Joint Chiefs felt that a direct challenge to Obama’s policy would have ‘had a zero chance of success.’ So in the autumn of 2013 they decided to take steps against the extremists without going through political channels, by providing US intelligence to the militaries of other nations, on the understanding that it would be passed on to the Syrian army and used against the common enemy, Jabhat al-Nusra and Islamic State.”

Those nations were Germany, Israel and Russia, which all had reasons for cooperating with Assad. “Germany feared what might happen among its own population of six million Muslims if Islamic State expanded; Israel was concerned with border security; Russia had an alliance of very long standing with Syria, and was worried by the threat to its only naval base on the Mediterranean, at Tartus.”
Hersh then quotes an unnamed senior adviser to the Joint Chiefs who described what would come to pass:

"We weren’t intent on deviating from Obama’s stated policies," the adviser said. "But sharing our assessments via the military-to-military relationships with other countries could prove productive. It was clear that Assad needed better tactical intelligence and operational advice. The JCS concluded that if those needs were met, the overall fight against Islamist terrorism would be enhanced. Obama didn’t know, but Obama doesn’t know what the JCS does in every circumstance and that’s true of all presidents." The advisor went on, "The JCS could conclude that something beneficial would arise from it—but it was a military to military thing, and not some sort of a sinister Joint Chiefs’ plot to go around Obama and support Assad. It was a lot cleverer than that. If Assad remains in power, it will not be because we did it. It’s because he was smart enough to use the intelligence and sound tactical advice we provided to others."

The Joint Chiefs started sharing these top intelligence reports under four conditions, Hersh said. First, Assad must keep Hezbollah from attacking Israel. Second, he must renew negotiations with Israel on the Golan Heights. Third, he must accept Russian and other outside military advisers. Fourth, he must commit to holding open elections after the war with a wide range of factions. Assad essentially agreed to these conditions over time and that led to major shifts in the war that are generally known to the public, Hersh wrote. First, the supposedly moderate Syrian rebels started receiving substandard arms, which they have complained about. That led Assad to stop their military gains made in the spring of 2013. And then Russians came in militarily, essentially because they had long relations with Syria and they felt the Islamic extremists were allied with Chechen rebels and other enemies. Russia’s Vladimir Putin did not want to see Assad murdered the way Gaddafi had been in Libya, Hersh wrote, which would also create a vacuum.

As all of this was unfolding, the U.S. military and its allies in this clandestine plan (Russia, Israel and Germany) increasingly saw Turkish president Erdoğan as double-dealing. Erdoğan told the Obama White House he was cooperating in the fight against the Islamic State while in reality he was helping to arm them and was allowing Islamic fighters from other countries, notably western China, to pass through Turkey to get into Syria. The Joint Chief’s anonymous adviser said the top military officers felt the U.S. and Russia had many more common interests than differences.

“When it comes to tackling Islamic State, Russia and the US have much to offer each other,” Hersh wrote. "Many in the IS leadership and rank and file fought for more than a decade against Russia in the two Chechen wars that began in 1994, and the Putin government is heavily invested in combating Islamist terrorism. ‘Russia knows the Isis leadership,’ the JCS adviser said, ‘and has insights into its operational techniques, and has much intelligence to share.’ In return, he said, ‘we’ve got excellent trainers with years of experience in training foreign fighters—experience that Russia does not have.’ The adviser would not discuss what American intelligence is also believed to have: an ability to obtain targeting data, often by paying huge sums of cash, from sources within rebel militias.”

Publically, the Obama administration has kept up its condemnation of Russia for supporting Assad. Hersh doesn’t suggest why, but it could be tied to the fact that the harshest criticism of Obama’s Syrian policy has come from critics who remind anyone listening that the president drew a line in the sand on Assad’s use of chemical weapons and then retreated. For whatever reason, Hersh is able to find numerous top U.S. and foreign diplomats who say Obama’s policy vis-à-vis Russia is “unfocused.” Quoting a top American diplomat recently in Moscow, Hersh writes, “The reality is that Putin does not want to see the chaos in Syria spread to Jordan or Lebanon, as it has to Iraq, and he does not want to see Syria end up in the hands of ISIS. The most counterproductive thing Obama has done, and it has hurt our efforts to end the fighting a lot, was to say: ‘Assad must go as a premise for negotiation.’”

The thrust of Hersh’s article is that unbeknown to President Obama, his former Joint Chiefs chairman orchestrated the way for Assad to remain in power while paving the way for Russia to enter the Syrian war—despite stated White House policies and criticisms of both Assad and Putin. That White House drum beat, which to Hersh sounds like a Cold War script, continues. “The four core elements of Obama’s Syria policy remain intact today: an insistence that Assad must go; that no anti-IS coalition with Russia is possible; that Turkey is a steadfast ally in the war against terrorism; and that there really are significant moderate opposition forces for the US to support.”

Hersh writes that this incredible powerplay behind Obama’s back ended with Dempsey’s retirement this September. His replacement, General Joseph Dunford, told the Senate Armed Sevices Committee this past summer that Russia poses an “existential threat” to the U.S., and since assuming office said that the U.S. must “work with Turkish partners to secure the northern border of Syria” and “do all we can to enable vetted Syrian opposition forces”—which according to Hersh are the nonexistent moderates.

“Obama now has a more compliant Pentagon,” Hersh writes. “There will be no more indirect challenges from the military leadership to his policy of disdain for Assad and support for Erdoğan. Dempsey and his associates remain mystified by Obama’s continued public defense of Erdoğan, given the American intelligence community’s strong case against him—and the evidence that Obama, in private, accepts that case."

Hersh writes that last spring, Obama said to Turkey’s intelligence chief, “we know what you’re doing with the radicals in Syria.” Ending on that note, Hersh leaves readers of this astounding cloak-and-dagger tale wondering what has really been going on. Did Obama’s top generals outfox him when it came to the war in Syria? Do the top U.S. military commanders really believe that the White House has chosen the wrong sides and allies in Syria and needs to wake up to the fact that the U.S., Russia and China all share common goals fighting Islamic extremists? Did the generals have such little confidence in Obama that they took it upon themselves to launch a covert foreign policy that has apparently succeeded? Assad is still in power and the 2016 political debate is beginning to sever the question of his removal and countering ISIS.

If Hersh’s account is to be believed, the answers are yes, yes and yes.


Steven Rosenfeld covers national political issues for AlterNet, including America's retirement crisis, democracy and voting rights, and campaigns and elections. He is the author of "Count My Vote: A Citizen's Guide to Voting" (AlterNet Books, 2008).

Militaryto Military
Seymour M. Hersh on US intelligence sharing in the Syrian war