Turkish officers on the Syrian border have communicated with Islamic State militants in Iraq and Syria, Turkey's Cumhuriyet daily reported, citing an investigation by the Ankara Chief Prosecutor's office which allegedly eavesdropped on their phone calls.

The wiretapping reportedly took place last year as part of an investigation into six missing Turkish citizens, the Cumhuriyet reported. The relatives of those missing believed they might have joined the ranks of Islamic State (IS, formerly ISIS/ISIL) militants.

An investigation was launched into as many as 27 suspects, some of them in Syria, the report revealed.

The Chief Prosecutor's office reportedly received permission to wiretap the phones of 19 people who were thought to have put the six missing persons in touch with Islamic State. The investigation reportedly revealed that those who wanted to join IS ranks received some form of “ideological training.”

“Those [who joined ISIS] from Ankara often used [the] Elbeyli district [of Kilis] as a throughway by traveling via Gaziantep and Kilis to the village of Able, which is subordinated to Syria's Al-Bab district,” the report said, as cited by newspaper Today’s Zaman.

A note written in one of the transcripts for the wiretappings allegedly states that the person designated in the transcript as “X2” is considered to be a member of the military, the Cumhuriyet reported.

One of the conversations is said to be as follows:

--Yes, brother.
X2: We are on the mined land where I delivered the vehicle. We have put our lights on. [We have the] material on us; come here with your men from that side…

Ankara has recently faced a number of accusations alleging it has bought oil from IS and let terrorists freely pass through Turkey's border with Syria. A newly-leaked report on illegal oil sales by Islamic State, compiled at the request of Norway, revealed that most of the IS-smuggled oil has been destined for Turkey, where it is sold off at bargain low prices.

In early December, the Russian Defense Ministry also released evidence which it said shows most of the illegal oil trade by IS goes to Turkey. Ankara has denied the пallegations.

Iraqi MP and former national security adviser, Mowaffak al Rubaie, told RT on Tuesday there is “mounting evidence” from all over the world, including Iraq, that “Turkey is playing not a very clean game,” when it comes to Islamic State.

“Turkish authorities need to do a lot more than what they are doing now to come clean from the accusations that they are siding [with], or at least that they are turning a blind eye to, the movement of these terrorists from Turkey to Syria and Iraq and vice versa,” the MP said.

Top Turkish 'traitors' according to Erdogan and Davutoglu

What does it take to be accused of “treason” in Turkey? Exposing the ruling circle's ties with terrorists and voicing opposition to the downing of a Russian plane is a start, but who are the people getting under the skin of President Erdogan and Prime Minister Davutoglu?

A Turkish legal firm has filed a criminal complaint against the country’s law enforcement and intelligence agencies. That’s after the German broadcaster, ARD, aired a documentary, alleging that Daesh is conducting a slave trade via an office in Turkey. It involves women and children from the Yazidi Kurdish minority who were kidnapped in Syria. 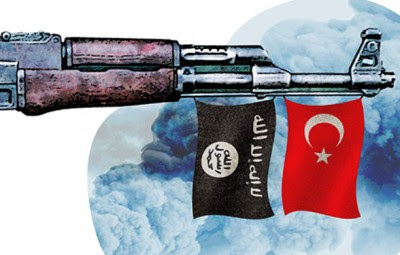 A commander of the Iraqi volunteer forces (Hashd al-Shaabi) revealed that a mobile phone found with one of the killed ISIL ringleaders proved the Turkish spy agency’s support for the terrorist group.

“The mobile phone was found with one of the killed ISIL leaders in the Northern parts of Salahuddin province two days ago,” Jabbar al-Ma’mouri told Soumeriya news on Monday.

He said that the mobile set and history files contain messages from the Turkish intelligence agency which show that Ankara supports the ISIL terrorist group through providing security at the points of entry used by ISIL militants from Turkey to Iraq.

“The mobile phone also contains other important information which cannot be disclosed now, and it has been delivered to the specialized security groups for further scrutiny,” Ma’mouri said.

In relevant remarks on November, Russian Ambassador to France Alexander Orlov said that Turkey has played an “ambiguous” role in the campaign against the Islamic State of Iraq and the Levant (ISIL) while acting as an accomplice to the terrorist group’s activities.

Also last month, former US Department of State senior advisor David Phillips said Turkey has blatantly provided material support to the ISIL because they share an ideological connection along with a common foe in Syrian President Bashar Assad.

“Turkey’s role has not been ambiguous — it has overtly supported the ISIL,” Phillips, currently Director of Columbia University’s Peace-building and Rights Program, said. “It has provided logistical support, money, weapons, transport and healthcare to wounded warriors.”

Phillips explained that Turkey has been supporting the ISIL to remove Syrian President Bashar Assad from power and because of a “spiritual bond” that exists between Turkey’s governing party and the jihadists.


WHY ‘TURKEY CAN EASILY BECOME A NEW SYRIA’

100 Kurdish women and children were killed in southeastern Turkey over the past six months, said the Human Rights Watch and added that the number is not exact. The victims died during government special operations and armed clashes. Tensions between Turkish authorities and Kurdish opposition escalated in July after the latter broke a ceasefire agreement and accused Ankara of supporting Daesh (Islamic State). After, HRW called on the Turkish government to suspend military operations and launch a full-scale investigation.

Kani Xulam, Kurdish activist and director at the American Kurdish information network spoke to Sputnik in an exclusive interview saying that Ankara would never do that.

He spoke about how the Turkish government is waging cultural genocide on Kurds.

“Curfews have been imposed in the number of cities and people cannot step outside. There is bombing going on and if people are injured they cannot get to the hospital. Electricity and water have been cut off. It is an undeclared war that Turkey is waging on its Kurdish civilian people in cities throughout south and east of the country,” Xulam told Sputnik in an interview.

He further said, “There are 20 million people living in the country with no basic human rights, no political rights and are forced to assimilate Turkish culture, language and literature. The Kurds are saying that they have had enough and they want local autonomy.”

The activist called this a cultural genocide and ethnic cleansing in a sense that people are not allowed to express themselves. He said that this is against the international law and against any norms. “Turkey is denying the very existence of the Kurds in its constitution and is forcing them to be assiхmilated.”

“The fury is that what is happening in Syria can easily be duplicated in Turkey. The fault lines are exactly the same in Turkey where the Sunni majority wants to impose on Kurds and Alawites. Turkey could become easily like Syria,” Xulam said.

He further noted that, “Turks will never investigate their own abuses. They never had, they never will. It could end up in a civil war.”

Talking about whether there are independent observers and international journalists who could highlight the situation of the Kurdish people, Xulam said,

“There was a journalist to document this from the Netherlands, but as soon as these hostilities by Turkish government began they made the journalist persona non grata, bought her a ticket and sent her home. As far as I know there are no independent observers here.”

The activist said that Turkish journalists try the best they can to report on these clashes but they are imprisoned if they report against the Turkish government.
Posted by seemorerocks at 11:44