Massive flooding in the UK 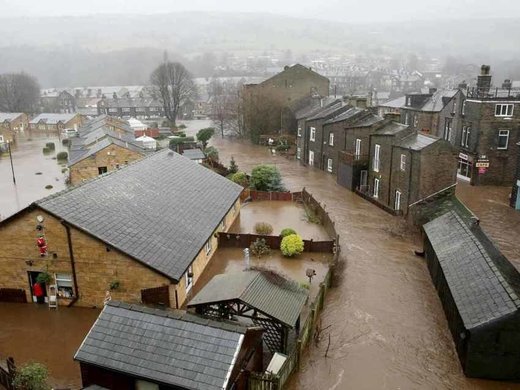 
As many as 2,000 homes in danger of being flooded tonight after nearly a month's rain falls in 24 hours

Emergency services are being stretched to breaking point overnight after "unprecedented" rainfall caused severe flooding in parts of England, Scotland and Wales, forcing thousands of people to be evacuated from their homes.

As many as 2,000 homes are in danger of being flooded tonight, and thousands of people are spending the night in temporary accommodation after nearly a month's rain fell in 24 hours.

The Prime Minister will chair a meeting of the Government's emergency Cobra committee this morning. Mr Cameron said he would take charge of the response to "ensure everything is being done to help".

The Environment Secretary, Liz Truss, said: "Our priority throughout this period continues to be protecting lives, protecting homes and protecting businesses."
She paid tribute to emergency staff working over Christmas and attempted to assure people affected that the Government was "doing everything it could to help communities to recover".

The Environment Agency (EA) advised residents in Yorkshire to prepare for further flooding today. Communities in Calderdale, Airedale, from Skipton to Leeds, and North Yorkshire including York, Pateley Bridge and Catterick are at risk.

"The rain has fallen on areas where the ground is already saturated and river levels are very high," an EA spokeswoman said. "Rain continues to fall over the Northern Pennines, with rivers responding accordingly."

Flooding extended to parts of central Leeds and Manchester, as well as neighbouring towns including Rochdale and Wigan. At least 10,000 Rochdale homes are without power after severe flooding hit the town's main electricity supply substation, which supplies 30,000 houses. Engineers managed to switch power to 10,000 properties following an early warning and a further 10,000 were connected later. The power company said extra engineers were being drafted in to reconnect the final 10,000 blacked-out homes.

Lancashire Fire and Rescue Service warned people to stay away from affected areas. A battalion of the Duke of Lancaster's Regiment was added to troops drafted in following the emergency Cobra meeting on Christmas Day. The soldiers helped communities across the North-west build miles of temporary flood defences.

In Wales, traffic chaos followed when flooding closed the A55 and A5 roads, with people needing to be rescued from cars. The A5 was closed near Betws-y-Coed and the A55 at Llanfairfechan. Both roads were expected to remain closed for 24 hours.

A spokesman said it had received reports of floating cars and that some people had to be rescued, adding: "It's chaos at the moment."

Several traditional Boxing Day sporting fixtures, including football and racing, were called off because of flooding. It was also revealed that 85 per cent of the country's flood defences had already been deployed in Cumbria and what remained had to be spread thinly over a wider area stretching from the Scottish border to Yorkshire. In Cumbria, where rainfall has smashed records, residents were bracing for more rain as Met Office experts said the weather band would continue to move northwards.

The shadow Environment Secretary, Kerry McCarthy, said it was "increasingly clear that so-called 'unprecedented' weather events are here to stay". She added: "The Government must drop its complacency over the need for climate change adaptation. It must also invest in maintaining flood defences, rather than cutting them as they had planned, as well as look urgently at what else can be done to reduce flood risk in future."

The Liberal Democrat leader, Tim Farron, also called for a rethink. He said: "Coming a single day after Christmas is utterly terrible for those communities. The Government can and must do more to help. But part of that response must be to look again at swingeing cuts to departments like DCLG [Communities and Local Government] and Defra [Environment, Food and Rural Affairs] that will be needed to help communities back on to their feet."

An emergency review of the Government's ability to cope with flooding will now begin as soon as Parliament resumes on 5 January.

The Government is preparing for the worst - and expects the current "weather bomb" to last into January. It will come under mounting pressure over its 2010 decision to cut flood-defence spending.

Ministers have rushed out an announcement for emergency funding for Cumbria and Lancashire to repair roads and rail networks damaged by the floods. The Transport Secretary, Patrick McLoughlin, said the Government would provide £40m of emergency funding to help communities recover


UK flooding: 200-year-old pub on bridge collapses as River Irwell floods
Lancashire, North and West Yorkshire have all been declared at 'severe' risk of flooding as Storm Eva hits the UK 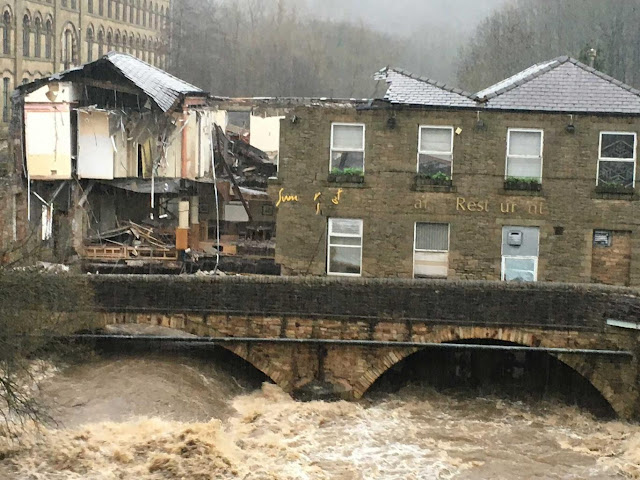 A 200-year-old former pub in Greater Manchester has collapsed due to the flooding on the River Irwell.

The building, in Summerseat near Bury, was The Waterside pub and restaurant atop a bridge crossing the massively swollen river as torrential rain caused flooding across the country.

Locals are now concerned the bridge may not hold

Householders have spoken of their devastation at returning to damaged properties to discover priceless family heirlooms missing. One said victims felt like they had been 'kicked when they were down' by the 'unbelievably cruel' raids across Yorkshire.

Police said it was 'impossible to comprehend' why the heartless opportunists would want to bring further suffering to those already hit by the crisis. Officers stepped up patrols last night amid fears that looters in white vans were targeting flooded houses.