The Irish Coast Guard was involved in a rescue mission in treacherous conditions 120 miles off Mizen Head when a fisherman was injured on board a trawler during severe weather conditions.

"Following a request from the UK Coast Guard, the Irish Coast Guard through its coordination centre at Valentia has coordinated the airlift of a Spanish national crew member from the UK registered Fishing Vessel Brisan 120nm SSW off Mizen Head," a spokesman for the Coastguard said.

"The winch was executed in extremely challenging weather conditions with wave height at 8 metres and  force 6 westerly winds," the spokesman explained. 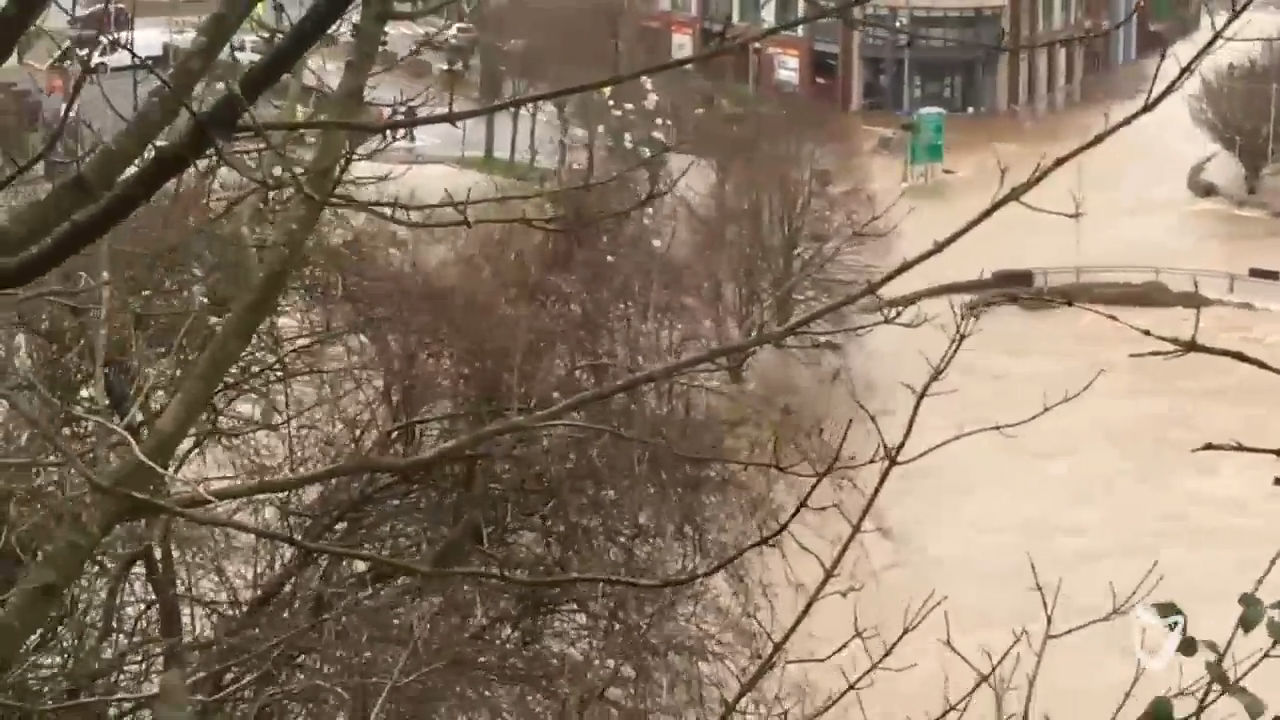 Elsewhere, a man and four children had to be rescued from a car after it got swamped by rising flood waters in Co Wicklow as catatastrophic flooding is being reported around the country due to Storm Frank.

Shortly after 11am at the Meeting of the Waters near Avoca the converging waters from the Avonmore, Avonbeg and Avoca Rivers rose high enough to burst the banks and flood the road.

“One car got stuck and the water rose up to the windows so we were contacted to get them out safely,” a fire brigade spokesman said.

“A fire tender and ambulance from Arklow were sent to the scene and all five were taken to safety from the car without any reports of injuries,” he added.

In Wexford, one of the South East's main arteries remains under three foot of raging flood water this morning after the river Slaney burst its banks.
A father and five children were rescued from a car in Arklow by fire services after becoming trapped. 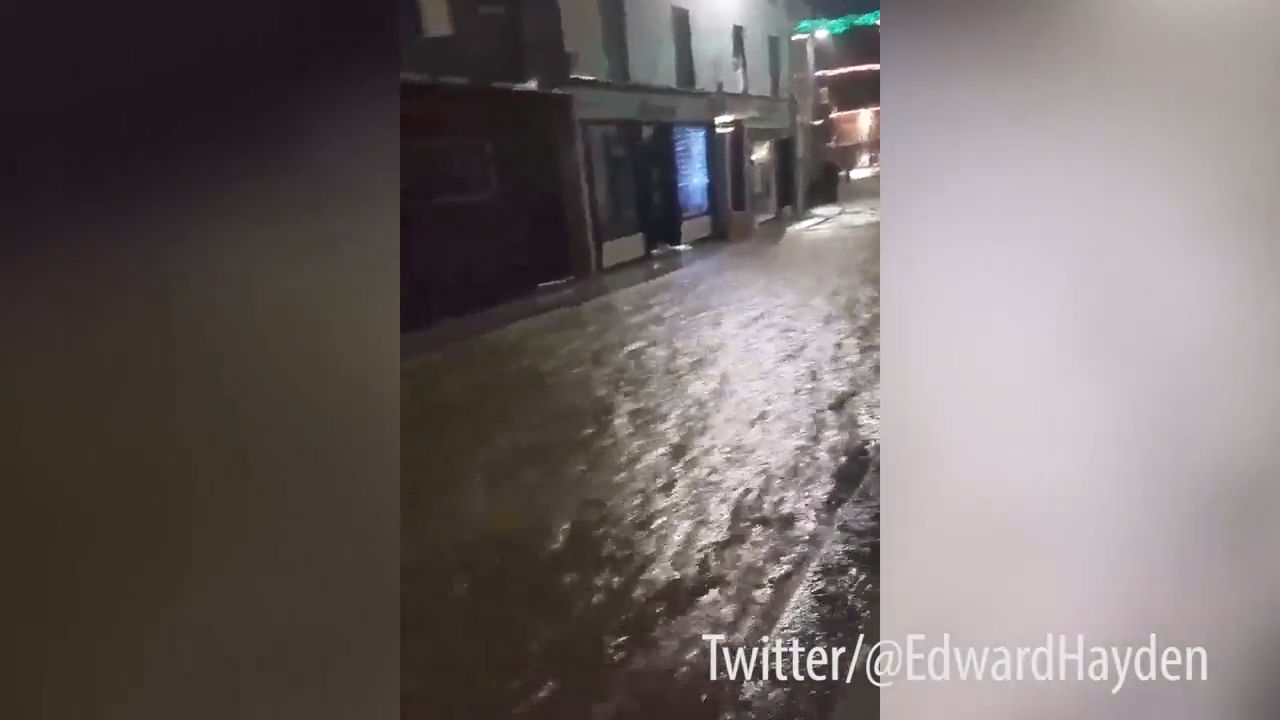 The family were taken into a local business premises to recuperate.

The N11 in Enniscorthy, Co Wexford in currently impassable with emergency services bracing themselves for another deluge of rising waters after high tide.
A number of people were rescued from their homes along the banks of the fast flowing waters this morning.

Up to 12 ground floor apartments at Templeshannon Quay and the Promenade were evacuated shortly after 8am with some residents taken from their properties in boats.

It understood that it is the worst flooding the town has experienced since 2002. 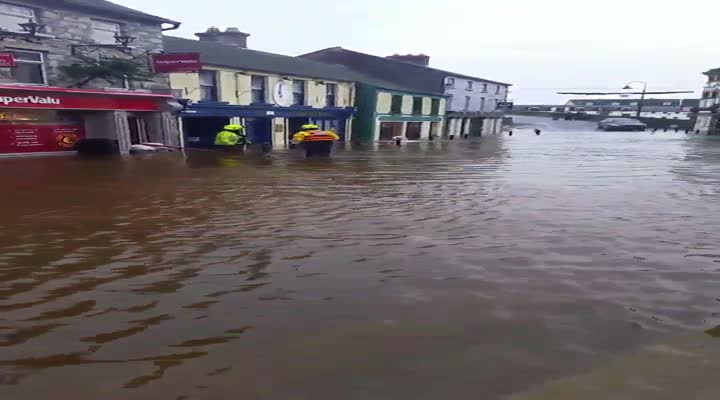 Earlier this morning at least a dozen homes had to be evacuated and two women with children had to be rescued from cars after Storm Frank caused flash floods in east Cork.

The Defence Forces were mobilised in Midleton after torrential rainfall caused streams and rivers to break their banks.

West Cork pub owner, Donal Crowley, was trying to maintain a brave face as he surveyed the worst flood to hit Bandon since the disastrous deluge of 2009.

"This is even worse than December 5," he said as he surveyed the wreckage inside his premises, Brady's on North Main Street.

READ MORE: 'It's a disaster, we never dreamed that it'd be this bad' - family whose pub destroyed by Storm Frank floods 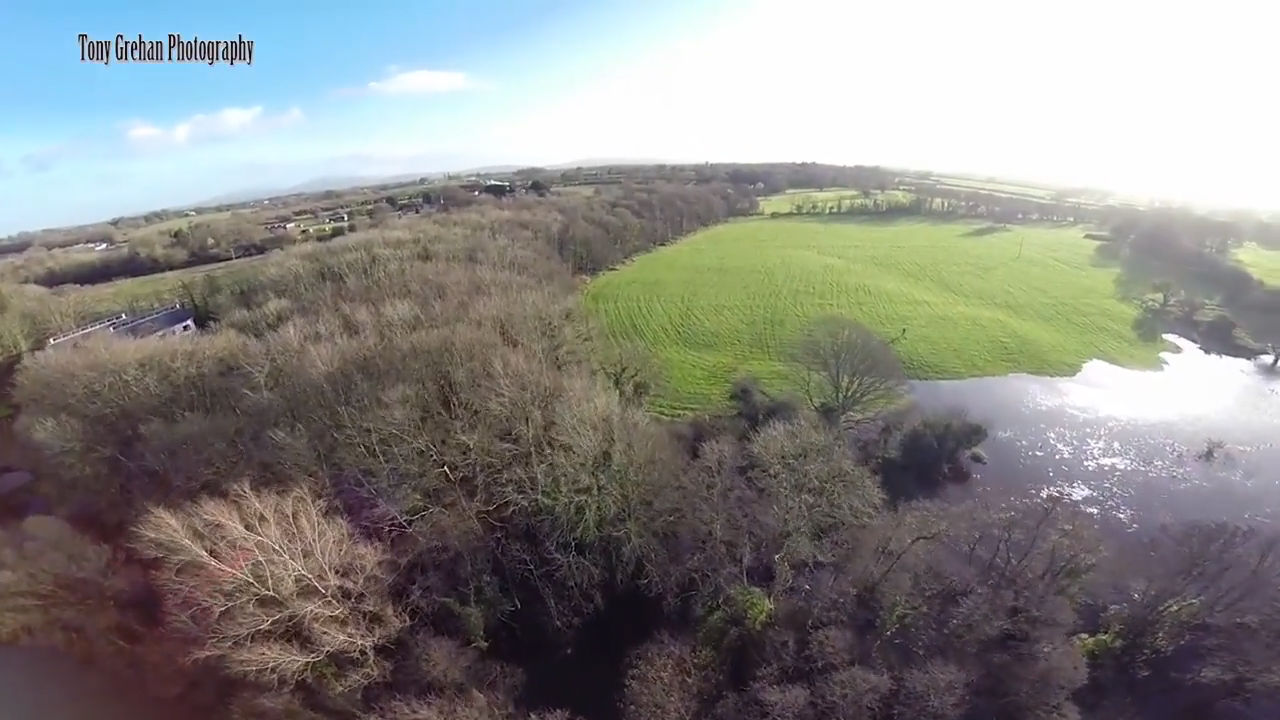 The army teams worked with Cork Co Council staff and Midleton Fire Brigade on emergency pumping operations as multiple local roads were closed.
A woman and her two children were rescued after their vehicle became stranded between two floods in Midleton.

In Glanmire, a woman and a young child were similarly taken from her stranded car which was trapped by flood waters.

A dozen local homes, in a low-lying Midleton estate, were also evacuated as flood waters rose in a matter of minutes given the torrential rainfall.

Meanwhile, the west Cork town of Bandon was reeling from its second disastrous flood in the space of three weeks.

Desperate efforts are underway to protect businesses and homes as the Rivers Bandon and Bridewell broke their banks.

This will result in the closure of Kent Bridge as a preventative measure.

Torrential overnight rainfall from Storm Frank resulted in flooding in the town centre with up to 20 properties impacted so far with the river level still rising.

Hotelier Don O’Sullivan described the second flood in the space of three weeks as “absolute disaster for the town”.

Gillian Powell, a businesswoman in Bandon, has described how the community is struggling to keep the flood waters at bay.

"We're just keeping it at bay at the moment," she told Morning Ireland on RTE Radio One.

"It is certainly very threatening and we're glad that high tide is now passing. That will definitely help things.

"The next two hours are going to be really hard but at least we have daylight now and we can do the battle in the daylight hours.

"A team of neighbours and friends have come in, we lifted everything in the house and the school and traders in the town... we've been lifting their stock.

"It's really a quick rising flood and we hope it goes down quick.

"This is our third time in a month and I would also like to say that a lot of the traders that were promised compensation and had applied for it, did not get it before Christmas as promised.

A spokesman for Cork County Council told Independent.ie that the Severe Weather Assessment Team met at 3am, 6am and 9am to discuss the critical flooding in the area.

They have received several reports that the village of Togher is now completely flooded.

The recent flooding in Galway has lead to the establishment of a 'Temporary Community Welfare Service' in Gort.

Under the direction of the Department of Social Protection, a clinic will operate in the town centre from tomorrow, December 31 until January 4.

The service will be open from 10:30am - 12:30pm and will be situated in the Community Centre in the town.

Staff will be on hand to offer advice and assist with the completion of applications under the Humanitarian Assistance Scheme.

A special telephone line has been set up in the Intreo Centre in Loughrea, Galway, and is contactable on 091-536773.

People who are seeking assistance under the newly established scheme can also call into the Intreo Centre in Loughrea for further information.

Elsewhere in the country, the flooding is reported to be severe. Graiguenamanagh Co Kilkenny has been particularly badly hit.

Sean Keane, a resident of Graignamanagh, Co. Kilkenny, described the scenes in the town after the River Barrow burst its banks in dramatic circumstances last night.

"It's like a war zone, the water has destroyed a lot of businesses. Murray's pub is full of water, Doran's Supervalu is gone... the town is impassable. It's utter devastation here," he told Morning Ireland on RTE Radio One.

"Graignamanagh is at a standstill. I remember 22 years ago it was really bad but this is the highest ever and it's going to get worse. The River Barrow is going to get higher.

"They're going around here in wet-suits."

Another local resident Michael Keating told Independent.ie that the Graiguenamanagh main street is "under three to four feet of water".

Mr Keating said that boats, which were docked on the river, are now sinking, due to the excess water. The main street is now reported to be impassable.
The area last flooded in 2008 but Mr Keating said it was nothing compared to the devastated which faces locals now.

"All the businesses in the main street are completely underwater. People are out trying to save their shops and businesses now."

In Roscommon last night local divers had to intervene after a car was blown into the River Shannon.

It is understood the car’s handbrake was not engaged and a gust of wind forced the car into the river.

Members of the Lough Rea sub-aqua club assisted the emergency services to secure the car.

Club chairman Michael Farrell said a rescue team will attempt to remove the car once the winds ease.

“We located the car underwater and secured it by tying it to the pier,” Mr Farrell told the Irish Independent last night.

“We didn’t want it to hit or damage a ship,” he added.

Around 12,000 homes are without power this morning as Storm Frank continues to wreak havoc across the country.

The worst affected areas are Fermoy and Bandon in Cork and Celbridge in Co Kildare where 4,600 homes and businesses are without power.

There are faults throughout the country and 600 homes in Northern Ireland also have no electricity.

The ESB has just confirmed that it needs to massively increase water discharges from Inniscarra Dam in a bid to relieve water pressure in the River Lee valley.

Read more: ESB Networks say the 13,000 homes currently without will be reconnected by tonight

Met Eireann has reported that this afternoon will bring heavy showers mostly in the west and northwest.

It will be thundery in places and possibly wintry on higher ground. Showers will become isolated later with some bright or sunny spells developing.

Afternoon temperatures will reach the highest peak of 8 degrees.

This morning's strong and gusty southerly winds will veer westerly and will become light to moderate this afternoon and evening.

Read more: Temperatures set to plunge to sub zero in aftermath of Storm Frank
"There will be a short period of a couple of hours of severe winds this morning,"

Joan Blackburn of Met Eireann told independent.ie. "The heavy rain is clearing largely but there will be heavy thunderstorms in the west and north-west this morning."

Tonight, it will be cold and temperatures will drop to as low as 0 degrees with some icy patches.

But further south, cloud and winds will increase with rain developing and pushing northwards through the night (falling as sleet or snow in parts of Ulster towards dawn).

Meanwhile, residents in the Shannon region, the south and southwest are on full alert as water continues to rise near homes and businesses.

Up to 70 mm of rainfall is expected to fall along the River Shannon catchment during Storm Frank.

The most severe part of the weather front is likely to cross the country between 6am and 11am this morning.

There has been widespread spot flooding nationwide causing havoc on roads.
AA Roadwatch has advised motorists to exercise caution.