Yesterday the Guardian reported Russia's airstrikes on Syria appear futilewith little progress on ground, and then today we have an Amnesty report saying the Russians are hitting civilians on the ground inlarge number.

Someone is not telling the truth and I'm sure I know who.

Just have a look at reports from on the ground and you will see that there are great advances in Syria by the Syrian Arab Army and Hezbollah, all with support from Russia's airstrikes.

As for the second allegation it is inevitable that there will be casualties but read and watch below to see the degree of falsification on. The western allies are either hitting sand or can hardly fail to hit hospitals or other civilian infrastructure when they are not hitting Syrian army positions "by mistake"

The human rights watchdog’s latest report exposing “Russia’s shameful failure to acknowledge civilian killings” is focused on six attacks in Homs, Idlib and Aleppo provinces, which the NGO pinned on “suspected Russian airstrikes.” Amnesty researched the attacks “remotely”, going as far as to accuse Russia of war crimes by causing“massive destruction” of residential areas through the alleged use of internationally prohibited cluster munitions.

“The Secretary General notes with concern Amnesty International report on alleged violations of international humanitarian law resulting of the Russian airstrikes in Syria. The UN cannot independently confirm the cases presented in the report,”Deputy Spokesman for the Secretary-General, Farhan Haq said.


Based on witness accounts gathered via phone interviews, information from local human rights defenders and after reviewing videos and pictures posted online, Amnesty came to the conclusion that at least 200 civilians had been killed in at least 25 Russian airstrikes since the air campaign began.

The Russian defense ministry dismissed the report for its failure to provide any concrete evidence or new factual information whatsoever, besides groundless assumptions and accusations.

“Once again, nothing concrete or new was published, only the same cliches and fakes that we have already debunked repeatedly,” Russian defense ministry spokesman, General-Major Igor Konashenkov, said after reviewing the report.

Минобороны РоссииVerified account‏@mod_russia
#SYRIA Temptations to accuse the Russian air group of mass killing of civilians and use of prohibited munitions are continued
7:34 AM - 24 Dec 2015
“The report constantly uses expressions such as ‘supposedly Russian strikes,’ ‘possible violations of international law’ – a lot of assumptions without any evidence,” he noted.

Furthermore Moscow doubts the authenticity of the aerial photos used by Amnesty International and called upon the NGO to at least name the sources of the information it had used in the report.

Минобороны РоссииVerified account‏@mod_russia
#FAKEAI Amnesty International, reveal who and when provided you with this so-called data or it will be done by the Rus MoD itself
7:44 AM - 24 Dec 2015

“The barrage of lies was aimed at accusing Russian forces of bombing Syrian hospitals. We immediately rejected these claims, presenting comprehensive photographic and video evidence to the public. A characteristic feature of all these allegations is the lack of concrete evidence and references to anonymous witnesses,” Konashenkov told reporters.

“As for cluster munitions allegations. Russian aviation are not using them,” the general-major added. He reminded that dozens of international journalists who visited Russia’s Kheimim base in Latakia filmed the jets preparing for sorties but“have never presented footage or asked questions about them because there are no such weapons at our base.” 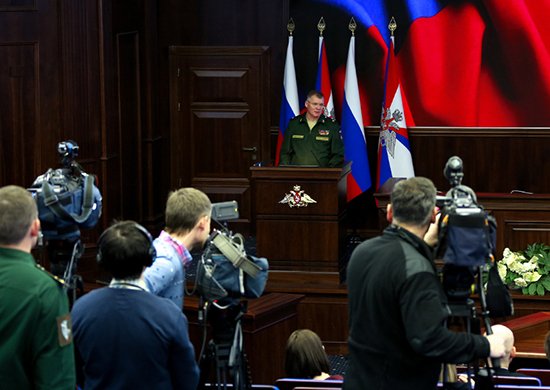 The general in turn accused the NGO of not covering jihadist atrocities in Iraq and Syria or illegal activities of the Saudi-led coalition in Yemen. Konashenkov told reporters that Amnesty also failed to investigate the use of cluster munitions by Kiev’s troops in eastern Ukraine.

Минобороны РоссииVerified account‏@mod_russia
#SYRIA Representatives of respectful mass media, do not put at risk your reputation by publishing fakes provided by anonymous sources
7:44 AM - 24 Dec 2015

“We have a question for Amnesty International: why did this organization keep silent and turn a blind eye to material, undeniable, real evidence of the use of cluster munitions by the Ukrainian Armed Forces against cities in eastern Ukraine?”

The general-major concluded that such fake reports are manufactured to distract the international community from the four-year civil war in Syria and to divert public attention from real concerns on the ground.

There are indeed some “serious defects” in the credibility of Amnesty’s report, security analyst and former counter-terrorism intelligence officer Charles Shoebridge told RT, suggesting that was rather an emotional call to avoid civilian casualties, than an independent and impartial investigation.

“Of course nobody would say that it is not difficult in Syria’s circumstances to carry out such an [impartial] investigation, particularly since these areas, the targets of Russia’s attacks are of course under the control of rebel and in many cases extremist Islamist groups, which of course very much restricts what local members of the public are allowed to say,”Shoebridge explained.

Shoebridge insists that “some degree of civilian casualties” is almost inevitable from any aerial campaign even with the most precise weapons, but says that even people witnessing the attacks on the ground can’t point to the perpetrator with any degree of certainty.

“People on the ground, particularly doctors that have been interviewed or working inside hospitals dealing with injuries they of course can say these are blast injuries, shrapnel injuries, but they themselves cannot say with any certainty in most respects… It is certainly the case that I think people on the ground will have great difficulty to differentiate in between not only blast that was caused by perhaps the artillery or rocket, or even explosions from car bombs in some cases, but particularly who it is that is dropping bombs on them,” Shoebridge said.

Besides the questionable effectiveness of the “remote investigation technique”, Amnesty’s own credibility and impartiality should be looked at, Shoebridge dded.

“It is important to look at the nature of Amnesty itself in terms of the credibility of its reporting. For a large part of this Syria conflict Amnesty, particularly here in its London office, has made no secret of its support for large part of Syria’s rebellion, even at some point a couple of years ago calling – which many people would find bizarre for human rights group – for the arming of Syria’s rebels, even though at the time Syrian rebels were known to be carrying out human rights abuses themselves of very serious nature.”