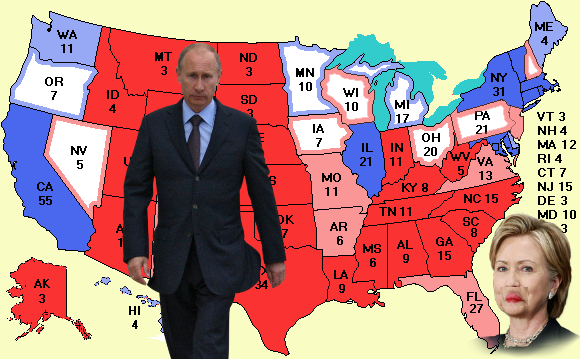 According to a report at Russia Insider, something we thought would be nigh impossible has just happened – Vladimir Putin’s approval rating in Russia has soared to yet another all time high:

According to WCIOM, ‘such high rating of approval of the Russian president is registered, first of all, in connection with events in Syria, Russian aviation’s airstrikes at terrorist positions.’ Sociologists reminded that the Russian president’s rating has remained higher than 80% for the last two years. ‘Putin’s rating started growing in spring 2014 against the backdrop of Russia’s reunification with Crimea and Sevastopol. In March 2014, the rating stood at 76.2% on average, in April — at 82.2%, and in May — at 86.2%,’ WCIOM said.

Putin adorned in his presidential ray-bans. He’s never been more popular in Russia

We have put together a chart of Putin’s approval rating history by using the most recent chart available from the Levada Center (another Russian polling company) and complementing it with the result of the recent WCIOM survey (unfortunately we couldn’t find a chart of the WCIOM poll’s history, but various news reports that on Putin’s rating that have appeared over time suggest that the two polls are tracking each other very closely, so this amalgamated chart should serve):

The Levada Center’s Putin approval rating survey, with the latest WCIOM survey result added at the end – click to enlarge.

In short, all those who don’t like Putin or were hoping for some sort of regime change in Russia continue to be out of luck.

Mainstream Media, Here and There

One reason why we are even posting about this is that the Western press has also reported on the event, employing a somewhat less neutral tone of voice. For instance, the Washington Times writes: “Putin’s approval rating hits new high as Russia’s state media sells Syria campaign”


“From triumphant reports about the “liquidation” of “terrorist training camps” to Kremlin-friendly analysts praising Moscow’s growing international influence, the official media’s coverage of Russia’s dramatic entry into Syria’s more than 4-year-old civil war has been decidedly upbeat — and one more reminder of the Kremlin’s ability to dictate the terms of popular debate.”


Given that terrorist camps are apparently indeed liquidated by Russian air strikes, the Russian state media are not entirely wrong in this case. As Zerohedge recently reported, in a quite stunning recent development, even Iraq and Jordan are now cooperating with Russia and asking it to help them with subduing IS. They must have been impressed by something the Russians have done (very likely they are actually giving IS discernible problems).

However, what makes the above sour grapes style reporting (no doubt echoed elsewhere in the Western media) especially funny is that while it is true that the Kremlin exerts extraordinary influence on the media in Russia, one wonders in what way their reportage on Syria is different from the reporting in the happily self-censoring US mainstream media on the Iraq war, especially in the run-up to said war.

We seem to recall that there was unquestioning support of the administration’s quest to sell a war that wastransparently based on little but lies. Anyone with an IQ above room temperature could simply not help realizing that the public was misled. The “free press” was happy to supply truly cheap propaganda in generous gobs (regardless of its presumed political leanings; e.g. the pro-socialist NYT was among the newpapers arguing most forcefully in favor of war and reported even the most ridiculous administration talking points as if they were gospel).

This was as blindingly obvious as the propaganda dished up by the Pravda in Soviet times. In fact, the handful of people who dared to ask questions when there was still time to potentially reconsider the administration’s course received almost Stalinesque treatment (this continues to this day, only now the people getting the “treatment” are those who dare to question US policy vs. Russia).

So this is clearly a case of the pot calling the kettle black. Who cares if the media are state-owned or if they are owned by a tiny corporate oligarchy that is in cahoots with the State? The result is exactly the same. This is not to say that Kremlin control over the Russian media deserves approval – far from it. When Putin kicked out the Yeltsin era oligarchs who basically ordered the latter’s government around as they pleased, he inter alia got rid of two media moguls.

One of these, namely Boris Berezovsky, was probably the most powerful man in Russia during the Yeltsin era.

Evidently Putin quickly realized that exerting control over the media would be to his advantage, and so his government started to suppress dissenting voices while giving pro-government propaganda a great deal of room, especially on TV.However, on average the citizens of Russia aren’t any less perceptive than the citizens of other nations. Roughly 107 million Russians are e.g. using social media, so we can assume that Russians are in general fairly internet-savvy.

Similar to how this works in the US, it is very easy for the Russian government to whip up nationalist fervor when it is conducting a military intervention abroad. Those questioning the wisdom of interventions will naturally be few and far between, but we are sure they know where to get their information, regardless of what is broadcast on TV.

In an ironic twist, the places in the developed world where the population nowadays looks askance at any type of military engagement from the very outset are Germany and Japan – regardless of the rationalizations offered in its favor.

Another aspect worth considering is that Putin’s consistently high approval rating is beginning to align with the trend of the Russian stock market – at least in ruble terms. Readers may recall that we once pointed out that president Bush’s sharply declining approval rating during his second term was one of several warning signs for the stock market at the time, as it indicated that the underlying social mood in the US was increasingly diverging negatively from stock prices.

The MICEX Index, daily – surprisingly, it has maintained its recent uptrend in spite of oil prices weakening again and the ruble strengthening somewhat (on Tuesday the ruble has sold off sharply, but it remains quite a bit above its August low).

Since the Russian stock market has given back about half of the gain it achieved earlier this year in dollar terms due to the weaker ruble (it rose by more than 40% in the space of five months in the first half), this is something one should keep an eye on, as opportunity probably continues to beckon. Eventually a more positive social mood should also be reflected in a stronger or at least stable currency.

We realize of course that Russia’s economic fundamentals are quite weak at present, but they are not as weak as might have been expected in view of the decline in the oil price. Moreover, the currency’s value is primarily a matter of monetary inflation, yields and inflation expectations, and from these perspectives the ruble actually doesn’t look unattractive, ceteris paribus.

Obviously, the oil price still represents a wild card at this juncture – its recent weakness has at least for the moment weakened the case for a potential trend change we have discussed in these pages a few weeks ago (we currently assume that the bottoming process is simply becoming more drawn out). Conversely, if a trend change were to actually happen, it would lend strong support to the ruble and the stock market.

Putin is proving remarkably durable as a politician. It is ironic that his approval rating is actually better during the current recession than it was during the preceding upswing, but one should never underestimate the emotional appeal of nationalism. We have little doubt that he indeed enjoys strong voter support (e.g. the Levada Institute is well-known for the quality of its data).

Russia’s economic situation has forced the Putin administration to adopt a number of economic reforms as we have previously reported. While we are currently not sure whether these proposals have been fully implemented or how successful their implementation was/is, the pressure that has led to their adoption remains in place.

Although the performance of the stock market and especially the ruble obviously remains highly dependent on energy prices, we continue to believe that the Russian stock market represents an opportunity based on valuation considerations alone. It is still the cheapest stock market in the world, and usually tends to magnify EM rallies. Also, once it gets going, it usually runs up a lot in a very short time, so it is often interesting from a shorter term trading perspective as well.