As The Atlantic so aptly notes, the hottest year in the global climate record is ending with a Storm that will Unfreeze the North Pole. A warm storm that is now predicted to bring never-before-seen above freezing temperatures in the range of 32 to 36 degrees Fahrenheit for the highest Latitude in the Northern Hemisphere by afternoon tomorrow. A storm expected to dump six inches of rain and bring 80 mile per hour winds to a Northern England already suffering the worst flooding events in all of its long history. A storm that will rage ashore in Iceland packing 90-100 mile per hour winds and hurl both heavy rains and snows across that volcanic isle.

(Three of Frank’s multiple strong low pressure systems raging through the North Atlantic on Tuesday, December 29. At 956, 948, and 974 mb, two of these lows each pack the strength of a major hurricane — but with their energy spread out over a larger area. By late tonight two of these lows will have combined and tracked toward Iceland bombing out into a 920 mb class monster storm. Meanwhile, the far flung effects of these storms will have resulted in yet another round of high winds and very severe flooding for England. Image source: Ocean Prediction Center.)

It’s a storm with impacts stretching from just west of Spain and all the way to the North Pole itself. A sprawling monster of a thing covering the area the size of a small continent. The very precursor in fact of Dr. James Hansen’s ‘continent-sized frontal storms packing the strength of hurricanes.’ The dark beasts this visionary scientist feared might arise during an age in which the great glaciers of the world started to melt — the cool outflow of their waters conflicting with a raging human forced warming of the globe to radically destabilize the world’s weather (see Storms of My Grandchildren).

The impacts of this storm, which the UK Met Office is now calling Frank, could well be tremendous. Cumbria in Northern England may be set to experience yet another ‘worst flood on record’ — one of three occurring just this month. And the 920 mb range central low of this sprawling system is forecast to rip through the heart of Iceland itself. But the more visible risk of damages to England and Iceland may well pale in comparison to the quiet, yet drastic impacts taking place in the far north.

(Unprecedented doesn’t even begin to describe rain over Arctic sea ice above the 80 degree North Latitude line on the evening of Tuesday, December 29, 2015. It’s something we’d rarely see during summer time. But this rain is falling through the black of polar night during the coldest time of the year. Image source: Climate Reanalyzer.)

There, over the Arctic sea ice today, the rains began in winter time.
As the first front of warm air proceeded over the ice pack to the north of Svalbard, the rains fell through 35-40 degree (F) air temperatures. It splattered upon Arctic Ocean ice that rarely even sees rain during summer-time. Its soft pitter-patter a whisper that may well be the sound to mark the end of a geological age.
For we just don’t see rain over Arctic sea ice north of Greenland during Winter time. Or we used to not. But the warmth that liquid water falling through the black of what should be a bone-cold polar night represents something ominous. Something ushered to our world by human fossil fuel industry’s tremendous emission of heat trapping gasses. Gasses that in the range of 400 ppm CO2 and 485 ppm CO2e are now strong enough to begin to roll back the grip of Winter. Gasses, that if they keep being burned until we hit a range between 550-650 ppm CO2 (or equivalent) will likely be powerful enough to wipe out Winter as we know it entirely over the course of long and tumultuous years of painful transition.
What does the beginning of the end of Winter sound like? It’s the soft splash of rain over Arctic Ocean sea ice during what should be its coldest season.
Links:
The Storm That Will Unfreeze The North Pole
Warm Arctic Storm to Bring Above Freezing Temps to North Pole
Storm Frank to Bring More Flood Misery
Climate Reanalyzer
Storms of My Grandchildren
NOAA’s Ocean Prediction Center
Hat Tip to Neven’s Fantastic Arctic Sea Ice Blog
Hat Tip to DT Lange
Hat Tip to Spike
Hat Tip to Ryan in New England


The Storm That Will Unfreeze the North Pole

It caps off a month—and year—of weird weather. 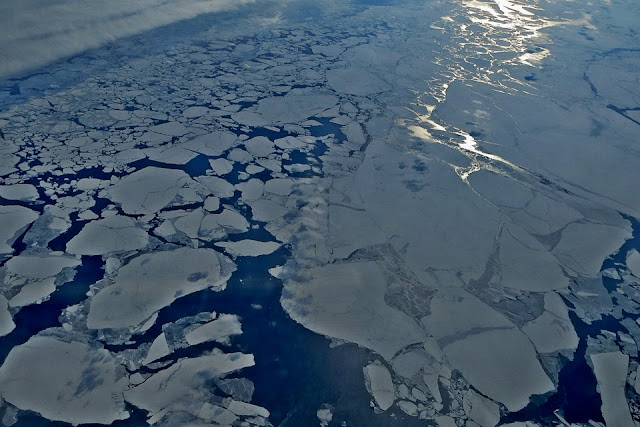 The sun has not risen above the North Pole since mid-September. The sea ice—flat, landlike, windswept, and stretching as far as the eye can see—has been bathed in darkness for months.
But later this week, something extraordinary will happen: Air temperatures at the Earth’s most northernly region, in the middle of winter, will rise above freezing for only the second time on record.
On Wednesday, the same storm system that last week spun up deadly tornadoes in the American southeast will burst into the far north, centering over Iceland. It will bring strong winds and pressure as low as is typically seen during hurricanes.
That low pressure will suck air out of the planet’s middle latitudes and send it rushing to the Arctic. And so on Wednesday, the North Pole will likely see temperatures of about 35 degrees Fahrenheit, or 2 degrees Celsius. That’s 50 degrees hotter than average: It’s usually 20 degrees Fahrenheit below zero there at this time of year.
Winter temperatures have only snuck above freezing at the North Pole once before. Eric Holthaus, Slate’s meterologist, could not find an Arctic expert who had witnessed above-freezing temperatures at the pole between December and early April.
2015 is the warmest year ever recorded. Thirteen of the top 14 warmest years on the books have happened this century. And here in the United States, it has been a hot, strange month. Many cities across the northeast smashed their Christmas and Christmas Eve temperature records not at midday, but at the stroke of midnight. For the hundred-plus years that New York temperatures have been recorded, the city has never been warmer than 63 degrees Fahrenheit on a December 24. Yet at 1 a.m. on Christmas Eve of this year, the thermometermeasured 67 degrees.
Some of this North American heat is a regular feature of every El Niño. (Indeed, I wrote about this El Niño-associated heat a few weeks ago.) But in the Arctic, this level of warmth is unprecedented. In order for this huge, hot storm to reach Iceland on Wednesday, it’s punching  right through the Jet Stream, the atmospheric “river” that brings temperate weather to Europe. Yet El Niño should typically reinforce this current, explains the climate writer Robert Scribbler—for the Jet Stream toweaken is a sign that something else is going on.
While institutional science will take years, if not decades, to confirm a correlation between human-forced climate change and strong North Atlantic storms, Scribbler believes that Wednesday’s insane warmth at the pole resembles the southern incursions of the “polar vortex” that have been seen in recent winters. These changes are related to human-forced climate change, he writes: a sign that something in the atmosphere has gone “dreadfully wrong.”