Working Towards The Führer. 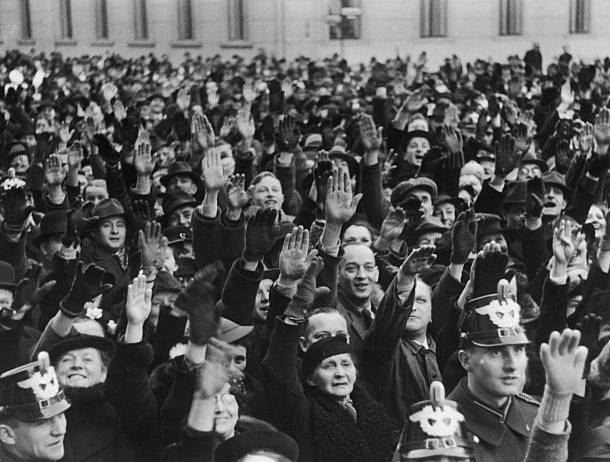 All Together Now! In terms of the inviolability of the new neoliberal establishment, it mattered very little whether Labour or National was in power. And, since cabinet ministers from both sides of the aisle clearly regarded ideological boat-rocking as being every bit as career-terminating as state sector CEOs, there was scant incentive to entertain any alternative definitions to what constituted “good governance”. In the years since 1984, therefore, it has made much more sense, personally and politically, to “work towards the [neoliberal] führer”.

AN “AFFRONT TO DEMOCRACY”, was the State Services Commissioner’s characterisation of the state bureaucracy’s decision to spy on political activists. Few would disagree. That multiple state agencies felt entitled to contract-out the gathering of political intelligence to the privately owned and operated Thompson & Clark Investigations Ltd reveals a widespread antidemocratic disdain for citizens’ rights within the New Zealand public service. The alarming revelations of the State Services’ inquiry raise two very important questions: How did this disdain for democratic norms become so entrenched? And what, if anything, can Jacinda Ardern’s government do to eradicate it?

The dangerous truth, in relation to the first question, is also painfully relevant to the second. The effective abrogation of democratic norms in New Zealand dates back to 1984 and the events which the former CTU economist and ministerial adviser, Peter Harris, characterised as a “bureaucratic coup d’état”. In was in July 1984 that elements within the NZ Treasury and the Reserve Bank, taking full advantage of the relationships they had been cultivating for at least a year with the parliamentary leadership of the NZ Labour Party, initiated the detailed and extremely radical economic policy programme which came to be known as “Rogernomics”.

This programme, set forth in “Economic Management” – the book-length briefing paper for the incoming Minister of Finance, Roger Douglas – had received no mandate from the electorate. Indeed, the ordinary voter had no inkling whatsoever that the Labour Party of Mickey Savage and Norman Kirk was about to unleash a programme considerably to the right of Margaret Thatcher’s and Ronald Reagan’s. The authors of “Economic Management” were not, however, interested in obtaining a democratic mandate for their proposed reforms. In fact, they strongly suspected that submitting their ideas to the voters was just about the surest way of securing their emphatic rejection.

Since the mid-1970s the conviction had been growing among big-business leaders and high-ranking civil servants living in the wealthiest capitalist nations, that democracy had gotten out of hand; and that unless the scope for democratic intervention in the economy was radically reduced, then the future of capitalism could not be guaranteed. Free Market Economics, as it was called then, or Neoliberalism, as we know it today, was, from the outset, incompatible with the social-democratic principles that had underpinned western policy-making in the post-war world. It could only be imposed, and kept in place, by a political class sealed-off from all manner of pressures from below. If that meant gutting the major parties of the centre-left and right; purging the civil service, academia and the news media of dissenters; and crushing the trade unions – then so be it.

Once it became clear that the free-market “revolution” was not about to be halted in its tracks, all those with an ambition to rise within the new order made haste to learn its rules and spared no effort in enforcing them. This phenomenon: of absorbing and implementing an antidemocratic regime’s imperatives was described by British historian of the Third Reich, Ian Kershaw, as “Working Towards The Fuhrer”. Kershaw lifted the phrase from a speech delivered in 1934 by the Prussian civil servant, Werner Willikens:

“Everyone who has the opportunity to observe it knows that the Fuhrer can hardly dictate from above everything which he intends to realize sooner or later. On the contrary, up till now, everyone with a post in the new Germany has worked best when he has, so to speak, worked towards the Fuhrer. Very often and in many spheres, it has been the case—in previous years as well—that individuals have simply waited for orders and instructions. Unfortunately, the same will be true in the future; but in fact, it is the duty of everybody to try to work towards the Fuhrer along the lines he would wish. Anyone who makes mistakes will notice it soon enough. But anyone who really works towards the Fuhrer along his lines and towards his goal will certainly both now and in the future, one day have the finest reward in the form of the sudden legal confirmation of his work.”

The behaviour of New Zealand civil servants and their private sector contractors conforms very neatly to Kershaw’s thesis. In terms of the inviolability of the new neoliberal establishment, it mattered very little whether Labour or National was in power. And, since cabinet ministers from both sides of the aisle clearly regarded ideological boat-rocking as being every bit as career-terminating as state sector CEOs, there was scant incentive to entertain any alternative definitions to what constituted “good governance”. In the years since 1984, therefore, it has made much more sense, personally and politically, to “work towards the [neoliberal] führer”.

Certainly, Kershaw’s “Working Towards the Führer” thesis would explain the behaviour that has so disturbed readers of the State Services Commission’s report like Victoria University’s School of Government academic, Chris Eichbaum. Namely, why so few of the people involved in this “affront to democracy” displayed any awareness that they were behaving unethically. If Neoliberalism, like the Third Reich, is not a force which can be legitimately contradicted or criticised, then obviously any person or group engaging in activities inimical to the implementation of state policy is bound to be considered an enemy of the system.

Not that the neoliberal order will ever acknowledge its political imperatives so honestly. A large measure of bad faith continues to operate within the system. It has to – otherwise the still useful façade of human rights and democratic consent will rapidly fall apart.

Ministries and other state entities reach for the private investigator rather than the police officer because the latter is still (at least in theory) accountable. By contrast, the paper and/or electronic trails left by the likes of Thompson & Clark are considerably more difficult to track than those carefully logged in an official Police investigation. What’s more, the unofficial and private aggregation of “evidence” against the State’s “enemies” opens up the possibility of their unofficial and private punishment.

That job the activist lost, or failed to get. The bank loan that was refused. Simple bad luck? Or something else?

The most sinister aspect of the “Working Towards The Fuhrer” phenomenon is that any obstacles or objections encountered along the way will be taken as evidence of forces working against the führer. Popular resistance to neoliberal objectives is never taken as a sign that those objectives might be ill-advised, counterproductive, or just plain wrong. Rather, it is taken as proof that those responsible for organising such resistance are dangerous and irrational opponents of beneficent policies to which there are no viable alternatives.

It appears never to have occurred to Gerry Brownlee, for example, that the rising levels of desperation and anger among the Christchurch clients of the state-owned Southern Response insurance company – feelings that were manifesting themselves in threats to life and property – might be evidence of massive failures on the company’s part. John Key, similarly, refused to accept that oil and gas exploration might constitute a genuine threat to New Zealand’s (and, ultimately, the entire planet’s) natural environment.

Was Simon Bridges, when he introduced legislation outlawing waterborne protests within 2 kilometres of the oil and gas industry’s drilling platforms, doing no more than working along the lines and towards the goals of his leader?

As above, so below: the law of hierarchy is immutable. Thomson & Clark may have been the tool in the hands of ruthless public servants “working towards the führer”, but the masters of those servants were the neoliberal politicians from both major parties who, ever since 1984, have been tireless in their defence of the neoliberal order against its most fearsome foe – the New Zealand people.

The question, therefore, arises: If the Coalition Government demonstrates the slightest willingness to move against the servants of that neoliberal order (as Greater Christchurch Regeneration Minister, Megan Woods, by forcing the resignation of the Chair of Southern Response, has arguably done already) will the same forces that subverted Labour in 1984 set in motion the measures necessary to bring down Jacinda Ardern’s “issue motivated group” in 2020?