Tsunami in Indonesia DESPITE NO QUAKE!

At least 20 people have been killed after a tsunami struck Indonesia, despite no quake being recorded.
The waves hit beaches around Sunda Strait on Saturday night (local time, Sunday morning NZ time), according to the Indonesian Disaster Mitigation Agency.
At least 165 have been injured.
The Indonesian Meteorology, Climatology, and Geophysical Agency said it may have been the result of volcanic activity at Krakatoa.
Sunda Strait lies between Java and Sumatra, connecting the Java Sea and Indian Ocean.
When Krakatoa erupted in 1883, more than 36,000 people died and world temperatures were cooler for the next year.

At least 20 people have been killed as a tidal wave hit beaches around Sunda Strait in Indonesia on Saturday night, according to the country's Disaster Mitigation Agency. Another 165 have been injured.
The Indonesian Meteorology, Climatology, and Geophysical Agency (BMKG) said the wave was not caused by an earthquake, but was possibly the result of volcanic activity at Mount Krakatoa.

Video filmed at one of the affected beaches and posted on Twitter shows the wave rolling in as beachgoers scramble away from the water.

Images from the other side of the Sunda Strait showed the aftermath of the wave. 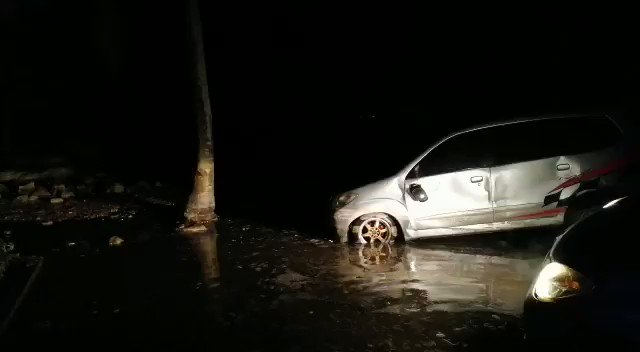 2,191 people are talking about this
Twitter Ads info and privacy
Sunda Strait separates the islands of Java and Sumatra. Its coast is located about 100km (62 miles) from the Indonesian capital, Jakarta.
MORE DETAILS TO FOLLOW