The Saker’s article yesterday raised important points revealing contradictions and even a level of hypocrisy in Russian policy.

It is well worthwhile careful reading, especially for people who are prepared to look at proper analysis and not just reflexive and emotional reactions based on one’s fixed postion.

Some people think that Putin and Lavrov are beyond reproach because they are 'brilliant strategists' while others think they have 'old out' can do no good.

I disagree with both.The first positon is naive while the latter is reprehensible.

An example of this is an attack on the Saker by “Texas” Bentley who I otherwise admire. As an analyst, however, he does not hold a candle to the Saker.

Since the news of Netanyahu's visit to Moscow and the concurrent attack on Syria by Israel and the silence that surrounded it I have seen a lot of self-justification for Putin's actions (which I am not necessarily criticising) and not a word of criticism of Israel's actions.

I have noticed that Russian mainstream TV is full of zionists. In particular the show "Sunday" with Vladimir Soloviev (himself a Jew) is full of guests who are open zionists.

As here ,with this justification of a massacre


"Lavrov can’t try to get a deal going with Israel and, at the same time, whine about the “US Plan on Arab Troops Deployment in Syria ‘Sovereignty Violation’”! How about the never-ending violation by Israel of Syria’s sovereignty? How it is less repugnant than the one being perpetrated by the USA? Are such statements not fundamentally hypocritical?” 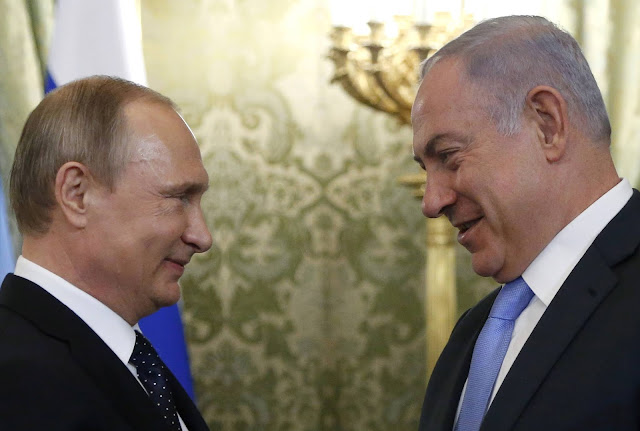 Here are some extracts from the Saker's article

….even those who think that this is no big deal and that nothing terrible happened will not, if they are honest, deny that Putin must have known, without any doubt, that his decisions would be unpopular with the Russian public and that, very uncharacteristically for him, he deliberately chose to ignore his only public opinion and favor other considerations. That is something very new and, I think, something important....

Over the past few years, Putin and Russia haters were predicting doom and gloom and all sorts of betrayals (or Novorussia, Syria, Iran, etc.) by Putin and Russia. Then time passed and all their predictions proved false. Instead of just talking, the Russians took action which proved the nay-sayers wrong. This time however, the Russians said and did a number of things which gave *a lot* of fuel to the Putin-haters and the only way to undo that is to take real action to prove them wrong. Right now as a result of these self-inflicted PR-disasters Russia looks very bad, even inside Russia were many Putin supporters are confused, worried and disappointed.

Externally, the Syrian and, especially, the Iranians need to come to terms with the fact that Russia is an imperfect ally, one which sometimes can help, but one which will always place its personal interests above any other consideration. In a personal email to me Eric Zuesse wrote “I think that Putin and Netanyahu are negotiating how far Israel can go and what Russia can accept — and what cooperation each will provide to the other — drawing the red lines of acceptability, for each side”. I think that he is spot on, but I also think that Putin is wrong in trying to make a deal with Israel, especially if a deal is at the expense of Iran. Ostashko is right. Objectively Israel has very little to offer Russia. But if this kind of collaboration between Russia and Israel continues, especially if Iran is attacked, then we will know that the Israel lobby inside Russia is behind these policies which go counter to the Russian national interest. We will soon find out.

In the meantime, Lavrov can’t try to get a deal going with Israel and, at the same time, whine about the “US Plan on Arab Troops Deployment in Syria ‘Sovereignty Violation’”! How about the never-ending violation by Israel of Syria’s sovereignty? How it is less repugnant than the one being perpetrated by the USA? Are such statements not fundamentally hypocritical?

We can observe a paradox here: Putin has criticized the evil immorality of the western society and imperial policies many times (most famously in Munich and at the UN). But Putin has never said anything about the evil immorality of the state of Israel. And yet Israel is the center of gravity, the nexus, of the entire AngloZionist Empire, especially since the Neocons turned Trump into their subservient lackey. In this, and in so many other areas, Russia needs to follow the example of Iran whose leaders have shown far more morality and principled policies in spite of Iran being much smaller and comparatively weaker than Russia.

In 2006 a thousand men or so of Hezbollah dared to defy the entire AngloZionist Empire (the US was, as always, backing Israel to the hilt) and they prevailed. Russian soldiers have shown time and again, including recently in Syria, they they have the same type of courage. But Russian politicians really seem to be of a much more tepid and corruptible type, and there is always the risk that Putin might gradually become less of an officer and more of a politician. And this, in turn, means that those of us who oppose the Empire and support Putin and Russia must imperatively make that support conditional upon a clearly stated set of moral and spiritual principles, not on a “my country right or wrong” kind of loyalty or, even less so, on a “the enemy of my enemy is my friend” kind of fallacy. Should Putin continue in his apparent attempts to appease the Israelis a new type of internal opposition to his rule might gain power inside Russia and new internal tensions might be added to the already existing exernal ones.

Right now Putin still has a lot of “credibility capital” left in spite of his recent mistakes. However, Putin recent decisions have raised a lot of unpleasant questions which must be answered and will so in time. In the meantime, as they say in the USA, “hope for the best, prepare for the worst, and settle for anything in the middle”. The Scripture also warns us not to make idols of leaders: “Trust not in princes, nor in the children of men, in whom there is no safety” (Ps 145:3 LXX). The worldly evil we are fighting, today in the shape of the AngloZionist Empire, is but a manifestation of a much deeper, spiritual evil: “For we wrestle not against flesh and blood, but against principalities, against powers, against the rulers of the darkness of this world, against spiritual wickedness in high places” (Eph. 6:12). The young men and women from the Shia movement Amal got it right when they chose the name “Party of God” for their movement when they created Hezbollah in 1985. And Iran was right when it became an Islamic Republic: if we want to defeat the Empire we need to always let spiritual matters and moral crieria remain above any of our “pragmatic” worldly political considerations or national/ethnic loyalties: that is how we can defeat those who place a dollar value on absolutely everything they see in their narrow materialistic worldview....

There is a very high likelihood that Israel will succeed in triggering a US attack on Iran. If/when that happens, this will trigger a political crisis inside Russia because the space for the current political ambiguities will be dramatically reduced. On moral and on pragmatic grounds, Russia will have to decide whether she can afford to be a bystander or not. This will not be an easy choice as their shall be no consensus on what to do inside the ruling elites. But the stakes will be too high and the consequences of inaction prohibitive. My hope is that a major military conflict will result in a sharp increase of the power and influence of the military “lobby” inside the Kremlin. Eventually and inevitably, the issue of Israel and Zionism will have to be revisited and the pro-Israeli lobby inside Russia dealt with, lest Russia follow the same path to self-destruction as the USA. For this reason the concept of “true sovereignization” is the one patriotic slogan/goal that Eurasian Sovereignists must continue to promote (regardless of the actual terminology used) because it points towards the real problems in Russian internal and foreign policies which must be addressed and resolved. This will be a long and difficult process, with victories and setbacks. We better get used to the idea that what happened in the past couple of weeks will happen again in the future.
Posted by seemorerocks at 19:22