Major ice losses are almost certain over the next week

Many thanks to Nicholas Humphrey.

High surface temperature anomalies forecast over Greenland much of next week. Tuesday morning will see average Greenland anomalies +6.3 C above pre-industrial climatology. I adjusted the anomaly shown below (which is based on 1981-2010 climate) by +1.8 C.

Initially a small cyclone will bring rain and interior freezing precipitation to the central east coast and east-central Greenland. This, followed by anomalous warmth may focus much of the surface melt from the the eastern half of the ice sheet next week. Shown below total accumulated precipitation through 7 am CDT Monday. Most of this precipitation is expected over the weekend.

The very anomalously strong surface high pressure system forecast Sunday. The surface air flow will be favorable for sea ice melting and breaking up to be transported into the Barents Sea and also blow offshore from the north shore of Greenland and the Canadian Archipelago.

In a normal climate, this break from offshore winds wouldn't be an issue because of thick, multi-year ice...but such ice has become largely extinct, causing very thin ice to break up off the north shore of Greenland and the Canadian Archipelago.
Below is a polar-orbiter image of Greenland on July 24th. Note the break up of ice on the northeast coast, well as around the Canadian Archipelago closer to the Beaufort Sea farther west.

Close up of the north Greenland break up. Offshore winds the next week will make further break up from the coast more likely.

Close-up of the break up of ice along the Canadian islands in the middle and the Beaufort Sea on the left of the image. Also notice the cracks in the sea ice sheet over the open ocean above to the right of the islands. Northwest Greenland is in the bottom right corner.

Estimated sea ice thickness...most of the ice near and along the north coast of Greenland and the Canadian Archipelago is only 2-2.5 meters thick, with isolated areas up to 3 meter thick ice only right up against the shorelines. Much of the rest of the ice around the Arctic Ocean is only 0.5-1 meter thick. All of this ice appears easily prone to break up.

The current sea ice extent and concentration vs. the 1981-2010 climatological extent. Dramatic. 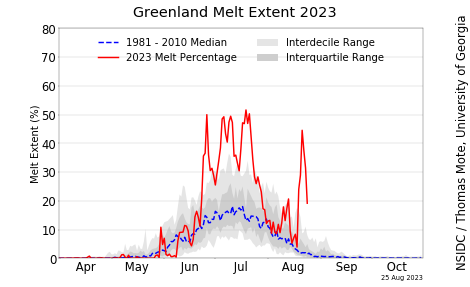 Abrupt climate change is leading to the ongoing destruction of the sea ice and Greenland Ice sheet. The loss of sea ice is accelerating Arctic warming causing major jet stream disturbances (including intense heatwaves and wildfires in the mid-latitudes and Arctic), increased wave action and coastal erosion from cyclones, and rapidly melting permafrost which is releasing carbon dioxide, methane and nitrous oxide. The heatwaves over Greenland are and will accelerate sea level rise.
For daily updates on the state of the global cryosphere, see this Updating Page.
---Meteorologist Nick Humphrey
Posted by seemorerocks at 11:15