Fires are contributing to the increase in greenhouse gases that are leading to our destruction. Forest fires in Krasnoyarsk region caused the smell of burning and haze. Picture: Asya Vostrikova
Pictures show the scale of the smoke in major population centres from the raging wildfires with
the cause seen mainly as out-of-control forest fires in Krasnoyarsk region, the second largest in Russia.
In Krasnoyarsk city, residents have been told by health officials to go outside only if really
necessary.
Here watchdog Rospotrebnadzor confirmed the hygienic standard  in the air of the PM 2.5
particles is exceeded by between 1.2  and 2.3 times. Locals in Krasnoyarsk came up with the idea to draw the desirable landscape on the
smoky pics. Pictures: @anytka_and_sem, @primierro
Sensors installed by activists on Saturday showed a ‘dangerous excess of the maximum
permissible concentrations’.
Dust, soot and other small particles are shown as present in the air.
On Saturday morning, the MPC values ranged from 42 to 74, with the safe value of 25 units.
Later the sensors showed readings from 221 to 344. 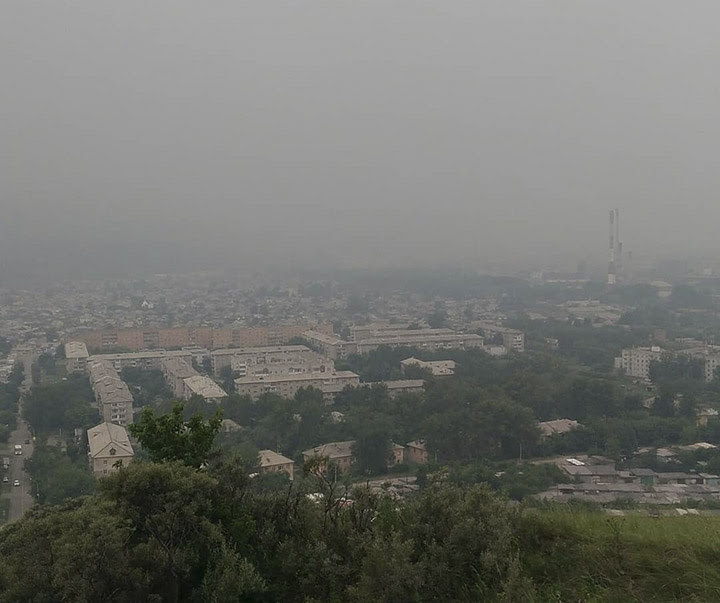 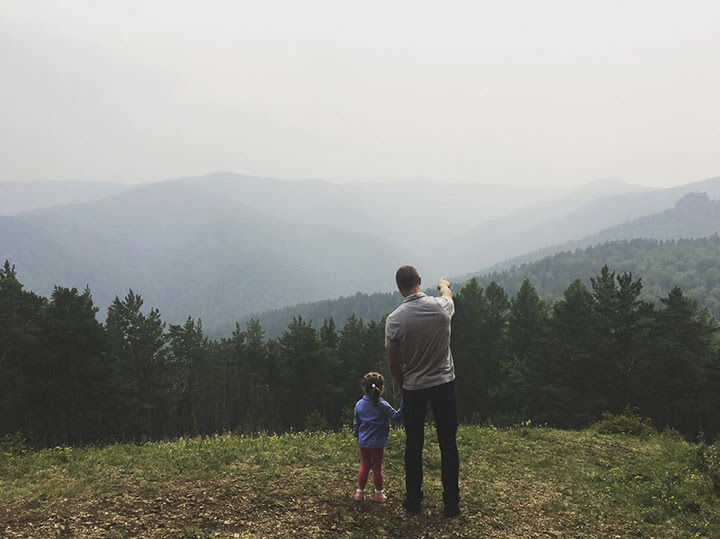 Sensors installed by activists on Saturday showed a ‘dangerous excess of the maximum permissible concentrations’.
The limited visibility and smell of burning is observed in all districts of Krasnoyarsk, and in
villages and towns in the vast region, for example, Lesosibirsk and Achinsk.
The regional government in Krasnoyarsk blamed lightning for starting most fires.
They reported: ‘An emergency regime is introduced in the region, (and) people have limited
access to forests.’ 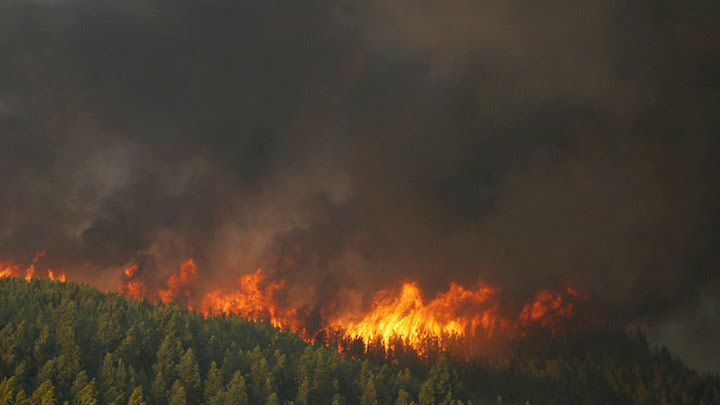 Some 492,750 hectares of forests are ablaze in Krasnoyarsk region and some 217,418 hectares are burning in Irkutsk region.
The pollution from wildfires in Krasnoyarsk has spread with air flows over a huge geographical
area to other regions.
A strong smell of burning and thick haze covered Tomsk city on Saturday.
Experts explain this was caused by high humidity in the city plus air masses blowing from
regions where the wildfires are raging.
A representative of the Russian Ministry of Emergencies in the Tomsk region explained: 'Forest
fires in Krasnoyarsk region caused the smell of burning and haze over Tomsk.
‘There are currently no forest fires in (our) region. 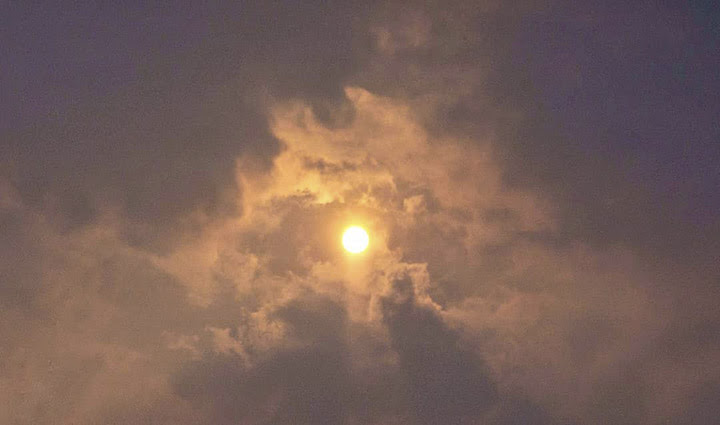 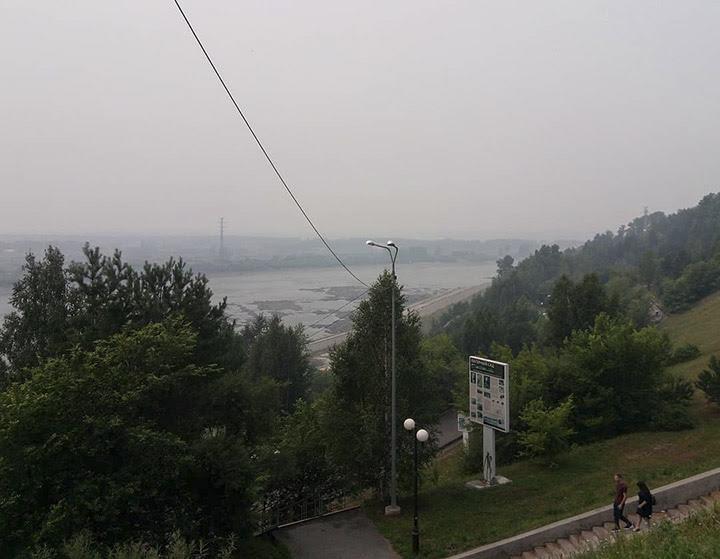 A strong smell of burning and thick haze covered Tomsk city on Saturday.
‘According to the observations of the Tomsk Centre for Hydrometeorology and Environmental Monitoring, the excess of maximum permissible concentrations of pollutants has not been
observed in the atmospheric air.'
Residents in Kemerovo complained in social networks about the smell of burning and the
smoke that stands over the city.
A local weather expert said: 'We are in the centre of a cyclone.
’It pumps in the air and directs it from the north to us.
‘Tomorrow the north wind is also expected… but rains may clear the area, which will purify the atmosphere.’ 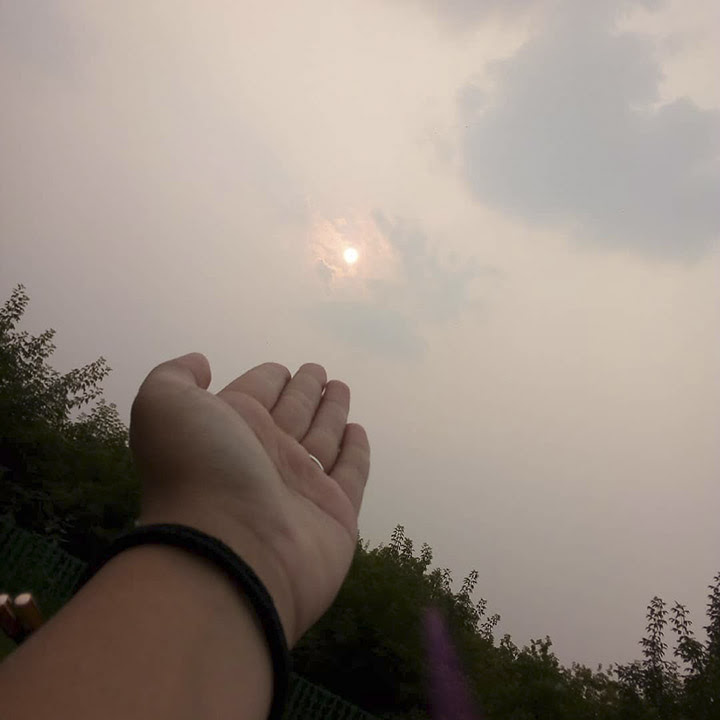 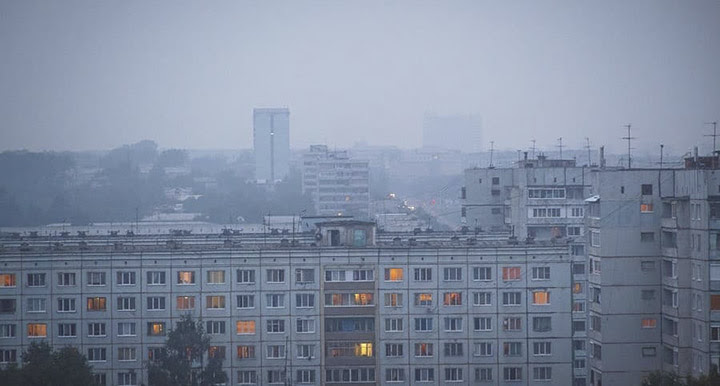 Residents in Kemerovo complained in social networks about the smell of burning and the smoke that stands over the city.
Siberia’s largest city Novosibirsk was also hit by a smell of burning and there was light haze.
In the morning of July 21 smog appeared and the smell significantly increased.
The CityAir service estimates air pollution at 8 points out of 10, the situation began to deteriorate at about 2 am.
This was despite the Ministry of Emergency Situations in Novosibirsk region stating their were
no fires on its territory
‘Krasnoyarsk firesafe giving us the smoke,' said a spokesman. ’The wind is northeasterly.’ 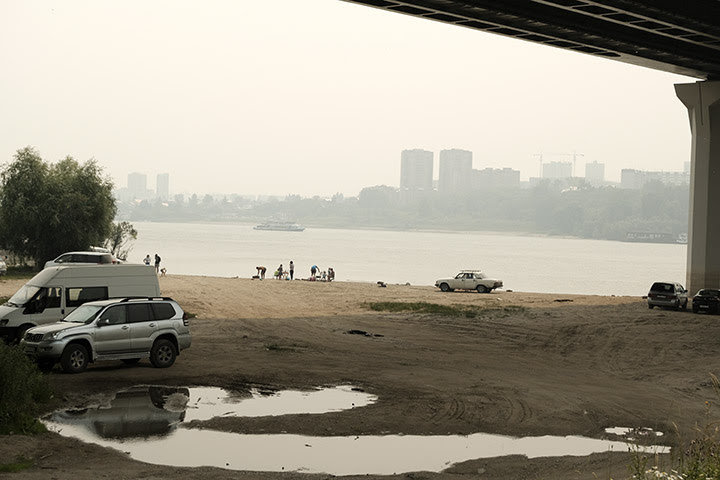 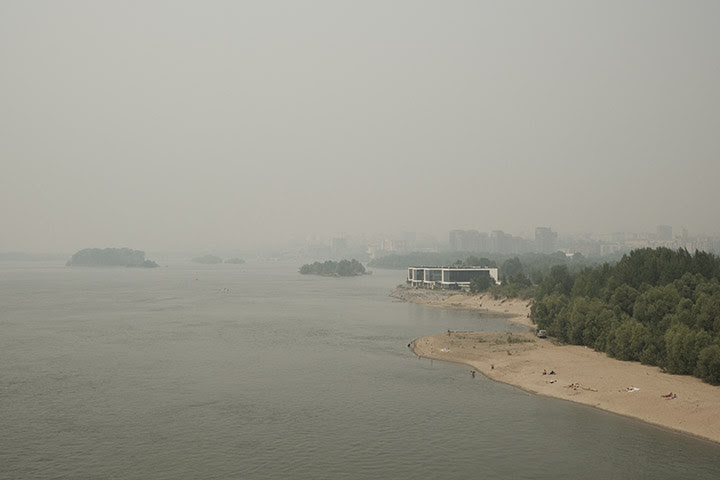 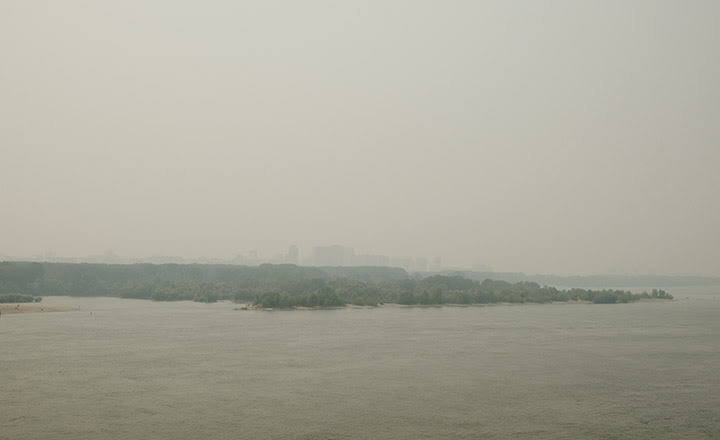 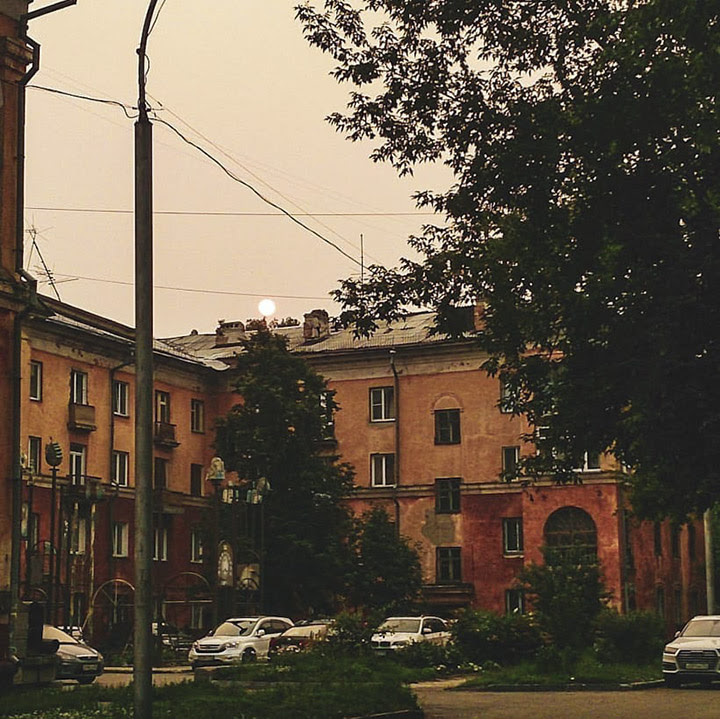 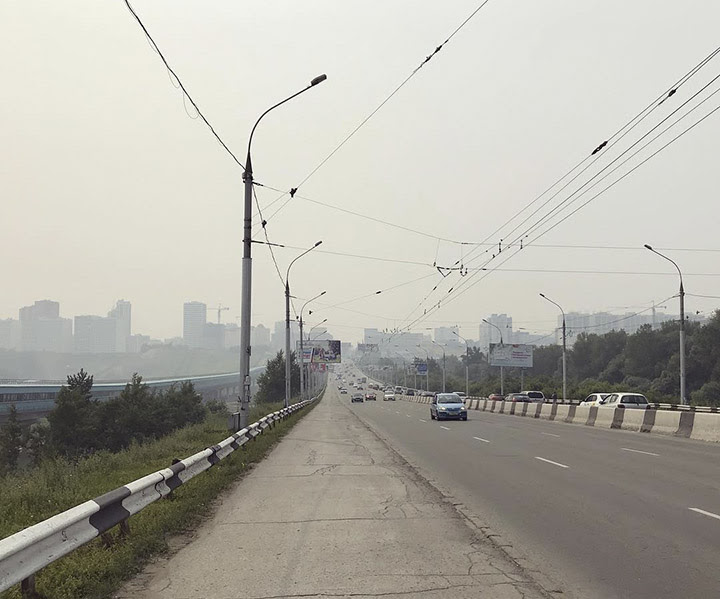 Siberia’s largest city Novosibirsk was also hit by a smell of burning and there was light haze.
According to the Federal Service Avialesokhrana on 21 July, some 492,750 hectares of forests
are ablaze in Krasnoyarsk region and only 28,366 are being extinguished.
Smoke from wildfires is observed in several districts of the Irkutsk region, further to the east.
Smoke covered Bratsky, Chunsky, Ust-Ilimsky, Nizhneilimsky and Ust-Kut districts.
As of the morning of 21 July, 86 forest fires are registered in Irkutsk region.
The total area of burning forests is 217,418 hectares.
Fire extinguishing is carried out by forest protection troops.

Meanwhile, President Putin flew directly to Bratsk in Siberia from a meeting with Belarus' Lukashenko to visit floods in the Irkutsk region

Putin Flies to Siberia in Dead

of Night! Situation in Irkutsk

From Saint Petersburg, where he met with Lukashenko, Putin flew to Siberia, late in the night due to the time zone difference. At the instruction of the president, almost half of the government arrived in Bratsk. It's the second time Putin visits Irkutsk Oblast in the last 2.5 weeks. He's flying to the town of Tulun by helicopter. This town was hit the hardest by the flood. 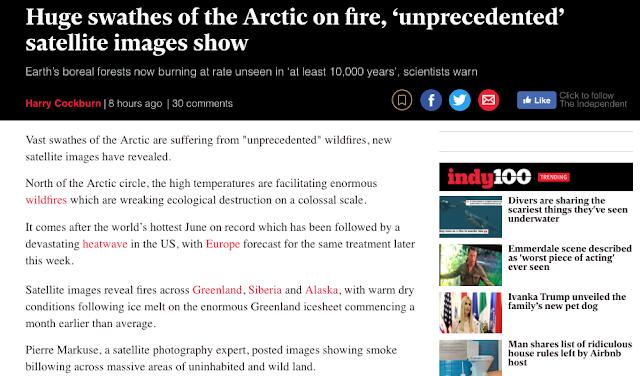 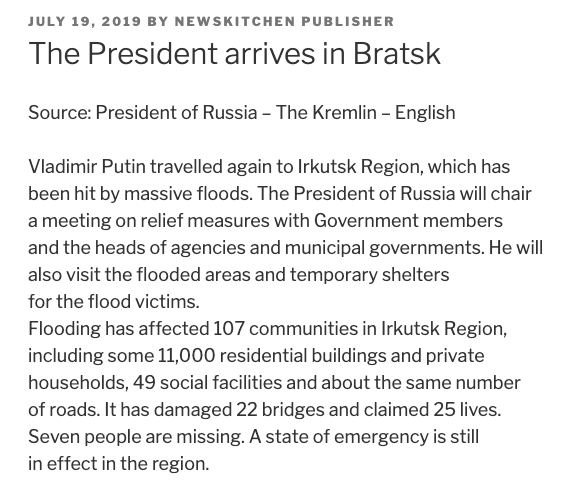 Imagine, this started at the end of JUNE and is still going on and

necessitated another trip by President Putin 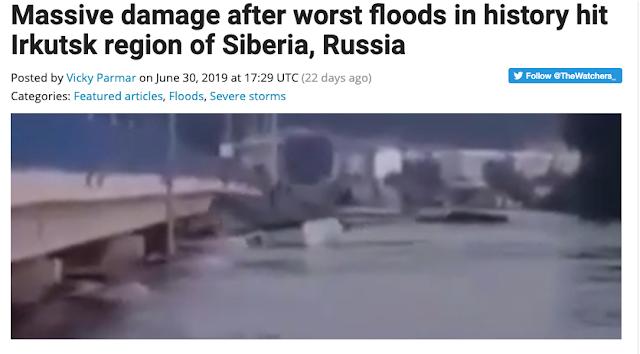 https://watchers.news/2019/06/30/massive-damage-after-worst-floods-in-history-hit-irkutsk-region-of-siberia-russia/
Posted by seemorerocks at 18:01