Some food shortages kick in

"Due To A Poor Harvest

Authored by Michael Snyder via The Economic Collapse blog,

I know that this headline is alarming, but it is actually a direct quote from a notice that was recently posted in a Kroger supermarket. 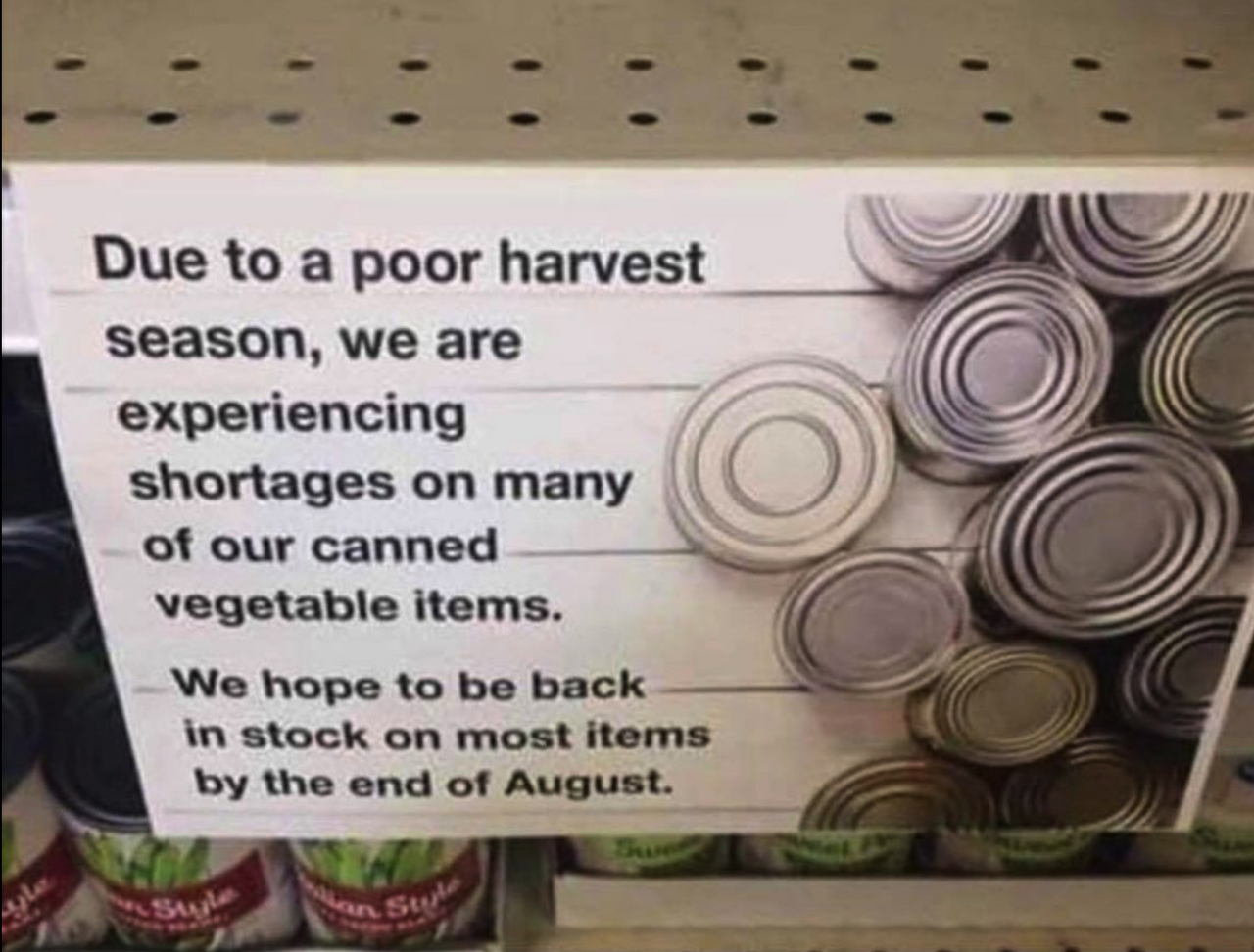 And as you will see below, similar notices are being posted in the canned vegetable sections of Wal-Mart stores nationwide.  I would encourage you to examine the evidence in this article very carefully and to come to your own conclusions about what is happening.  At this moment, social media is buzzing with reports of shortages of canned vegetables all around the country.  But so far, the mainstream media is being eerily quiet about all of this.  Is there a reason why they aren’t saying anything?


For months, I have been reporting on the extremely bizarre weather patterns that are causing crop failures all over the planet.  But I certainly did not expect that we would already begin to see product shortages on the shelves of major U.S. supermarkets this summer.  What I am about to share with you is shocking, but the truth needs to get out.  For those that share my articles on your own websites, I know that all of the images in this article are going to be an inconvenience, but it is imperative that you include them when you republish this article because they tell a story.  All of the images are taken directly from Facebook, and they prove that we are now facing a nationwide shortage of canned vegetables.
So let’s get started.
This first image was posted on Facebook by Scott L. Biddle, and it shows a “product shortage” notice that was posted in the canned vegetable section of a Wal-Mart in Tennessee… 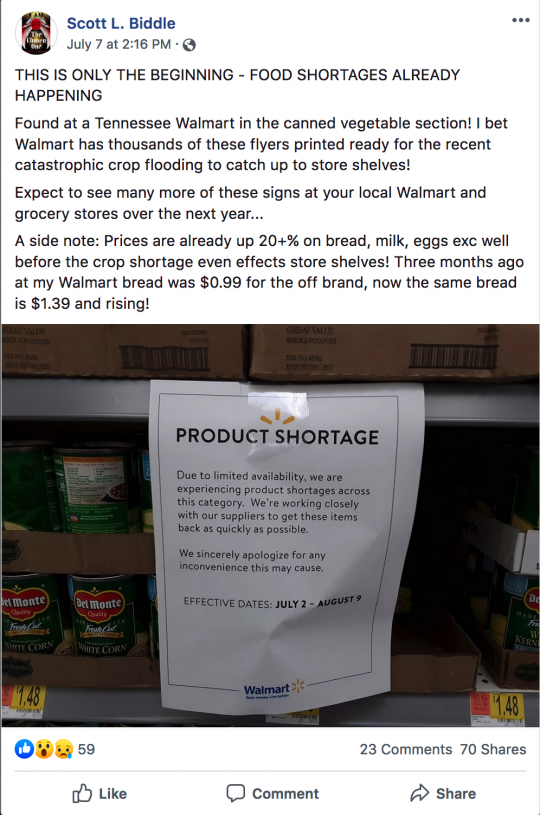 All the way over on the west coast, similar notices were photographed by Gina Helm Taylor in the state of Oregon on July 12th… 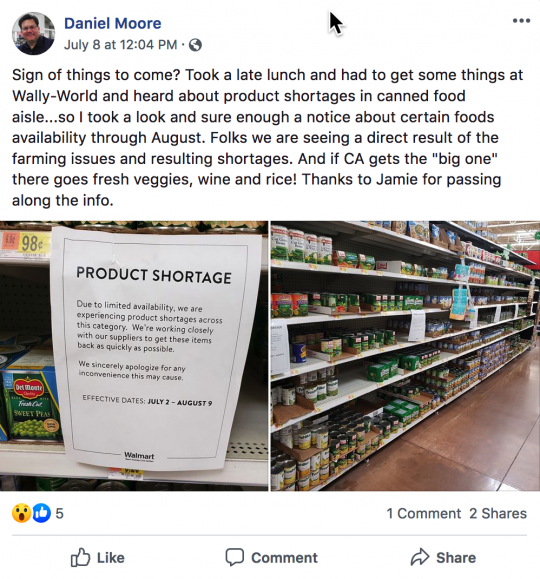 It appears that the exact same notices were sent to Wal-Mart stores all across America.  Here is another one from Carol Guy Hodges… 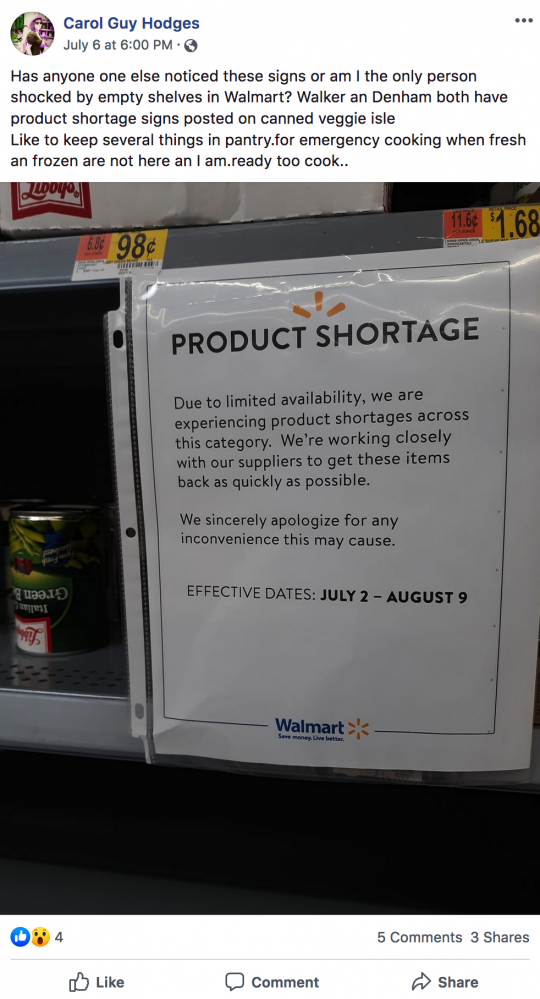 And lastly, here is a photo that was shared by Randy Sevy… 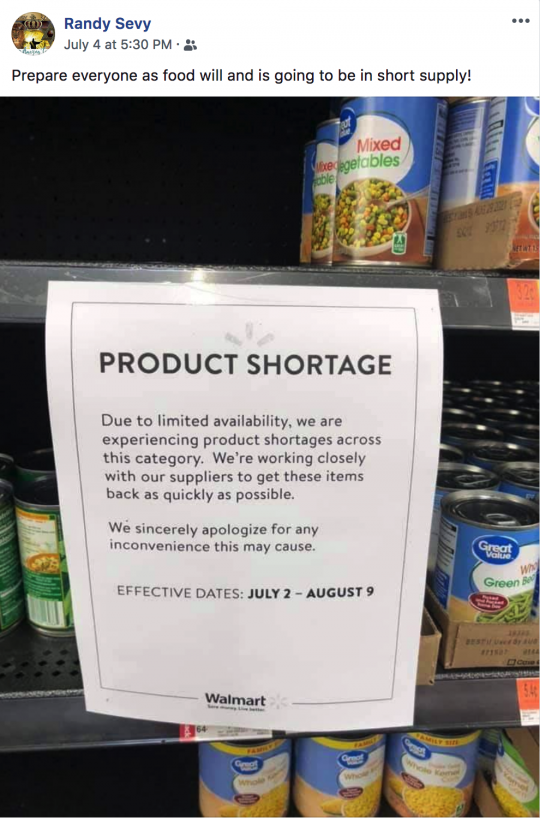 This certainly isn’t the end of the world, and we can definitely survive without canned vegetables for a few weeks.
But as crop failures around the globe continue to intensify, will shortages such as this start to become increasingly common?
Earlier today, I received a very detailed email from a reader that had some excellent intel about what was going on at his own local Wal-Mart.  The following is an excerpt from what he sent to me…

This is alarming in and of itself, however, they are experiencing shortages across most product categories. The only information I could find online was pointing to a driver shortage. I noticed the shortage over the holiday weekend and returned this past weekend to take a closer look. There were problems with paper products, OTC medications, pickles (everyone wanted pickles?), lunch meats and hot dogs, vinegar, produce, alcohol, eggs, cereal, and feminine hygiene products. None of these items had signs like those posted in canned veggies, instead there were small tags placed over the original price tag the say “out of stock” in very small print.
While a driver shortage could cause issues, it’s a little odd to me that there are 12 packs of toilet paper and 6 packs of coke but no 24 packs of either. One of the items being restocked were more of the 12 packs of toilet paper. Does a driver shortage account for this? Another oddity is that one Walmart may have pickles but no tortillas while the exact opposite will be true for a different Walmart. The employees that would normally be stocking were instead counting products (manually) and pulling product to the front of the shelves. There was a six foot stretch of Cheerios along one shelf that was one box deep, hiding the empty shelves behind them.
One more item to note is that the first trip I made over the fourth of July weekend was to purchase canned corn. They had 9 cans of what I was looking for so I purchased them all. The following weekend they had restocked the same corn (there were 10 cans) but the price had increased almost 30%! The original purchase was for $1.44 while one week later the price had increased to $1.88.

Sadly, the economic law of supply and demand is going to continue to push prices higher.
And the tighter that food supplies become, the higher prices will go.
Since the mainstream media is being completely silent about this, many people on social media don’t have much information to go on.  Speculation is rampant, and many are fearing the worst.
One Facebook user named Stephen Dubaniewicz believes that all of the product shortage notices at his local Wal-Mart could mean that a food shortage is on the way… 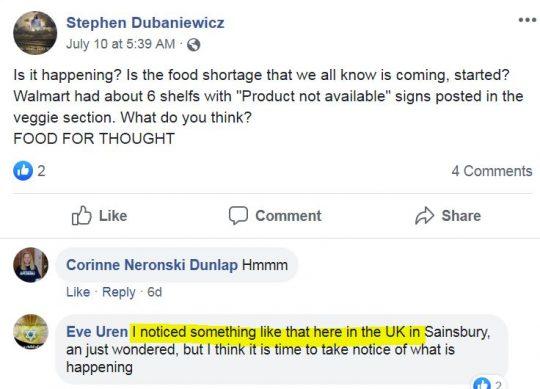 Hopefully we have some more time before things start getting really bad, but I would encourage you to use this time to get prepared while you still can.
For months, I have been documenting the problems that U.S. farmers have been experiencing due to all of the endless rain and flooding in the middle of the country.
But sometimes a picture is worth a thousands words, and this before and after photo from Nebraska speaks volumes… 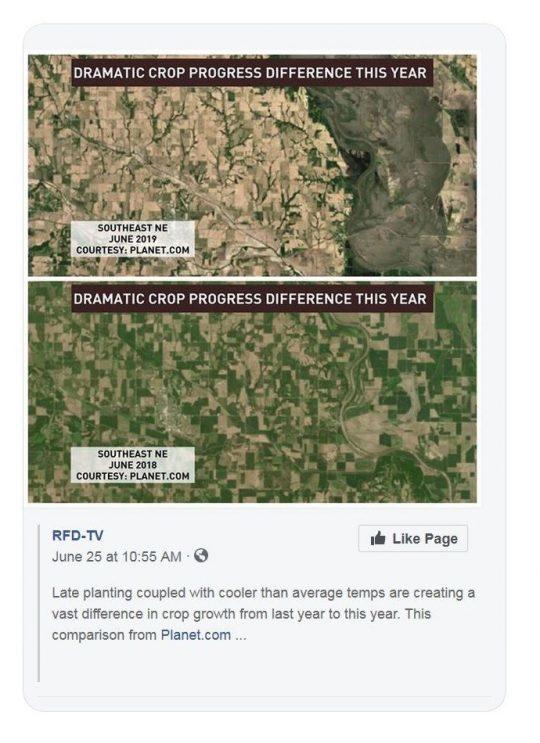 We know that food production in the United States is going to be way below expectations this year.
And as I just showed you, it appears that a shortage of canned vegetables has already begun.
A full-blown crisis has not arrived yet, but perhaps one is a lot closer than many of us had anticipated.
This is a huge story, and I will continue to keep you updated.
Posted by seemorerocks at 18:21