Are birds falling from the sky in Australia carrying avian EBOLA? 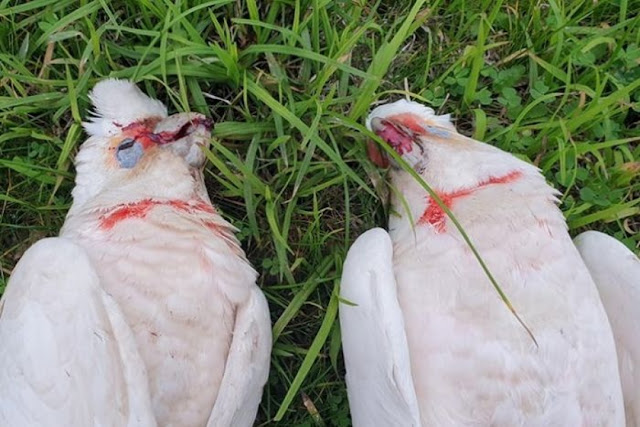 Dozens of birds were believed to have been poisoned after animal rescuers found more than 60 "falling out of the sky" near an Adelaide, Australia primary school. But necropsy (an animal autopsy) testing shows the birds infected with a Hemorrhagic Virus similar to Ebola - which CAN spread to humans! When the virus was isolated, officials allegedly issued ORDERS to conceal the true cause to prevent pubic panic.

The birds were found dead or dying near One Tree Hill Primary School, in Adelaide's north, on Wednesday.

A volunteer from Casper's Bird Rescue who went to investigate reports of the dead birds called for help when about 60 Corellas were found either dead or dying in the area.

Casper's Bird Rescue founder Sarah King said she did not believe any of the birds had survived.

"It was obvious then that it was a bit more of a situation than we thought … from my understanding none have survived. 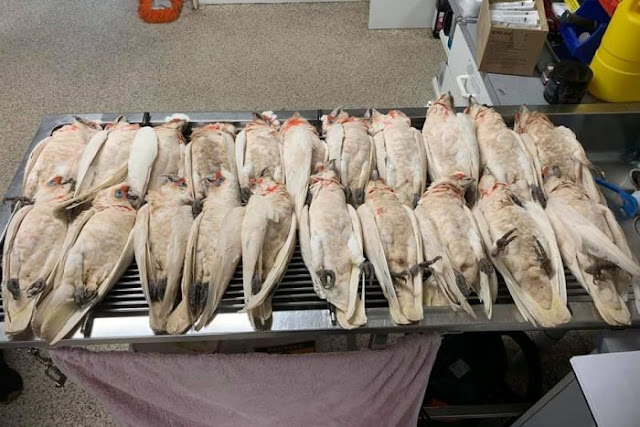 Ms King said the animal rescuers had contacted the local city council to make sure it had not used some type of poison which may have killed the birds, and it said only herbicides were used that were not dangerous for wildlife.

One Tree Hill Primary School posted on social media following the find and said there were "no survivors" out of the birds collected.

"The children in vacation care were very upset at the scene of birds falling from the sky and in pain, with blood coming out of their mouths," the Facebook post said.

If this is some type of Human-infection-capable, bird-borne Hemorrhagic virus, there will literally be no way to stop it from spreading. Birds go everywhere and we think nothing of it.

Think about the possibilities: They land on water fountains, drink in lakes and ponds, poop . . . on everything. Other animals prey on birds . . . would those predators get infected too? This has "disaster" written all over it.

Folks in Australia should pay close attention to how this is resolved; their very lives may depend on it.

Here is the original report 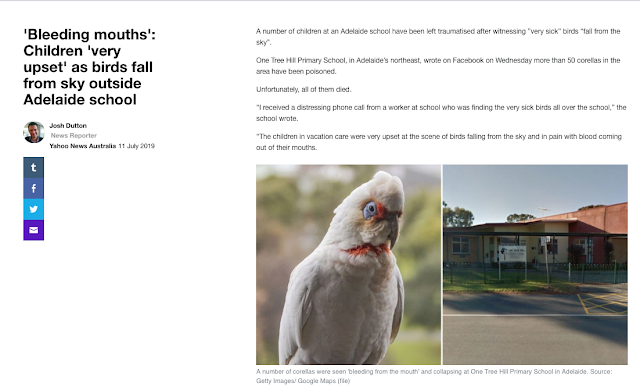 A number of children at an Adelaide school have been left traumatised after witnessing ”very sick” birds “fall from the sky”.

One Tree Hill Primary School, in Adelaide’s northeast, wrote on Facebook on Wednesday more than 50 corellas in the area have been poisoned.

Unfortunately, all of them died.

“I received a distressing phone call from a worker at school who was finding the very sick birds all over the school,” the school wrote.

“The children in vacation care were very upset at the scene of birds falling from the sky and in pain with blood coming out of their mouths.

“The children were so caring and wanted to make sure the birds were getting some help.”

The school added the animal rescue took the birds into its care.

“The rescue will continue to ensure our children do not need to see this in their school grounds,” the school wrote.

One woman wrote the news was “very disturbing”.

“I think children could be traumatised by such a horrible thing. And so cruel,” she wrote.

Others called it “terrible” and “horrible”.