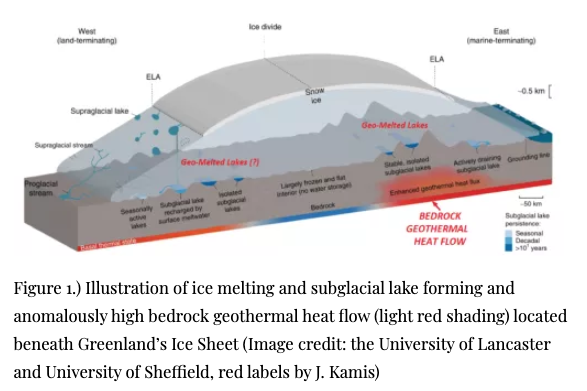 
Yet another major research study, five if you’re counting, has concluded that accelerated melting at the base of Greenland’s glacial ice sheet is from anomalously high geothermal heat.
High heat flow, according to the combined areas of the four previous studies (NASA, Aarhus University, University of Kansas, University of Maryland), is present beneath 50% of the world’s second-largest ice sheet as shown in Figure 2 (cross-hatched red).

Also of interest in Figure 2 are outlines of above-sea-level high-bedrock heat-flow areas bordering Greenland, specifically the Svalbard Islands Hotspot (red hatched) and the Iceland Mantle Plume (red hatched), which are both fueled by hot molten lava and heat flow from the deep inner earth reaching the Mid-Arctic Spreading Center  (black hatched) fault system.
The reader is directed to previous Climate Change Dispatch articles that summarize the results of these four research studies and their impact on Arctic climate and climate-related events here, here, here, and here.
Now onto the discussion of the just-released research study by the University of Lancaster and University of Sheffield. Research that established for the very first time the existence of an estimated fifty-four subglacial lakes beneath Greenland’s vast glacial ice sheet.
Study researchers attributed the generation of these lakes to numerous factors, most notably geothermal high-bedrock heat flow that the authors term “enhanced geothermal heat flux.”
This study is of special interest because it provides detailed information that can be utilized to formulate a detailed explanation of exactly how bedrock heat flow generates Greenland’s subglacial lakes:

In summary, it’s way past time for the media, responsible scientific organizations, and political entities seeking the truth to step forward and inform the public of the significant, dominant role of Greenland’s extensive geothermal heat flow in melting glacial ice.
Silence by these entities is no longer a truthful option because it indirectly supports the notion that manmade atmospheric warming is the 100% proven cause.  It’s not.

James Edward Kamis is a retired professional Geologist with 42 years of experience, a B.S. in Geology from Northern Illinois University (1973), an M.S. in geology from Idaho State University (1977), and a longtime member of AAPG who has always been fascinated by the connection between Geology and Climate. More than 42 years of research/observation have convinced him that the Earth’s Heat Flow Engine, which drives the outer crustal plates, is an important driver of the Earth’s climate as detailed at his site Plate Climatology Theory.
Posted by seemorerocks at 11:49