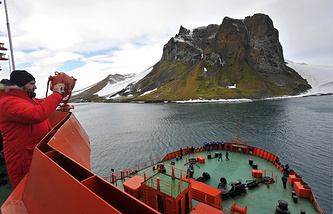 MOSCOW, October 29. /TASS/. Russian scientists during an expedition on board the Akademik Keldysh research vessel found new sources of methane emissions in the Arctic, the Ministry of Education and Science’s press service said on Friday.

"Russian scientists have found a new big area in the East Arctic’s seas with big emissions of greenhouse gases," the press service said. "They also saw that emissions in earlier found areas had become more active."

According to specialists, the new area of methane’s massive emissions from sediments has formed recently, as only a few years earlier, during previous expeditions, that field was not found. Thus, they say, the process proves continuing anomalously quick degradation of the permafrost on the ocean floor.

Scientists received another confirmation of the continuing processes as they took pictures of the Podkova (horseshoe) seep field. Seeps are areas where methane bubbles fountain from the seafloor. The field’s diameter has multiplied since the previous studies in 2014.

The Akademik M. Keldysh research vessel returned to Arkhangelsk’s port on October 25. A team of specialists from Russia’s leading scientific institutions worked for 35 days. At the East Arctic’s seas, they made a complex of bio-geo-chemical, geo-physical and geological studies.