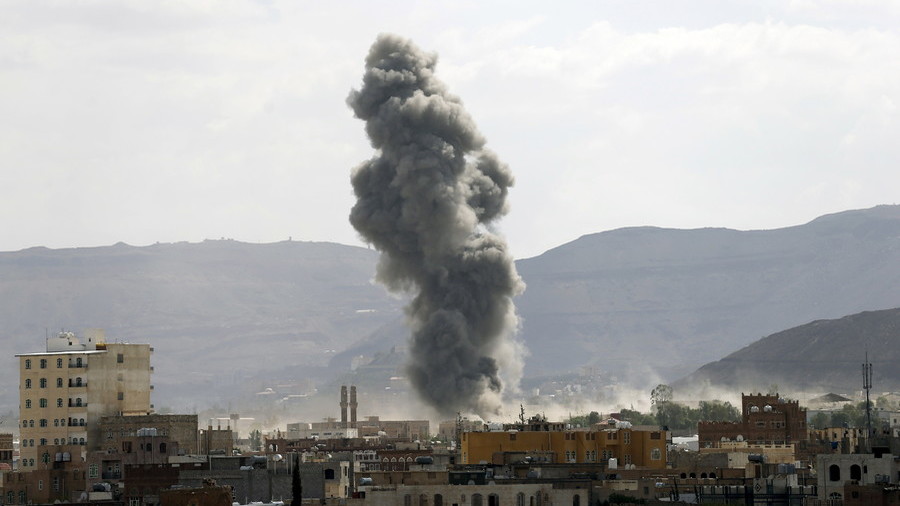 The US Secretary of State, Mike Pompeo, has urged the Saudi-led coalition to stop airstrikes in heavily populated Yemen, shortly after Defense Secretary Jim Mattis said a that long-lasting ceasefire is the only possible solution.

"Time is now for the cessation of hostilities, including missile and UAV strikes from Houthi-controlled areas into the Kingdom of Saudi Arabia and the United Arab Emirates. Subsequently, Coalition air strikes must cease in all populated areas," Pompeo said in a statement.

“It is time to end this conflict, replace conflict with compromise, and allow the Yemeni people to heal through peace and reconstruction,” declared the top diplomat of the country that supplies the coalition with the bulk of its weapons, as well as intelligence and reconnaissance assistance.

Just hours earlier – while noting that American aircraft continue to provide aerial refueling and intelligence to Saudi jets attacking Yemeni targets – the Pentagon chief also demanded that the warring parties work towards a long-lasting peace. “We want to see everybody around a peace table based on ceasefire, based on a pullback from the border, and then based on ceasing dropping bombs,” Mattis said at the Institute of Peace (USIP).

Some US lawmakers have long called on US leadership to halt support for the Saudi-led coalition, which has been bombing Yemen since March of 2015, causing thousands of civilian deaths. The calls to cut the sales of weapons to the Gulf Kingdom, however, really intensified only in wake of the murder of Jamal Khashoggi, the dissident Washington Post columnist killed inside the Saudi consulate in Istanbul earlier this month.

While Donald Trump has repeatedly refused to cancel the record $110 billion arms sales contract he signed with the Saudis last year, some US lawmakers paradoxically considered winding down US support for the war in Yemen as a way to punish Riyadh for the Khashoggi murder. Mattis, however, emphasized Tuesday that he views the journalist's death and the conflict in Yemen as totally separate issues.

‘Not satisfied’ after all: Trump wants more answers, but won’t scrap Saudi deals over Khashoggi case

Three US senators have called on the Pentagon to immediately reveal the extent of US military support to the Saudi-led Arab coalition that launched an attack on Hodeidah, a key port city and last...

Tuesday's statements by top US leadership signals a drastic shift from a mute White House approach to the three-year-old conflict, which has claimed over 10,000 lives and plunged Yemen into humanitarian disaster.

The Arab coalition has, since 2015, been waging a brutal military campaign in Yemen against Houthi rebels, in an attempt to restore exiled president Abd Rabbuh Mansour Hadi to power. Three years of Saudi-led bombardment and a blockade of Yemen has led to a catastrophic situation in the country, with 22 million people, or 80 percent of the population, in dire need of humanitarian aid. Throughout the entire course of the conflict, Riyadh and its allies have repeatedly been accused by NGOs of indiscriminate bombings of civilians and infrastructure in the country, using mainly Western-supplied weapons.

In the latest fallout over the murder of journalist Jamal Khashoggi, the United States is demanding that Saudi Arabia make nice with Qatar, according to sources quoted in Bloomberg.

Three officials with knowledge of the issue have described to Bloomberg that the US is "raising pressure" on the kingdom to "wind down" its ongoing "political and economic isolation of Qatar" at a moment that Riyadh is potentially facing its own such isolation as international outrage has grown since the October 2nd slaying of Khashoggi inside the Istanbul consulate.

One U.S. official further says the Saudis are being asked to "take steps" to wind down its over three-year long bombing campaign in Yemen, or at least to greatly mitigate the factors causing a massive humanitarian crisis in famine — an ironic and contradictory request given the Pentagon's own lead role as part of the Saudi coalition.

Since June of 2017, when a rift came out in the open and Saudi Arabia led a full economic and diplomatic blockade of its tiny oil and gas rich neighbor along side three other Gulf Cooperation Council states of the UAE, Kuwait, and Bahrain (non-GCC Egypt also initially cut ties), the two sides have essentially been in a state of war; however Qatar has remained defiant throughout the unprecedented crisis, relying on its vast oil wealth to weather the storm.

The land, air, and sea Saudi-led boycott has included aggressive economic sanctions, even food blockages, as most of Qatar's basic staples had previously been supplied by land via Saudi Arabia. But it's been hugely awkward for Western allies of both countries like the United States and Britain, as Qatar hosts the largest US/UK military base in the Middle East, Al Udeid Air Base, located 20 miles southwest of the Qatari capital of Doha and home to some 11,000 US military personnel, plus Royal Air Force units.

Given Washington's close economic and military ties to both countries, healing the inter-GCC schism has been a priority for the White House, and it now appears to be using the international outcry to pressure Riyadh in an amenable direction regarding Qatar.

Could the pressure already be working? Last week at the Saudi Future Investment Initiative (FII) hosted in Riyadh, which a number of Western companies and media outlets boycotted, Crown Prince MbS took the the previously unheard of step (since the 16-month crisis with Doha began) of acknowledging the resilience of Qatar’s “strong economy” and forecast progress over the next half decade.

“Even Qatar, despite our differences with them, has a very strong economy and will be very different” in the next five years, the prince said at an investment summit in the Saudi capital as he explained his vision for the Middle East’s place in the world. — Bloomberg

These words alone signal an opening between the two countries that could lead to detente under Washington oversight.

Though Trump had previously seemed to endorse the Saudi position that Qatar is a state sponsor of terror in the region and had helped facilitate Iranian influence and expansion, former Secretary of State Rex Tillerson had previously attempted to negotiate an agreeable closure to the crisis and softening of tensions, without success.

But it appears that in the end the Saudis will only perhaps respond to what they know best — blackmail. So ultimately should MbS survive the heat of the Khashoggi investigation, it will likely come at the expense of having to make nice with Qatar and play by other Washington rules as well.

Secretary of Defense Jim Mattis has called for a ceasefire in the Yemen civil war within 30 days, reports AFP.

"We want to see everybody around a peace table based on a ceasefire, based on a pullback from the border & then based on ceasing dropping of bombs...you can’t say we’re going to do it sometime in the future. We need to be doing this in the next 30 days," said Mattis while speaking at the United States Institute of Peace

Mattis on Yemen Civil War: "We want to see everybody around a peace table based on a ceasefire, based on a pullback from the border & then based on ceasing dropping of bombs...you can’t say we’re going to do it sometime in the future. We need to be doing this in the next 30 days"

Replying to @JackDetsch_ALM
Mattis says US support to Saudi Arabia and UAE in Yemen is limited: “we refuel less than 20 percent of their aircraft. They have their own refuelers by the way.”

Jack Detsch@JackDetsch_ALM
Mattis says US refueling support of Saudi and UAE jets “provide a level of capability so they are not killing innocent people.” Hints that the US is looking for a ceasefire in 30 days to accelerate the peace process in Yemen. “I believe that the Saudis and the Emirates are ready”

Mattis added "I believe the Saudis and the Emiratis are ready."

The big take from #Mattis:
*Assad has to be managed out of power : Any election has no credibility
*Calling for a ceasefire in Yemen within 30 days
*A new approach for the solution in Yemen