A synchronized worldwide drought.would be a colossal killer


The Great Drought
by ROBERT HUNZIKER 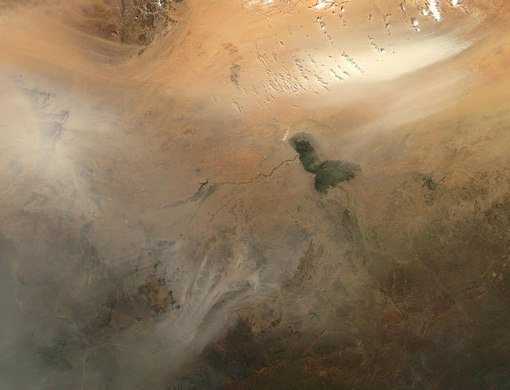 
The most hazardous global warming risk for society at large is widespread loss of grain production because of a synchronized worldwide drought. It would be a colossal killer. It’s happened before, known as The Great Drought 142 years ago.

Unmistakably, droughts feed off global warming and world temps are heading up, not down. Thus, droughts are intensified by temperature increases. If the same conditions as the drought of 1876 recurs, it would likely be a nightmarish scenario.

Fortuitously, ever since The Great Drought of 142 years ago, droughts have been regional, e.g., when Russia experienced wheat shortages in 2011 as a result of extreme drought, which led to the Arab Spring, other countries like Brazil and the U.S. picked up the slack. The world continued spinning!

But, what if a severe drought hits the planet once again on a global basis like The Great Drought of the late 19th century? Then, what happens?

World population was only 1.4 billion when The Great Drought of 1876-78 killed 5.5 million in India alone, 50 million worldwide, but today’s world population is 4.5xs larger. Does this mean that global famine redux would bring in its wake 225 million deaths, or more? (Source: Researchers Say an 1800s Global Famine Could Happen Again, State of the Planet, Earth Institute/Columbia University, Oct. 12, 2018)

Answer: First, hit the big red button that bonks the clarion bell in the public square to awaken people to the fact that the human footprint, in part and increasingly, negatively influences climate change for the first time since Adam & Eve. Given enough time, anthropogenic global warming itself will hit the drought hot-stuff button. That’s one reason for nations of the world to commit to omitting fossil fuels, which emit CO2, which blankets the upper atmosphere, retaining way too much heat. It’s called “global warming.”

The Great Drought and Global Famine of 1876 originated from natural variability or nature taking its own course. Hands down, it remains to this day one of the worst human disasters of all time with 50,000,000 dead. Killed by the forces of nature alone!

Singh’s study is the first-ever global-scale analysis of climatic conditions of 1876 utilizing multiple sources of data, including rain gauges and tree-ring drought atlases that go back in time 800 years, as well as multiple datasets of past climatic conditions.

Based upon the facts as presented by their comprehensive study, a recurrence of The Great Drought initiated by natural variability as prompted via an El Niño event in 1876-78 in today’s world would likely turn into an ultra nasty turbo-charged affaire, as anthropogenic global warming jumpstarts drought into a hyper-speed mode.

Recall, anthropogenic global warming was minimal in 1876. Whereas today’s rampant anthropogenic effect superimposed on a repeat of 1876 drought conditions is a disaster waiting to happen, as bad as it gets.

The Great Drought of the 19th century extended from Egypt to Australia, southwestern and eastern North America, Brazil, India, and China with Asia’s drought the worst in 800 years. In a word, it was worldwide. And, it was enormously deadly.

“Understanding the drought’s driving forces is important, says Singh, since they could strike again at any time—perhaps worse than ever, since hotter temperatures make droughts more intense,” (Causes of the Great Famine, One of the Deadliest Environmental Disasters, American Geophysical Union Fall Meeting, 12-15-17, Earth Institute, Columbia University)

Already, drought conditions around the world are starting to resemble something much more perilous than the regional drought events over the past century, which have always been offset by other crop-growing regions not in drought, to wit:

According to Drought.gov, as of October 16, 2018, in the United States, drought conditions currently impact 46 million people and 20% of the land area. One-half of the impacted people live in California, which also happens to be the nation’s largest producer of nuts, vegetables, and fruit.

The entire Southwest is suffering from aberrant drought conditions, meaning severe drought, adversely impacting the Colorado River Basin, key to major population centers, as well as irrigation for crops that feed America. As a result, it’s possible that Phoenix may be forced to ration water sometime in the near future. Colorado River flow is down 40%.

According to the U.S. Bureau of Reclamation, as of August 2018, the Lake Mead reservoir is only “5 feet above the shortage threshold.” Five feet lower and cutbacks will be necessitated by 2020 (If this one fact alone doesn’t cause Bureau officials to shake in their boots, then nothing will).

The snow that falls in the Rocky Mountains provides the majority of the water for the Colorado River. But, warming temperatures, altered hydrology patterns, misuse, and drought have diminished the water source. This is one prime example of global warming at work.

Argentina, one of the world’s top exporters of soy and corn, experienced its worst drought in decades in early/mid 2018 accompanied by steep decline in exports of grains hammering its economy as losses in grain exports amount to $3.4B. But, as of October ‘18, it’s anticipated grain crops will rebound. (Source: TheWatchers.news, Sept. 2018)

The 2015 Brazilian drought is still ongoing and considered the worst in 80 years, causing sp0radic water cutoffs to residents of São Paulo (pop. 32 million), another scenario that “shakes officials down to their boots.”

Most shocking of all, the Amazon Rainforest has experienced three 100-yr droughts in the space of just 10 years! That’s mind-boggling beyond all belief, never happened before, and seriously disruptive to hydrology flow throughout the world, which negatively impacts precipitation patterns as far away as America’s grain belt. Another “shake down to their boots” scenario.

The European Association of Fruit and Vegetable Processors claim growing conditions in early/mid 2018 were the most challenging in 40 years because of drought conditions. Some vegetable products were hit by 50% drop-offs. (Source: TheWatchers.news, Aug. 8, 2018).

In the Far East, Inner Mongolia’s northeastern and eastern areas suffered its worst drought on record as 120,000 people and 500,000 livestock were clobbered by severe water shortages. Temps registered 1°C (1.8 °F) higher than the same period in years past; thus, drying out ground moisture. (Source: TheWatchers.news, June 28, 2018)

In Australia 30,000 Muslim worshippers came together for Eid al-Adha in harmony with farmers to pray for an end to what’s being called “the worst drought in living memory.” PM Turnbull declared the entire country “a land of drought.” (Source BBC news, Aug. 2018).

According to the UN, because of severe drought, about five million people in northern Senegal, southern Mauritania and parts of Mali, Niger, Burkina Faso and Chad, will require food and livelihood assistance, after having exhausted their food reserves.

Overall, drought conditions across the world are greater than the 1901-2017 average, meaning more land mass than normal subject to droughts. However, and thankfully, conditions are not at extreme critical levels… not yet!

According to David Miskus, drought expert for the National Oceanic and Atmospheric Administration (NOAA), more than lack of precipitation and high temps influence droughts. Droughts are amplified by overuse and overpopulation of land.

In that regard, ever since The Great Drought of 1876, landmass is being overused and overpopulated to an extreme, bringing in its wake considerably higher risks of deepening worldwide droughts. As global warming heats up year-by-year, it’s only a matter of time before large portions of the planet become drought impaired, morphing into the dreaded super drought.

All-in, global warming is an enormously risky anthropogenic event that must be confronted by well-grounded, serious-minded leadership behind a Marshall Plan-type effort to go to renewable energy sources. Otherwise, at some point in time it will be lights out for sufficient agricultural crop production.

But ill-advised and shortsighted leadership in America, which is the second largest CO2 emitter in the world, doesn’t see it that way. Ergo, America’s a bigger threat to world stability than the combined forces of worldwide terrorists groups. Hands down, it’s no contest.

Postscript: “God has cared for these trees, saved them from drought, disease, avalanches, and a thousand tempests and floods. But he cannot save them from fools.” John Muir (1838-1914), Father of the National Parks.
Posted by seemorerocks at 13:29