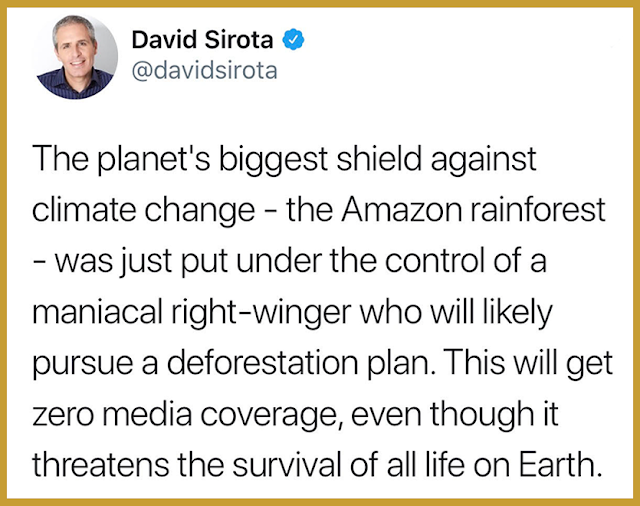 “Brazilians are exhausted by corruption, by rising violence, by an economy that just hasn’t improved,” and Bolsonaro has made a lot of promises to fix those things, according to Peter Prengaman, The Associated Press’ Brazil news director.

Bolsonaro, who has been called the “Trump of the Tropics” and has a history of making anti-gay, misogynistic,violent, and racistcomments, is also taking aim at the country’s environmental policies. And scientists across the globe are worried.

As Brazil’s president, Bolsonaro will control nearly two-thirds of the Amazon, the largest tropical rainforest on Earth. He has argued that too many environmentally protected areas are hampering the country’s development.

Bolsonaro has said he’s thinking about opening up a highway through the Amazon and barring environmental nongovernmental organisations like Greenpeace and the World Wildlife Fund from the country, The Guardian reported earlier this month.

Bolsonaro plans to cut down more of the world’s largest tropical rainforest, and critics fear he’ll ‘institutionalize genocide’ in the Amazon

Bolsonaro recently promised reporters that Brazil would stay in the Paris agreement, the landmark global climate deal he has been critical of in the past. But it’s unclear how he’d uphold Brazil’s end of that deal while simultaneously cutting down large swaths of the Amazon, which helps keep the world cool.

Bolsonaro has also indicated he plans to eliminate Brazil’s Ministry of the Environment, Science magazine reported.

“His reckless plans to industrialize the Amazon in concert with Brazilian and international agribusiness and mining sectors will bring untold destruction to the planet’s largest rainforest and the communities who call it home and spell disaster for the global climate,” Christian Poirier, the program director of Amazon Watch, said in a statement after Bolsonaro’s election.

Poirier isn’t the only one who’s concerned.

“I think we are headed for a very dark period in the history of Brazil,” Paulo Artaxo, a climate change researcher at the University of Sao Paulo in Brazil, told Science. “There is no point sugarcoating it. Bolsonaro is the worst thing that could happen for the environment.” Genevieve Guenther, who founded EndClimateSilence.org, said on Twitter that Bolsonaro’s election “guarantees that Brazil will do nothing to curb pollution emission and untold acres of the Amazon rainforest will be destroyed,” while the meteorologist Eric Holthaus argued that a forest-privatization scheme that the new president has in mind is essentially “planetary suicide.”

Other scientists, like Jess Phoenix, a volcanologist who ran in a Democratic primary race in Southern California over the summer, agreed.

Some indigenous people who live in the forest said they feared that more loggers and miners could head toward their homes under Bolsonaro.

“We are very scared. I fear for my own life,” Dinaman Tuxa, the national coordinator of Brazil’s Association of Indigenous Peoples, said in an interview with Brazil de Facto, adding that Bolsonaro would “institutionalize genocide.”

Christopher Dick, a tropical-plant expert at the University of Michigan, said on Twitter that if Bolsonaro “carries through on his rhetoric we can expect tribal genocide, torture of dissidents, and climate altering destruction of Amazon forest.”

“This is a nightmare scenario,” he added. “I hope I am wrong.”

The Amazon is literally breathing life into the planet

Plants in the rainforest suck carbon dioxide from the atmosphere, use the carbon to grow, and release oxygen back into the air. This is why the Amazon, which covers 2.1 million square miles, is often referred to as the “lungs of the planet.”

The forest helps our spinning ball breathe carbon dioxide in and exhale oxygen back out, performing a critical check on human-fuelled climate change. Scientists have estimated that the Amazon may house one-sixth of the carbon stored in vegetation around the world.

Environmental experts argue that this carbon-sucking system is one of the best solutions we have for climate change.

“We have to take carbon dioxide basically out of the atmosphere in order to prevent a very dangerous increase in temperature, and major increases in floods, severe storms, and heat waves,” Doug Boucher, a science adviser at the Union of Concerned Scientists,told Grist magazine earlier this month. “The best way we know to take carbon dioxide out of the atmosphere is to preserve and rebuild forests.”

Though the Amazon is the most diverse forest on the planet, scientists say that less than 0.5% of its flowering plant species have been studied for their medicinal potential, according to the WWF. Adamning new report the organisation released Tuesday said it found that “a fifth of the Amazon has disappeared in just 50 years.”

As Brazil has raced to keep pace with demand for more beef and soybean production, pieces of the Amazon the size of entire countries have been cleared. In one particularly intense tree-cutting period from 1991 to 2000, an area the size of Spain was cut down. That rapid pace of deforestation has slowed in recent years, though the trend of trading trees for livestock and agriculture is expected to continue.

Even though Amazonian soil is not good for farming, scientists estimate that an area the size of Delaware, or more than 1,900 square miles, was bulldozed through last year, and they expect that to rise under Bolsonaro.

Farmers attacking Brazilian natives on the border with Paraguay. They are without water, without food. Rent killers are still attacking indigenous people.


Farmers attacking Brazilian natives on the border with Paraguay

Farmers attacking Brazilian natives on the border with Paraguay. They are without water, without food. Rent killers are still attacking indigenous people.