William Nordhaus - the neoliberal economist behind the 2.0C target- winds the Nobel prize

Guy McPherson has referred a lot to William Nordhaus as the origin of the 2.0C target.

People love to join the crowd and put the blame for all climate change on the man with the yellow hair. However, given that the grounds of what we see today were laid years (even decades ago) this man would be one of the first I would like to see going to the gallows. 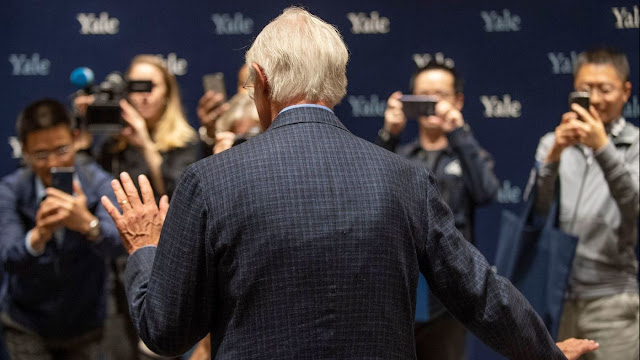 
It has been a scary month in climate science. Hurricane Michael and a frightening report from the U.N. Intergovernmental Panel on Climate Change underlined the potential costs of human-caused global warming. Then to add insult to injury, William Nordhaus won the economics Nobel Prize.

Nordhaus was recognized for his work developing a model to guide policymakers on how best to address the costs and benefits of limiting greenhouse gases. That’s a noble goal, but Nordhaus’ work has no more helped to defuse the threat of global warming than Neville Chamberlain’s appeasement of Germany prevented World War II. Rather, Nordhaus’ low-ball estimates of the costs of future climate change and high-ball estimates of the costs of containing the threat contributed to a lost decade in the fight against climate change, lending intellectual legitimacy to denial and delay.

In Nordhaus’ 1993 paper, “Rolling the ‘Dice’: An Optimal Transition Path for Controlling Greenhouse Gases,” he wrote: “A growing body of evidence has pointed to the likelihood that greenhouse warming will have only a modest economic impact in industrial countries, while progress to cut [greenhouse gases] will impose substantial costs.” How modest? Nordhaus estimated that a 3 degrees Celsius warming would cost the U.S. economy a miniscule one-quarter percent of national income. He admitted that unmeasured and unquantifiable variables might affect that prediction, but in his view, they might only bring the cost up to about 1% of national income.

The U.S. still doesn’t have a carbon tax, in part because Nordhaus (and others who shared his views) underestimated the cost of doing nothingGiven such a tepid assessment of the threat, it is little wonder that Nordhaus’ biggest cheerleaders have come from the “do nothing about it” crowd. In 1997, for instance, William Niskanen, then chairman of the ultra-conservative Cato Institute, seized on Nordhaus’ estimates to argue before Congress that it was premature to take action on climate change because “the costs of doing nothing appear to be quite small.” Yet four years before his testimony, scientists had discovered that, in the past, climate changed quite abruptly and dramatically, not slowly and moderately as Nordhaus’ model assumed.

The warming we’ve experienced so far allows us to put this in context. Global temperatures are now 1 degree Celsius above pre-industrial levels, but even this increment has accelerated the melting of the ice caps, spurred sea-level rise and increased the frequency and intensity of storms, droughts and floods. It has also spawned myriad derivative impacts: the spread of tree-killing bark beetles that provide fuel for record-setting wildfires in the West, as well as intolerable temperatures and droughts in the Middle East and Africa that have contributed to war in Syria and destablilizing migration.

The IPCC report, released the same day Nordhaus got his Nobel, heightens the award’s absurdity. Nordhaus in 1992 estimated the net economic damage of 3 degrees Celsius of global warming, under a business-as-usual scenario, at $5.6 trillion globally (about $10.2 trillion in today’s dollars). The climate change panel now estimates the damage from 2 degrees’ Celsius warming to be $69 trillion.

Four years after climate scientist James Hansen told Congress that global warming was already happening, Nordhaus suggested that the “thermal inertia of the oceans” meant climate change would have a “lag of several decades behind [greenhouse gas] concentrations. That year, 1992, scientists studying ice cores taken from the Greenland Ice Sheet, confirmed that, in the past, climate had undergone huge swings in as little as a few years.

In fairness, Nordhaus has always recognized global warming as a threat. He advocates a tax on carbon, which is a good idea. If the price is right, a carbon tax would push people and industries to cut emissions without cumbersome bureaucracy.

Nordhaus has also revised and updated the model he developed as the IPCC has revised its forecasts, and he and his colleagues have (in their view) gotten a better grip on the variables at work in the interplay of climate and an economy. His most recent work implies an optimum tax on carbon at $31 a ton, which, in real terms, is about three times his too-low 1992 estimate.

Nordhaus and his colleagues concede that even with a $31-a-ton carbon tax, the planet would be on a track for 3 degrees Celsius of warming, but they don’t appear to recognize that such an increase would render much of the world unrecognizable and vulnerable to mass starvation (a number of studies predict yield declines of up to 70% for vegetables if the world warms beyond 2 degrees Celsius). In any event, 26 years after his first publications, the U.S. still doesn’t have a carbon tax, in part because Nordhaus (and others who shared his views) underestimated the cost of doing nothing.

Most economists famously failed to predict the near-collapse of the banking system in 2008, and it may be asking too much that such a “science” ace the far more complicated problem of estimating the impact of climate change. Still, it’s jarring that the same organization that in 2007 gave its Peace Prize to Al Gore and the IPCC for their efforts to come to grips with climate change, would, 11 years later, honor an economist whose work more undermined efforts to deal with the threat than helped them.

Eugene Linden is the author of “Winds of Change: Climate, Weather and the Destruction of Civilizations.”