Putin, Merkel, Macron and Erdogan meet in Istanbul to broker a deal in Syria

Germany And France Just Broke The US Boycott Of Syria

There weren't exactly any breakthroughs at the four-way summit involving France, Germany, Russia, and host Turkey in Istanbul on Saturday, but the event itself was a significant victory for one side in terms of optics.

Says Syria expert Joshua Landis: "The real importance of France and Germany going to Turkey to meet Putin and Erdogan is that they are effectively hiving off from the US by joining the Astana process." Ultimately, according Professor Landis:

They are breaking the boycott of Syria, while preserving the "need for elections" talking point.

Alas, as the photo op of summit participants suggests, the United States has indeed effectively been cut out of the Russia and UN-brokered Astana process to bring Syria's war to a close — which has both set the terms for the current shaky Idlib ceasefire agreement, and brought Turkey and Russia into an orbit of cooperation to seek long-term peace and stability. Notably Germany's Merkel and France's Macron now see the Russia-Turkey deal on Idlib as the only workable track that could stave off another mass refugee and jihadi influx into Europe, already reeling from a years-long migrant crisis.

And President Putin, sitting beside his European counterparts, still affirmed that Russia is in the driver's seat since its 2015 intervention in the war at the request of Damascus. Putin vowed during the summit: "Should radicals… launch armed provocations from the Idlib zone, Russia reserves the right to give active assistance to the Syrian government in liquidating this source of terrorist threat." 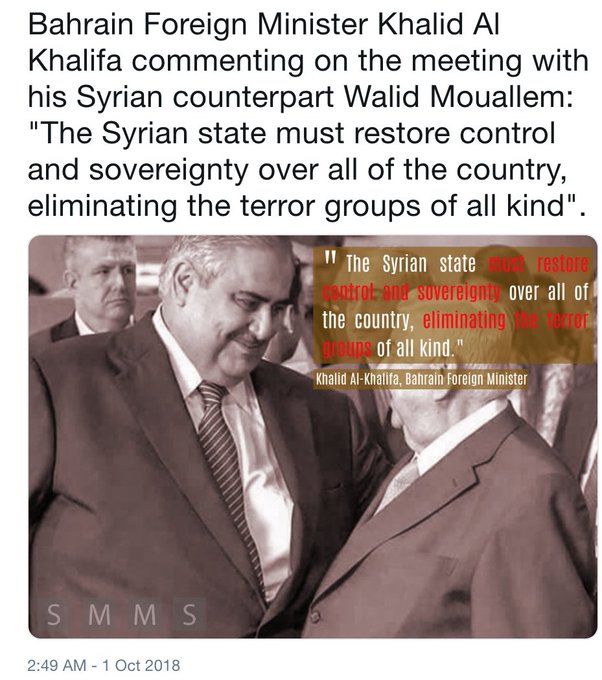 Joshua Landis✔@joshua_landis
Replying to @joshua_landis
It is a logical step forward after many Gulf countries, such as Bahrain and Kuwait, took measures to recognize the present reality of the Assad victory and work toward the normalization of relations between their countries.

Twitter Ads info and privacy
* * *
Below is a quick summary of agreed upon points issued in a communique by Turkey’s President Recep Tayyip Erdogan, Russia’s Vladimir Putin, France’s Emmanuel Macron and German Chancellor Angela Merkel at the conclusion of this weekend's Istanbul summit, via RT News:

Only political solution for Syria: The leaders have “expressed their support for an inclusive, Syrian-led and Syrian-owned political process that is facilitated by the United Nations.”

Need to start work on constitution in Geneva: A committee tasked with drafting a new constitution for Syria should begin its work as soon as possible, preferably before the end of this year.

No to division of Syria: Syria must continue to exist within its pre-war borders. Any separatist movements or desires of foreign powers to occupy parts of the country are therefore firmly rejected.

Keep ceasefire & defeat terrorists: The four countries have expressed their support for the Idlib ceasefire deal, brokered earlier by Russia and Turkey. At the same time, they emphasized the importance of fighting terrorism and condemned the use of chemical weapons.

Boost humanitarian aid: The United Nations and other international organizations should bolster aid deliveries to the war-torn country. “Swift, safe and unhindered” flow of humanitarian aid will provide much-needed relief to the sufferings of the Syrian people.

Help return of refugees: The four leaders stressed the importance of “safe and voluntary” return of refugees to Syria. To facilitate the process, appropriate housing and social care facilities must be constructed in the country.